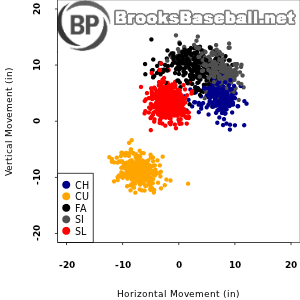 Zito’s velocity dipped pretty significantly last season, with his four-seam fastball dropping into the mid 80’s. The velocity has not recovered in 2012. He mostly sits around 83-85 MPH these days, occasionally reaching back and touching 86 or so. His two-seamer shows more horizontal break than the four-seamer, but it only flashes marginally more sinking action. Zito is famous for his big, slow 71-73 MPH curveball. The pitch still looks as pretty as ever, but it has been fairly hittable in recent years. He also throws a 74-77 MPH changeup and a 77-78 MPH slider. Overall, he does not miss many bats, as the changeup is his only offering with a whiff rate near league average. Zito has only struck 52 batters while walking 45 in 93.2 innings this year. He has been very fortunate to post a 3.84 ERA, and is unlikely to sustain that success moving forward.