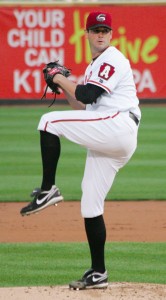 The Altoona Curve saw back-to-back solid starting pitching performances Friday night in Altoona for the doubleheader against New Hampshire. Right-handers Phil Irwin and Brandon Cumpton shined on the bump combining for just one earned run over 13.0 innings. First baseman Matt Curry drove in four runs on his 24th birthday in game two as the club took both games at People’s Natural Gas Field.

Phil Irwin was impressive for the Curve on Friday night. The right-hander needed just 76 pitches, 51 for strikes, to toss a complete game seven inning shutout in game one of the double-header against New Hampshire. It marked his third straight complete game this season. Irwin also struck out a season-high nine batters.

“Curveball in the strike zone and working my changeup in,” Irwin said of what is working for him. “Giving the hitters another look. Fastball command has been really good too. Everything is just coming together at the right time.”

Irwin allowed just three base runners in his 14th start of the season at Double-A. In the first, the right-hander allowed a two out single just over the glove of short for a hit. He then whiffed his next batter to end the frame.

In the fourth, Irwin issued a leadoff walk. His next batter laid down a sac bunt to push the runner to second base, but the right-hander was able to strand the runner after getting a fly out to center and struck out his fourth batter in as many innings to end it.

With one out in the fifth, Irwin gave up a ground rule double that bounced on the warning track and into the stands in left field. Irwin was able to put up another shutout frame after a groundout and strikeout

Irwin was impressive on Friday, but has been very good over his last six starts. That’s coming off a shaky month of May where he sported a 5-plus ERA after missing April with an injury that kept him in Bradenton after spring training. Since making some adjustments, Irwin has bee dominant on the mound. He’s allowed just five earned over his last 46.0 innings — just an 0.98 ERA. During that span he’s walked just four while striking out 36.

“Walking people has always been a big thing for me,” Irwin said. “I kind of pride myself on my control. That’s not really new for me, but it’s really good. It keeps guys off the base paths.”

The Curve improved to 52-52 on the season with the 1-0 shutout. The offense combined for just five hits and struck out nine times. Three of the five hits came int he second inning. With the bases loaded, Stefan Welch continued his solid campaign at Double-A with an RBI knock to right field. Welch entered game action hitting for a .310/.398/.478 line since being promoted.

Brandon Cumpton held New Hampshire to just one run on five hits over six frames. He didn’t walk a batter and struck out three while throwing 73 pitches, 49 for strikes.

The lone run that Cumpton allowed came in the first inning.  A leadoff single to left field started the inning. After retiring his next two batters, Cumpton gave up a single up the middle. But from there, Cumpton scattered just three hits over his next five scoreless innings.

Cumpton put together a solid month of June where he posted just a 2.59 ERA over five outings, and has a 3.75 ERA so far in July. Aside from one start this month, where he allowed six runs (four earned) over three innings, Cumpton has held the opposing team to three earned or less in every other start while pitching at least five innings.

The Curve plated eight runs behind Cumpton, who allowed just one earned. Brock Holt had a three hit night, while Adalberto Santos picked up a pair with an RBI and a triple.

During spring training, Matt Curry worked on shortening his leg kick. After hitting just .242 over 87 games at Double-A Altoona in 2011, Curry made the adjustment to cut down on his strikeouts. The first baseman hit .307/.381/.400 in April, but struggled in the following month and wound up on the disabled list in on June 3rd. But since returning from the hamstring injury, Curry has been on a tear going 35-for-102 (.343) with 10 doubles and five home runs.

“I’ve kind of picked it up a little bit more,” Curry said of his leg kick . “Just making adjustments throughout the year. Just little stuff like that. I don’t really focus on it too much. I’m just looking to get my foot down and going from there.”

“I’m seeing the ball. I’m driving balls the other way. I think I’ve hit a few more opposite home runs than I have in the past. I’m staying on balls and it’s helping me stay on the off-speed and get hits on that, too.”

Curry made the aggressive jump during the 2011 season from Low-A West Virginia to Double-A skipping High-A Bradenton altogether. Skipping levels isn’t common, in fact he was just the third to do so for the Pirates. The first baseman, who was drafted by Pittsburgh in the 16th round of 2010, is gaining more experience at the level this season with better results.

“Last year was my first full season,” Curry said. “When I got called up to Double-A, I didn’t really know what to expect. This year, I knew what to expect coming in and knew that I could hit this pitching and I’m going from there. I have the confidence that I had from last year and I’m just trying to carry it over.”

Curry drove in four RBI in game two of the doubleheader for the Curve.

Back-to-back singles started the bottom of the first inning from Brock Holt and Adalberto Santos. With one out, Matt Curry drove in a run with a RBI groundout. Curry also launched a three-run homer to left field in the third inning.