Pirates Notebook: Not a Good Return For Karstens 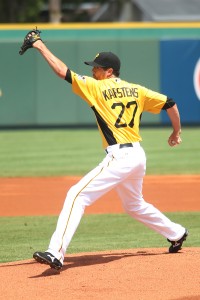 Jeff Karstens was activated off the disabled list on Monday and made his first start of the season since April 17 against Arizona. However, the right-hander struggled, and the sloppy defense behind him didn’t help the cause.

Three of the four runs scored in the first frame were charged to Karstens in his fourth start of the season. The rough first frame started after Jimmy Rollins doubled down the first base line to lead off the inning and advanced to third base on the sac bunt from veteran Juan Pierre. Hunter Pence followed by dropping a single into shallow right field to plate the first run of the inning.

A series of miscues by the defense allowed three more runs to score. Four straight one-out hits connected off Karstens, where the team sailed the ball all over the windy infield.

Carlos Ruiz was the first hit to right. Jose Tabata’s throw to second base was high, allowing Ruiz move to second base. Pedro Alvarez attempted to get the catcher Ruiz at second base, and he too, committed an error. The ball sailed into right field allowing the second run to score and push Ruiz to third base.

Shane Victorino followed for the third straight hit with a base knock to center to plate a run. The third error — second of the inning by Tabata — came after Placido Polanco hit a single up the right side. Tabata once again sailed the ball to third allowing a fourth run to score. Karstens struck out his next two batters to end the inning, but the right-hander needed 28 pitches in the frame.

It marked the fist time since July 4, 2011 against the Houston Astros that the Pirates committed three or more errors in a nine inning game.

The right-hander bounced back from a rough first inning by retiring the side on 10 pitches in the second. He struggled again in the third and allowed a two-out RBI single to Polanco. Karstens allowed his final runs in the fourth frame when Jimmy Rollins took a 3-0 pitch for a two-run shot.

Overall, Karstens allowed seven runs (six earned) on 11 hits over five innings. He struck out four while throwing 97 pitches, 60 strikes. It was the first time in the last six starts that the Bucs starting pitcher was charged with two earned runs or more. The starting staff posted a 1.17 ERA entering game action during that span.

Catcher Rod Barajas was replaced by Michael McKenry in the second inning after injuring his knee in the bottom of the first.

Jose Tabata threw to the plate to attempt to nail Jimmy Rollins at home after Hunter Pence singled into shallow right field.  Rollins was safe at home, but Barajas injured his knee on the close play. The catcher remained in the game for the rest of the inning, but McKenry pinch-hit for him in the second and finished the game behind the plate.

The team announced that Barajas was removed with a bone bruise on the left knee. Barajas will be treated and re-evaluated today and tomorrow.

Hughes is Cleared After Throwing on Flat Ground

Jared Hughes was deemed unavailable from the Pirates bullpen on Sunday afternoon for what Manager Clint Hurdle called a “physical condition”. Neither Hurdle, nor Hughes said as to where specifically (arm, shoulder) the right-hander was injured after the game on Sunday, but Hughes said he would be fine.

“It’s more of a physical condition that we are trying to work through. We gave him two days off and we’ll see where we will be tomorrow,” Hurdle said on Sunday. “It’s been for a couple of weeks. I’ll just leave it at that. It’s been bothering him but it ramped up a bit where it wasn’t as pain manageable as he thought it was.”

After throwing on flat ground this afternoon, Hughes was cleared to pitch in relief. Hughes tossed a scoreless inning on Monday with a strikeout.

Lincoln Unavailable Until Wednesday From ‘Pen

Brad Lincoln is not available until Wednesday from bullpen. The right-hander was removed from the rotation on Sunday in order to open up a spot for Jeff Karstens. Lincoln was coming off an impressive six inning performance on Saturday where he allowed just one run on two hits and struck out a career-high seven batters. In 20 innings in relief, Lincoln has allowed just one earned run (0.45 ERA) while whiffing 23 this season.

“It’s a move they had to make,” Lincoln said. “They had to make room for Karstens. It’s just one of those things you accept it and you play with it. I want to stay in the starting rotation, but I also want to be in a position to help the team. They believe in me to have a role in the bullpen and come in, in certain situations. We’ll roll with it and see what happens.”

Sutton To Join Team on Tuesday

Infielder Drew Sutton is expected to join the Pirates on Tuesday on Philadelphia. Pittsburgh reclaimed Sutton on Sunday afternoon off waivers from Tampa Bay. He was added to the 40-man roster when the team transferred Charlie Morton (Tommy John Surgery) to the 60-day disabled list.

Upon joining the club, the Pirates will have to make a move on the active roster. They are currently carrying an extra arm in the bullpen (13 pitchers, 12 position players), so a reliever will most likely be the one to go in order to balance out the roster. Only Jared Hughes and Brad Lincoln have options remaining in the bullpen.

Candidates to go could be Chris Resop or Doug Slaten, although either one would have to be designated for assignment. They would risk losing either player on waivers if the club decided to go that route. Resop has posted a 3.14 ERA in the month of June after a rough May (5.40). Slaten has a 2.92 ERA since joining the Bucs in May. The lefty allowed one run on a hit and three walks over two innings of relief on Monday.