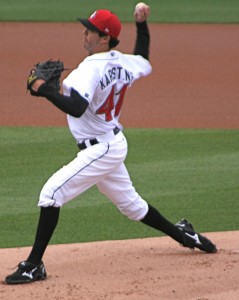 Right-hander Jeff Karstens met his 80 pitch goal mark during his third rehab start with Triple-A Indianapolis on Friday, but he will make one more outing before rejoining the Pirates.

Karstens threw five innings and allowed two earned runs on six hits. He walked one and struck out six while throwing 82 pitches, 58 strikes. After tossing two perfect innings, Karstens’ pitch count got ramped up in the 3rd inning after the Indy defense committed an error. Four unearned runs scored in the frame. The two earned runs came off a two-run homer in the 5th.

The 28-year-old, who went on the disabled list on April 18 with right shoulder inflammation, will make his final rehab start with Indy on Wednesday, where he will attempt to hit to 100 pitch mark.

Righty Brad Lincoln is set to make his second spot start of the season on Tuesday in Cincinnati, but the 27-year-old could get the nod for a third one with Karstens still on the DL.

If no issue, Karstens would be able to return from the DL to make a start on June 11. Which means Lincoln would get the opportunity to be penciled in for another spot start on the 10th at PNC Park against Kansas City.

Lincoln allowed two runs on four hits over 6.0 innings against Miami in his first start this season in Pittsburgh. He’s posted just an 0.45 ERA over 20.0 innings from the bullpen — third lowest-ERA in the Majors.

Left-hander Erik Bedard bounced back against the Chicago Cubs on May 27 by tossing six scoreless frames after allowing a combined eight runs over his two outings prior.

“Sometimes you’ll have a couple starts where you don’t do good. You try and bounce back and I tried to do that,” Bedard said after holding Chicago to just two hits.

Bedard tossed a scoreless first inning, which included a caught looking punchout to Carlos Gomez to start the game. But he worked himself into a jam in the 2nd inning. A leadoff double into the gap by Aramis Ramirez started the rally. Bedard walked his next two batters to load the bases with no outs. The lefty was able to escape by allowing just one run to score — a sacrifice fly by Brooks Conrad.

The veteran whiffed two in the third, but worked himself into another jam, one that he wasn’t able to finish on his own. Ramirez led off the inning with a single to left field. Two straight hits followed to plate two runs before Brooks Conrad took a 3-1 fastball into the seats in right field. The homer by Conrad snapped his 0-for-27 skid to start the season.  Bedard walked a batter, then an error by third baseman Pedro Alvarez put runners on corners to end his outing. Reliever Chris Resop ended the inning with a strikeout to Corey Hart.

Overall, Bedard allowed five runs on five hits over 3.2 innings. He walked three and struck out five while throwing 86 pitches, 52 strikes. 38 of those pitches were from the four run 4th frame.

The Hit Collector Keeps on Hitting

While the Pirates were only able to combine for five hits and a run off the Brewers’ Shaun Marcum, one of those knocks came off the hit collector, who continues to impress since being recalled from Triple-A on May 25.

Rookie first baseman Matt Hague singled up the middle in his second at-bat against Marcum in the 5th inning. The base knock extended his hit streak to eight games. Since being recalled, Hague has had at least one hit in each of his eight starts while hitting .333 (9-for-27) with two doubles and three RBI. He’s now hitting for a .286 clip on the season — second-highest average on the club.