Exploring the Arsenal will run prior to each series, providing you with a brief scouting report on the starting pitchers expected to oppose the Pirates. The charts below show the horizontal and vertical movement of every pitch thrown by that particular pitcher in 2012. These charts are from the catcher’s point of view. For a general guide to pitch types for a right-handed pitcher, please check out this image created by Sons of Sam Horn. Graphs are courtesy of Brooks Baseball and The Hardball Times . 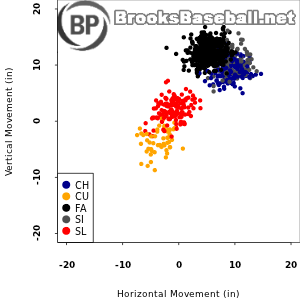 Chen has a deliberate delivery and appears to fling the ball toward the plate with uneven arm action. His fastball generally sits around 90-91 MPH, occasionally touching 94. He likes to go to his tailing two-seamer on the outer half against right-handed batters. Despite the average velocity, he has missed a good number of bats with the heater. His primary breaking ball is an 80-82 MPH slider, which he leans on heavily against lefties. He also mixes in an occasional slow low 70’s curveball, a pitch that is difficult to put in play. Chen does a decent job of locating his 82-83 MPH changeup down and away to righties, generating mostly weak contact with the pitch. 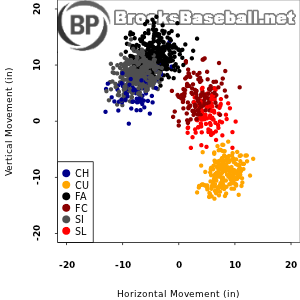 Arrieta throws hard, with a four-seam and two-seam fastball that both sit around 93-94 MPH. He throws a slider in the upper 80’s and a cutter around 90 MPH. Other than the difference in velocity, these two offerings are difficult to distinguish from each other, and might actually be a single pitch. Arrieta also throws a big upper 70’s curve and an upper 80’s changeup. He has been pretty hittable in the past, but has missed a decent number of bats with his changeup and slider this year. He also generates loads of ground balls with his curveball. 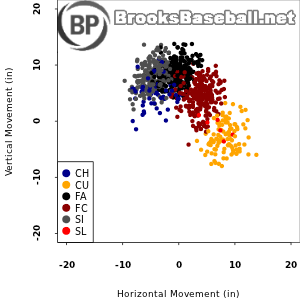 Hunter throws his fastball around 89-91 MPH and can ramp it up to 94 at times. His four-seamer is fairly straight, while his two-seamer flashes occasional good, late arm-side movement. He throws an upper 80’s cutter, a low 80’s changeup and an upper 70’s curveball. The curve moves quite a bit horizontally, but it breaks early and is not very deceptive. He also tends to leave it up in the zone fairly often. Hunter has leaned heavily on his fastball/cutter combo this year, going to the soft stuff on fewer than a fifth of his pitches. He is one of the most hittable pitchers in baseball, with strikeout and whiff rates that are among MLB’s worst in 2012.