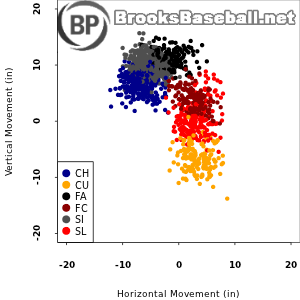 Blanton has a diverse repertoire, with about six different offerings that he goes to at least 10% of the time. His main pitch is an 88-91 MPH two-seam fastball, which he uses frequently on the arm-side of the zone. He throws his four-seam fastball around 89-91 MPH and maxes out at 93-94. He tends to work up in the zone with the four-seamer. Blanton also throws an 86-89 MPH cutter, often in on the hands of lefties. He throws two different breaking balls, a slider around 82-84 MPH and a slower curve in the upper 70’s. Blanton’s final pitch is an 82-83 MPH circle change. The changeup is his best strikeout pitch, with a whiff rate over 40% in 2012. Blanton missed a lot of bats with his slider last year, but the pitch has been very hittable in 2012. He has managed to generate plenty of ground balls with his secondary stuff so far this year, but he is allowing a lot of balls in the air overall. Blanton does not alter his pitch selection too much based on the opposing batter’s handedness. He goes to his changeup more frequently against left-handers, but also mixes it in pretty regularly against righties.