Can McGehee Bounce Back to His 2010 Form? 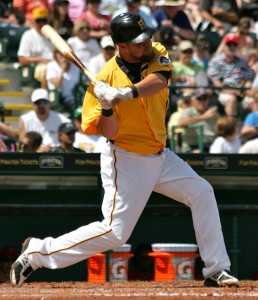 CLEVELAND, OH — Over the past three or four weeks Casey McGehee said he felt like something had started to click for him at the plate. Even though he’s started in nine of the last 11 games, McGehee said he noticed a difference even coming off the bench, and that he was starting to feel like his old self.

“Just really trying to be stubborn and stick to what I know I’ve been successful with in the past,” McGehee said of his adjustments. “Obviously when you get a couple balls to fall in you start feeling a little bit better about what you’re doing and it’s a little bit easier to keep believing that you’re on the right path of what you’re trying to do.”

“It definitely helps having a number of days in a row where you’re getting consistent at-bats, where you kind of get in the flow of the game a little bit. I think a big thing is just trying to be as stubborn as I can and not try and keep looking for quick fixes. I think sometimes that gets me in trouble, trying to make everything better, fix something after one swing and never committing to one thing. I’m trying get better at that this year.”

When McGehee reported to spring training for the first time as a Pittsburgh Pirate in Bradenton Florida, the infielder described 2011 as a “nightmare season.” McGehee hit just .223 over 155 games. The two years prior, the 29-year-old belted 16 and 23 home runs, respectively, while driving in over 100 RBI’s.

When the Pirates traded reliever Jose Veras for McGehee on December 12, 2011, they believed that he would bounce back to the player that he was with Milwaukee when he was named their MVP in 2010. Over the last several weeks, he’s been showing signs of that.

“The last three or four weeks, even my at-bats coming off the bench I feel like there was something starting to click for me,” McGehee said. “Something felt a little better whether I was getting balls to fall in or not. I’m starting to feel like my old self again. One thing that I’ve been happy with is I’ve been waking a lot this year. A lot more than I ever have in the past. I think that’s important especially when you’re not getting balls to fall in, you’re still getting on base. Just try to help out that way. That’s something that I’m pleased with, but it’s definitely nice to see some hits fall in too.”

After starting April out hitting for a .269 clip, he struggled in May and hit for a .104/.214/.125 line. So much in fact that when he finally hit his first home run of the season — on June 5 — the club gave him the silent treatment in the dugout.

“He’s getting hits,” Hurdle said. “His tempo is better. The balance is better. He’s seeing the ball, No.1 better. I think there’s a lot less movement going on. I think he’s freed himself up mentally. You’re seeing that strong stroke to right-center field again that we’ve seen against him when he was swinging the bat. He pounded two balls in the last 10 days to right field for homers. He’s just finding his way back.”

McGehee has four multi-hit games in his last six contests, going 10-for-23 with a double and two home runs. The infielder is hitting .366 along with a 1.117 OPS in 13 games so far this month.

Although he’s been swinging a hot bat as of late, Hurdle is pleased with the way that McGehee has been able to find his way back to the boat. It’s an analogy that the Pirates’ skipper has been trying to share with not only McGehee, but some of the other bats that have been struggling to get going this season.

“If you ever go white water rafting, one of the first things they’ll tell you is if you fall off the raft, how you react is up to you, but panic isn’t really an option,” Hurdle said. “And forget about your boat coming back to you. You’ve got to find your way back to the boat. They make that perfectly clear. Calm your senses, regroup and find your way back to the boat. They’ll do what they can do, but they’re not going back that way.”