Coming in to the season, Pirates Prospects was higher on center field prospect Starling Marte than most.  We had him ranked as our number two prospect, ahead of guys like Stetson Allie, Tony Sanchez, and Luis Heredia.  The ranking actually drew some criticism, with most of the criticism pointed to his high strikeout rates, suggesting that his high average wouldn’t translate over to the upper levels.  Marte had a .312 average in low-A in 2009, and a .315 average in high-A in 2010.  He struck out 29.4% of the time in 2009, and 26.6% of the time in 2010.  He also wasn’t walking much, with a 5.3% walk rate in 2009, and a 4.7% walk rate in 2010.

As far as offense went, Marte was basically getting by with his average.  He wasn’t drawing many walks, and he wasn’t hitting for power, with three homers in 221 at-bats in low-A, and no homers in 222 at-bats in high-A.  His defense is spectacular, with great speed, and a very strong arm.  That speed also makes him a threat on the bases, with 50 steals between low-A and high-A.  But a speedy, strong defensive center fielder only gives you so much without offense.  And with Marte’s only offensive production being a high average, and that high average coming with a high strikeout rate, there was some cause for concern.

So far this season, Marte hasn’t shown any reason to be concerned.  He’s got a .337 average in 255 at-bats after tonight’s 4-for-6 performance.  He still isn’t walking much, with a 3.7% walk rate.  However, he’s striking out at a much lower rate, currently 19.2%.  Best of all, he just hit his 4th homer of the season, along with his 15th and 16th doubles of the year.  That’s not much power, but over a full 550 at-bat season it projects in to about 10 homers and 35 doubles.  That’s very significant when you consider that Marte had the hook of his hammate bone removed last year, a procedure which can sap a player’s power for at least a year.

Marte already has the strong defense.  He’s starting to show a little power, and while he doesn’t project as a big home run hitter, his speed will give him plenty of doubles and triples, and he might even be capable of double digit numbers going forward.  He also hits for a great average, although people will still point to the walks and strikeouts.  The reason that’s not a concern is simply his speed.  Marte is so fast that he can bunt his way on for a single.  He can beat out ground balls to the left side of the infield to add extra hits.  For those two reasons, his average is always going to be high.  The encouraging thing is that he’s striking out less this year than in previous years.  His speed allows him to hit for average, even with the strikeouts.  That said, fewer strikeouts means more balls in play, and more balls in play means more chances to get a hit, whether that’s due to his speed or due to his bat.  Between his increased power, and his drop in strikeouts, Marte is really living up to his prospect hype, and best of all, he’s doing it in the upper levels.

Game Notes: Justin Wilson was wild tonight, throwing 62 pitches and 31 strikes.  He allowed five earned runs on six hits and three walks in two innings.  Matt Hague’s homer was his fifth of the year.  He also now has 12 doubles, which is a little low, as he had 30 in each of the last two seasons.

Game Notes: Starling Marte got the game going with a lead off homer for Altoona in the bottom of the first.  Jeff Locke had some trouble, allowing four runs in three innings, including three in the third.  He also had a wild pitch and a balk.

Game Notes: Jordy Mercer hit his 13th homer of the year, putting him in the lead in the Pirates’ organization.  Starling Marte went 2-for-3 in both games of the double header. 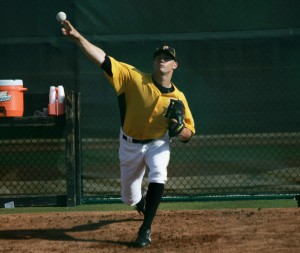 Game Notes: If there’s one knock against Tyler Waldron, it’s that he’s been too prone to giving up homers.  In his last ten starts, including today, he’s allowed 12 homers.  Today was the fourth time in his last ten starts that hes allowed multiple homers.  Shortstop Drew Maggi has a lot of speed, but hasn’t used that efficiently on the bases this year.  Maggi drew a walk today to get on base, then was picked off and caught stealing.  It was the 12th time he’s been caught stealing this year in 25 attempts.

Game Notes: Wes Freeman hit his first homer of the year, but it also came with two strikeouts in four at-bats, which has been the usual for him in his career so far.  Ryan Hafner pitched just two innings in the GCL last year, after signing for $450 K as a 17th round pick.  He allowed two runs on three hits in those innings, but had much better results tonight.

Game Notes: Goris is the only person in tonight’s lineup with an average over .283.

Game Notes: The stolen base for Herrera was his seventh.  The Pirates only managed three hits.