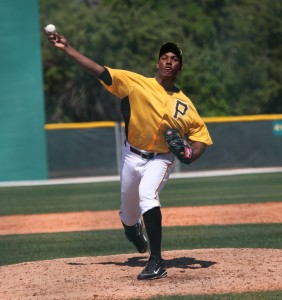 Aguero was claimed by the Texas Rangers.

The Fort Worth Star-Telegram is reporting that the Texas Rangers have claimed Ramon Aguero off waivers from the Pirates and added him to their 40-man roster. The Pirates removed Aguero from their 40-man at the beginning of the season to clear space for Jose Veras.

The Pirates added Aguero to the roster after a 2009 season in which he made his way to AA from the low minors on the strength of a fastball that reached 97 and a good change.  He spent much of 2010, however, struggling with injuries and posted an ERA of 8.68 in 17 games at Altoona.  This spring his velocity was down in the low-90s, so it wasn’t surprising to see the Pirates designate him for assignment.