There was quite a bit of discussion regarding the role of umpiring in the Pirates’ 6-5 loss to the Colorado Rockies on Sunday afternoon. In particular, attention was focused on Mike Crotta’s relief outing in the seventh inning of that game. Crotta walked three of the four batters he faced, helping the Rockies score twice and take a lead they would not relinquish. Pitch f/x data collected by Brooks Baseball indicated that several pitches thrown by Crotta were called balls despite possibly being inside the strike zone. In the ninth inning, the frustration of Pirates fans was intensified by debatable strike calls with Steve Pearce and John Bowker at the plate.

To my recollection, this was the second instance of this young season in which the Pirates strike zone did not seem to match that of their opponents. After speculating that I was probably just selectively remembering the events due to my biased fandom, I decided to dig deeper. So I updated my Pitch f/x database for the first time this year and began pulling some data. The graph below shows all 2011 called strikes for Pirates pitchers in blue, and called strikes for opposing pitchers in red. Please note that the height of the strike zone is just an estimate, as it changes for every batter. 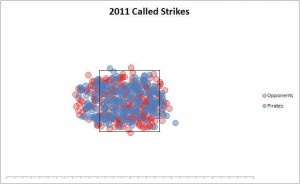 It seems clear from this graphic that opposing pitchers are benefiting from a slightly larger strike zone than Pirates pitchers are receiving, particularly on the corners. Most likely, this is just a sample size issue. We are only 11 games into the season, so a game or two of wacky strike zones can really skew the results. If one were to conduct this type of study for other teams, I am sure we would see similar results for several teams.

Update (4/15/2011, 12:05 AM): Per a request in the comments, here is an additional chart. I added pitches thrown by Pirates pitchers that were called balls. 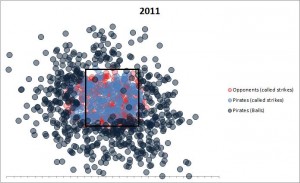