I’ve been down here for five days, and have shot around 2000 photos.  Granted, some of those are multiple shots, using the rapid fire feature on my camera, but to illustrate how often I’ve used the camera, I’ve got a tan line of my camera strap on the back of my neck from having it with me all week.  Aside from talking with Neal Huntington for about 45 minutes yesterday (interviews will go on the site on Monday), I haven’t done much beyond watching players and shooting pictures.  Today I came to Pirate City ready to do some interviews and get some answers about some of the things I’ve seen so far in camp.

I talked to Jameson Taillon, Jeff Inman, Calvin Anderson, and Kyle Stark today.  I posted the feature on Taillon earlier this evening.  If you’re wondering what Taillon has been working on this Spring, and more importantly, where he will start and when, I suggest you check it out.  Quick note: he won’t be starting the season in West Virginia.  The Pirates will be limiting his innings, and don’t want him pitching in the cold weather at the start of the season.  They also would rather see him finish the season at the end of the year, rather than reaching his innings limit in July and taking the final month off.

I will have the features on Inman and Anderson up tomorrow.  I didn’t really do an interview with Kyle Stark.  Charlie at Bucs Dugout did a great interview with him (part one and part two), and I didn’t have much to add.  Instead, I asked questions about specific players, to be used in feature articles in the next week or two.  Some of the topics we covered: the log jams at first base in high-A (Calvin Anderson, Aaron Baker, Matt Curry), the log jam at shortstop in high-A in 2011 (Benji Gonzalez, Elevys Gonzalez, Jarek Cunningham, and Drew Maggi), the handling of guys like Taillon and Stetson Allie, and a few other specific players, including Robbie Grossman.

Here are the notes from Pirate City today:

Owens started the AAA game against the Yankees’ affiliate, and had a great outing.  He was working in the 91-93 MPH range with his fastball, and hitting all of his spots as usual.  I watched him record a strikeout with a well placed 92 MPH fastball at one point.  He ended up pitching four shutout innings, allowing just three hits, no walks, and striking out six.  He was very effective against left handers, completely shutting them down.

There’s a lot of comments that Owens is just another in the line of Pirates’ pitchers from Zach Duke, Paul Maholm, and Tom Gorzelanny, all the way to Brad Lincoln.  Anyone who is saying this hasn’t seen Owens pitch, or is just making the connection due to the organization.  I’ve seen Owens more than anyone not affiliated with the Pirates.  I saw him a lot in 2009 when he was a soft tossing left hander, throwing 88-91 MPH.  I saw him in Altoona in the early part of the 2010 season, when he was carrying his success over to the higher levels.  I saw him later in the year when he saw his velocity increase to 90-93 MPH, absolutely dominating opposing hitters.  Today I saw him throwing 91-93 MPH, and continuing his domination.

Most people haven’t seen Owens pitch, so it’s easy to assume he’s just the next Pirates pitcher who won’t live up to expectations.  I’m convinced that if he was with another organization, he wouldn’t get these comparisons to the past prospects in the organization.  I’m also predicting that Owens will surprise a lot of people when they see him for the first time, and see how effective he is, and based on his performance today, I’m convinced that will come no later than June 2011.

Yesterday I watched Quincy Latimore taking batting practice, hitting for power to all fields.  Today I got to watch him in a game, playing against guys who are mostly in the lower levels.  Latimore suffered an oblique injury this Spring, which has kept him out of action some during Spring Training.  Today he looked fine, and put on a huge power display.

In an inter-squad game, facing Cliff Archibald, Latimore sent a 91 MPH fastball to deep center field, hitting the batter’s eye, which is 410-415 feet away.  Not only did he hit the batter’s eye, he hit it half way up.  That was good enough for a triple, with Quincy beating the throw to third (and the ball bouncing off his helmet, although he was fine).  Later in the same game, he hit a home run off of left hander Porfirio Lopez to left-center field.

Latimore was one of the players I discussed with Stark, and more will be written about him in the future.  He displayed a lot of power last year, with 19 home runs.  That power is definitely legit, from what I’ve seen over the last two days.

Ascanio started the AA game, and only pitched one inning.  He was only hitting 90-91 MPH with his fastball, and also mixing in an 81 MPH slider.  His command wasn’t impressive, and he ended up reaching his pitch limit with two outs, allowing at least one run in the inning.  Ascanio is out of options, and didn’t look good at all today, especially when you consider it was against high-A and AA talent.  It wouldn’t surprise me at all if he was designated for assignment, and at this point it wouldn’t be a loss if another team claimed him.  With a low-90s fastball, Ascanio loses a lot of the appeal that once made him a back of the bullpen candidate.

Kyle McPherson pitched a few innings after Ascanio was removed.  McPherson was sitting at 92 MPH consistently.  When he elevated the ball, he got hit around.

Brian Leach came on late in the AA game.  He started off throwing 92 MPH, and ended up in the 94-95 MPH range.  He also displayed an 84 MPH slider.  He was missing high a big with his fastball, and after the outing went to throw a bullpen session with Jim Benedict instructing him.

Ramon Aguero pitched two innings today.  He was throwing around 91-92 MPH in the first inning, with an 82-84 MPH slider.  In the second inning he was mostly throwing in the low 90s, although he did touch 95, and had back to back 94 MPH pitches to strike out a batter.  His command left him and he was removed in the second inning of work.

Tom Boleska came on to replace Aguero, getting the final out in the inning with an 89-90 MPH fastball.  He was impressive in his first full inning, throwing 92 MPH, and touching 94.

A few of the lower level pitchers that threw today:

-Mitchell Fienemann was around 86-87 MPH

-Orlando Castro was sitting around 84 MPH

-Bryce Weidman was working in the upper 80s.

-Dovydas Neverauskas threw today, working in the low-90s again, just like he did on the 20th.

-Tony Sanchez’s head seems to be a magnet for baseballs.  Today, while on second base in the AAA game, the catcher made a pickoff attempt, which ended up hitting Sanchez in the head on a bounce as he was sliding back to the bag.  He wasn’t hurt, but it’s phenomenal how often that happens to him, and it never seems to be when he’s behind the plate.

-I’m very impressed with Willy Garcia so far.  Garcia was the Dominican outfielder who signed for $280 K last year.  He’s shown some good speed, getting a triple off of Stetson Allie yesterday (his speed turned what would have been a double for most in to that triple), and then making a nice running catch in right field today, which I caught on camera.  You can kind of tell by the position how far he had to range to make the catch. 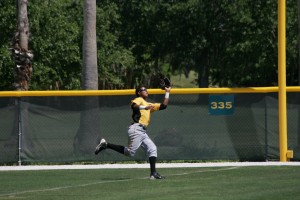 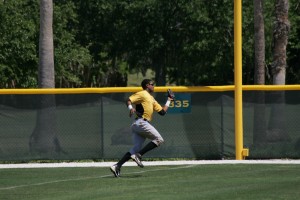 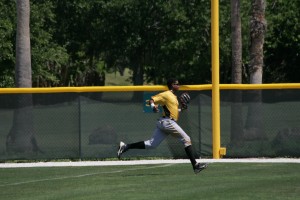 -Funny scene in the inter-squad game.  The base runner was caught between first and second base, with a runner already at second, most likely on a botched hit and run.  Both runners were stranded as the catcher ran right to the runner at second.  After a short run down on second, they threw to third base to catch the second runner, trying to advance to third.  Suddenly, everyone on the field stopped, as if they had never participated in a run down.  That included the base runners.  Finally, the third baseman chased after the runner at second base, tagged him, then sprinted across the field and tagged out the runner from first base as he tried to return to first.

The play was completely bizarre, and was witnessed by about 10-15 players who were not participating in the game.  After a few seconds, and a comment from the coaches on the field, everyone on the field dropped down and started doing pushups.  To see a Little League-esque rundown, followed by 10-11 players dropping down at once to do push-ups for their poor play was hilarious.  To top it all off, the players who were watching all burst out in to laughter when the players on the field dropped to do their push-ups. 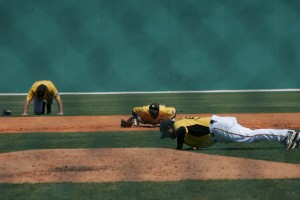 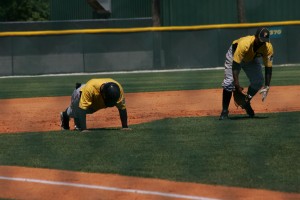 -One of the places I shoot photos is located between the two fields.  A lot of the pitchers, when they aren’t pitching, are watching games from this location.  Today, while shooting photos of the AA game, I noticed the pitchers that were sitting in front of me: 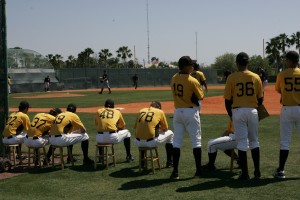 Tomorrow I’ll have the Jeff Inman and Calvin Anderson features up.  I’ll also be speaking with Duke Welker, and I’m hoping to catch up with Jim Benedict to talk to him about some of the approaches the Pirates are taking with their lower level pitchers.