It is clear that the most significant roadblock standing between Pedro Alvarez and elite level offense is his issue making contact. In his rookie season, Alvarez struck out in 119 of his 386 plate appearances, a rate high enough to be a legitimate concern. He made contact on less than 70% of his swings, one of the ten worst contact rates among players with 300+ plate appearances in 2010. Let’s head to the Pitch f/x database to see if we can determine a particular pitch or location that was giving him problems.

Here are the pitch locations for every pitch that Alvarez offered at in 2010. As a reminder, this is from the catcher’s point of view. I added an approximate strike zone. Black dots represent pitches Alvarez made contact with, including foul balls. Red dots indicate pitches that led to a swing-and-a-miss. 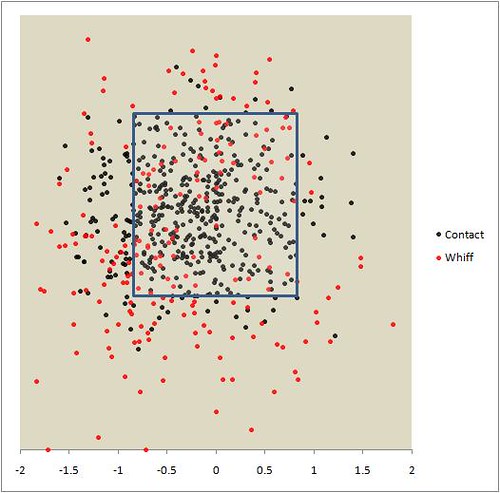 There does not seem to be much of interest here. As expected, Alvarez generally came up empty on pitches well outside the strike zone. Simply learning to lay off those pitches could improve his contact rate considerably.

Here is each pitch that Alvarez came up empty on in 2010, categorized as one of three pitch types. Black dots are fastballs. I included all two-seamers, four-seamers, cutters, sinkers, etc. Red dots are offspeed pitches, including changeups, splitters, knuckleballs, etc. Blue dots are breaking balls, including curveballs and sliders. I used the pitch classifications included by MLB in the Gameday data. 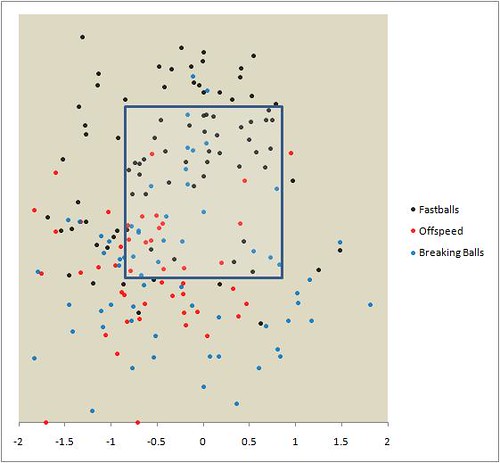 This is more interesting, and maybe a bit disconcerting. Alvarez struggled with high fastballs. He had trouble laying off breaking balls down and out of the strike zone. Offspeed stuff down and away also gave him fits. None of these are terribly surprising when assessed individually, but collectively, they could cause a problem. Alvarez is essentially struggling against everything, meaning he has numerous adjustments to make in order to take his offensive game to the next level. That’s not to say he can’t do it, but things would have been much simpler if there was just one type of pitch causing him trouble.