While glancing at the Win Expectancy chart for last night’s Yankees-Rangers game, I realized that FanGraphs also has these charts for historical games. I’m pretty sure I already knew that, but for whatever reason I had never taken the time to sift through some older games. Here is a look at some of my all-time favorite Pirates games.

5/6/1988 – San Diego Padres vs. Pittsburgh Pirates
This is my first vivid Pirates memory, a game that occurred about a month after my 4th birthday. It was Richard Caliguiri day at Three Rivers Stadium, as the Pirates honored the Pittsburgh mayor who had passed away earlier in the day. It was a pretty quiet game, with each team posting a run in the 1st inning. The score remained 1-1 until the bottom of the 12th inning, when Sid Bream stepped to the plate and lifted a three-run home run to right-center field. 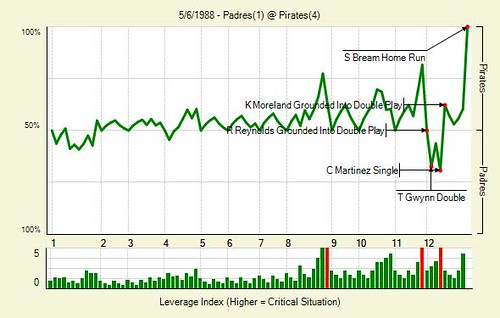 5/28/1990 – Los Angeles Dodgers vs. Pittsburgh Pirates
On a rainy Memorial Day, bench clearing confrontations and multiple ejections overshadowed a dominant eight innings from Tim Belcher, as the Dodgers handed a 5-1 lead to their bullpen to start the 9th inning. The Pirates immediately went to work. Wally Backman singled. Jay Bell doubled. Backman scored on a wild pitch. Andy Van Slyke walked. After Bobby Bonilla grounded sharply into a force-out (scoring Bell) and Barry Bonds popped out, Bream bounced a single to center. Don Slaught drew a walk, loading the bases for the light-hitting Jose Lind. On a 3-2 pitch, Lind slapped a ground ball past a diving Eddie Murray at first base. Bonilla scored, and pinch-runner Gary Redus followed moments later to tie the game. When the throw from right field bounced away from catcher Mike Scioscia, Slaught came chugging all the way from first base to win the game. 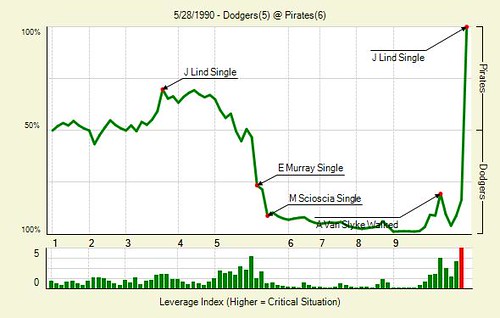 4/21/1991 – Chicago Cubs vs. Pittsburgh Pirates
This was one of the wildest Pirates games in the team’s history. With the Bucs already trailing 3-2 after seven innings, the Cubs seemed to put the game out of reach with a four-run 8th. But the Pirates responded with four runs in the bottom of the inning, highlighted by a three-run bomb by Bonilla. When Gary Varsho doubled home Jeff King in the 9th, the game was destined for extra innings. After a quiet 10th inning, the Chicago bats came alive once again in the 11th. With one run already in, Andre Dawson launched a grand slam to put the Cubs up 12-7. But the Pirates did not quit, as they immediately began chipping away in the bottom of the 11th. Bell doubled home two runs. Van Slyke brought home another with a sacrifice fly. A Bonds single made it 12-11, and a Redus pinch-hit walk loaded the bases for Slaught. Finally, Slaught put the game away by launching a ball over the center fielder’s head to score Bonilla and Bonds. 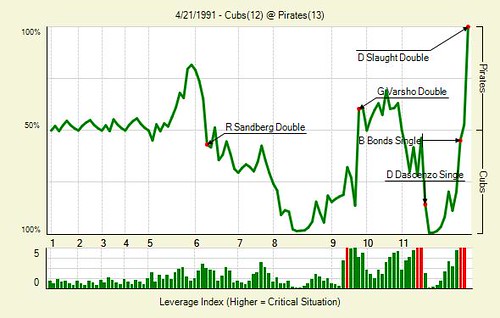 7/4/1997 – Pittsburgh Pirates at St. Louis Cardinals
This was just one of many thrilling Pirates victories in the 1997 season. Trailing 5-4 with two outs and the bases empty in the 9th inning, Jose Guillen reached on a pinch-hit single. The game appeared over when Tony Womack lifted a lazy fly ball directly at left fielder Ron Gant. But Gant broke in on the ball, and it sailed over his head. Guillen came around to score and the game was suddenly in extra innings. After a Dale Sveum double in the 10th, Mark Smith deposited the first pitch he saw over the center field fence to put the Pirates ahead for good. 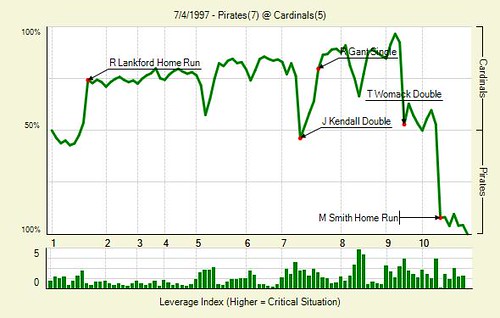 8/25/1997 – Los Angeles Dodgers vs. Pittsburgh Pirates (Game 2)
It had been a demoralizing day at the ballpark to this point. The Pirates played some ugly ball in losing the first game of the doubleheader, and had done very little through 8.5 innings of the nightcap. Trailing 2-0, Eddie Williams led off the bottom of the 9th inning with a walk. Joe Randa stepped to the plate and lined one to deep right-center. Otis Nixon raced to the track and leaped against the wall with his glove outstretched. However, he came up a few inches short, and the ball narrowly cleared the blue outfield wall for a game-tying home run. The crowd, after spending several hours sitting on their hands waiting for something to cheer for, erupted. We had not yet returned to our seats when Mark Smith pulverized Todd Worrell’s first offering into the dark night sky. The towering fly ball touched down in the first row of the left field seats and the game was suddenly over. 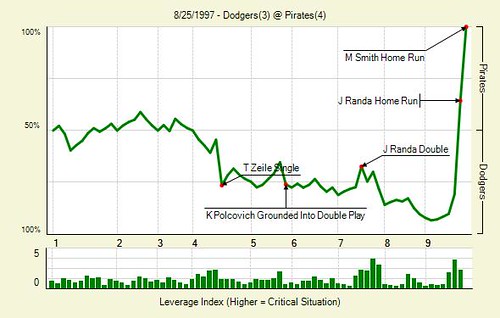 7/28/2001 – Houston Astros vs. Pittsburgh Pirates (Game 1)
This is one of the most memorable games in recent Pirates history. Trailing 8-2 with two outs and the bases empty in the 9th inning, the game was essentially decided. The Pirates literally had a 0% chance of winning, according to Win Expectancy. Kevin Young doubled. Pat Meares homered to cut the lead to 4 runs. Adam Hyzdu singled. Tike Redman walked. Jack Wilson singled, scoring Hyzdu. Billy Wagner came in to shut the door and hit Jason Kendall with a pitch. Suddenly, Brian Giles stepped in, representing the winning run. After taking a ball, Giles jumped on a Wagner fastball and launched a grand slam into the right field seats. Just like that, the Pirates had won. 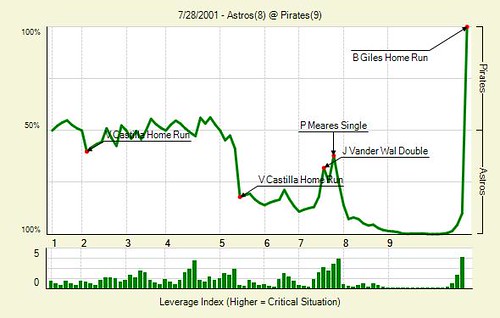 7/8/2005 – New York Mets vs. Pittsburgh Pirates
I will always remember this game for the Tike Redman at-bat in the 9th inning. With the Mets leading 5-1, the Pirates loaded the bases with two outs in the 9th. At this point, Redman stepped in against Braden Looper for an unforgettable matchup. Redman fell behind 0-2, then took two balls to even the count. After six consecutive foul balls, Redman finally put the ball in play. On the 11th pitch of the at-bat, he slapped a single through the infield, scoring two. Matt Lawton stepped in and lined one at left fielder Cliff Floyd. Floyd’s first step was in the wrong direction, and the ball sailed past him to the wall. Wilson and Redman scurried around to score and the game headed to extra innings. With Rob Mackowiak on second base in the 10th, Humberto Cota lashed a single inside the left field line to give the Bucs the improbable victory. 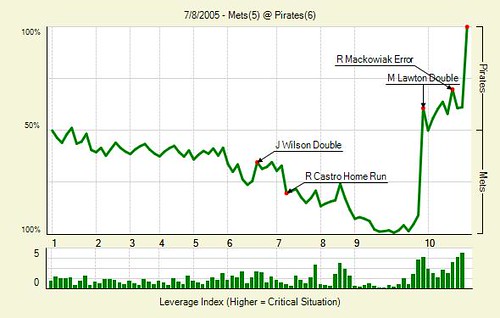