(My sister, a senior at Pitt, spent Wednesday afternoon enjoying the 50-year celebration of Bill Mazeroski’s 1960 World Series winning home run. She graciously agreed to share her thoughts on the event. Ladies and gentleman, it is my proud pleasure to welcome Eve Bandi to Pittsburgh Lumber Co. for her blogging debut. Her contribution is greatly appreciated. – Matt Bandi)

Waking up Wednesday morning, feeling much better after an illness the previous night, I figured my only task for the day would be to complete an optics test that I hadn’t studied for. Sounds exciting, right? I was listening to the radio and they mentioned the 50th anniversary celebration of the 1960 World Series victory. People visit the remaining wall of Forbes Field every October 13th, but there were going to be a lot of people there this year. “I should stop down,” I thought to myself. So on a Wednesday when I didn’t have lab for once, I wandered from the William Pitt Union to the “wall” around 12:30 with a few friends. Walking there, we could see a crowd of people gathered on the corner that was blocked off from traffic. As we got closer, we heard the announcements of 1960 players that were present, including Bill Mazeroski himself, Steve Blass, and others. Cheers followed every name that was announced. We entered the crowd but, being on the shorter side, I could not see anything but the backs of heads. We decided to go sit on a wall that surrounds a Posvar Hall patio. It still wasn’t the best view, but that didn’t matter at all. We could see the large crowd that had gathered 50 years later to commemorate this historic event for so many Pittsburgh Pirates fans. There were old and young filling the corner. There were families and businessmen who stopped by during their lunch. People watched from the balcony of a building across the street from Posvar Hall. They had hung a Pirates banner across the balcony. 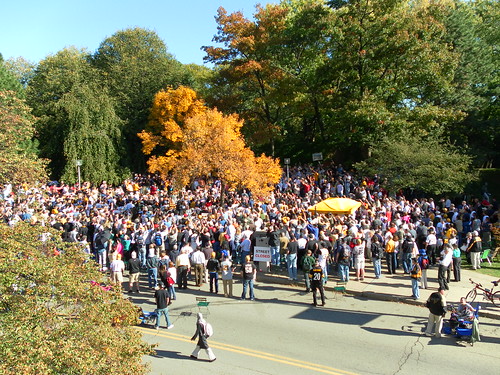 I assumed they would just play the clip of the winning home run, but my expectations were exceeded. They played the entire radio broadcast of the game! It was very exciting to be able to listen to a postseason Pirates game. Sitting on the wall, in the warm sun, on a mid-October day in which I usually have lab, just listening to a baseball game. It was an awesome day. It made me feel almost 100% better. Oh, the power of baseball. At one point, the announcer said, “It’s a nice, sunny day here at Forbes Field.” Sitting in the exact spot where Forbes Field once stood, it felt like we were actually there. That was a really interesting thing to think about while listening to the game. As the game progressed, I looked down to some people sitting on the ground in front of us. They were holding laminated tickets from the 1960 game. It was fun to see those tickets, even if it was from about twenty feet away.

Observing the reactions of the crowd as the Pirates scored each run in a game that occurred fifty years ago was amazing. Everyone was cheering and clapping as the Pirates took a 4-0 lead, as Hal Smith hit a homer in the 8th to regain the lead, and of course when Mazeroski hit his famous walk-off. I knew what was coming when they announced Bill Mazeroski was taking the plate in the bottom of the 9th inning, but that doesn’t mean I was any less excited when the moment arrived. It was very fun to see the large crowd get overjoyed about a game winning walk-off that happened before half of them were born. After snapping a few photos, my friend and I ran inside Posvar to touch home plate. I have walked by the plate numerous times, but this time was a lot more special.

Celebrating a World Series victory is something I have never done in my lifetime. People were taking pictures and videos well after Maz won the game. It was like it had just happened or we were having a parade a week after. Everyone there was still excited about it, including people who were born years after the game. It’s something that all Pirates fans know about, but only fans older than 50 know the actual feeling that a moment like this would bring. I barely remember the ’90-’92 teams, so being able to experience this day was a great way to spend three hours on a Wednesday afternoon.