Despite the age, Moreta has six years of service time remaining, and two options. The Pirates can use him as a depth option in 2022 at the very least. They need relief help, and you’d like to see Moreta produce at this stage in his career — otherwise those years of control and options become somewhat pointless.

Thus far, Moreta has struggled in the majors. Last year, in 38.1 innings, he posted a 5.40 ERA. Those numbers are a bit deceiving, as he struggled to start the season, putting up a 9.88 ERA in his first 13.2 innings. After a trip to the minors, Moreta returned to the Reds and had a 2.92 ERA in 24.2 innings for the remainder of the season.

The Pirates have shown a tendency to buy into small samples of success under Ben Cherington, going with the belief that a player can replicate such numbers. The more I look into Moreta, the more he shows hope that those numbers down the stretch can be replicated.

The key lies in his sinker, and the more I look, the more I’m convinced of one thing: Dauri Moreta doesn’t even have a sinker.

If you go to FanGraphs, you’ll see that Moreta throws only a four-seam fastball. Moreta’s fastball was hit last year for a .948 OPS. His slider had a .464 OPS and his changeup was .694. Clearly, there’s an issue with the fastball.

If you go to Baseball Savant, the Statcast data breaks his fastball up into a four-seam and sinker. The four-seam from Statcast is much better, with a .190 average against and a .333 slugging. By comparison, the sinker has a .378 average against, and an .865 slugging.

That sinker looks like a bad pitch, by the numbers. I’m just not sure that it’s a different pitch.

The four-seam registers with 11.9 inches of vertical drop, which is 2.0 inches above the average for a four-seam fastball. There is also 8.2 inches of horizontal break, which is right around average. Moreta’s four seam has above-average sink, which can lead to a really good sinker.

The sinker, however, doesn’t look like a sinker. It has just slightly more vertical drop than the four-seam, at 12.7 inches. However, that ranks 7.7 inches lower than the average sinker. There is more horizontal movement with the sinker, at 11.9 inches. That’s also unlike a sinker.

Those pitches both average around 96 MPH. They have the same movement, which a four-seam and sinker shouldn’t have. Moreta also uses the pitches in the same part of the zone.

If you have a four-seam and sinker, you would use the sinker down in the zone and the four seam up in the zone. Moreta is using both pitches high in the zone, which is a bad approach for a sinker.

I’ve seen this happen in the past with Statcast and young MLB pitchers. Statcast misidentifies a pitch from a young player who has an unusual pitch. In this case, Moreta’s four seam has sink. The sinker appears to me as bad four seam fastballs that essentially looked like steamroller sinkers.

The overall approach for Moreta seems to be using the fastball up in the zone, and working the slider and changeup low to either side of the plate. I think that his slider would benefit from a true sinker at the bottom of the zone. I just don’t think he’s throwing a true sinker.

I could be wrong on this. So, I checked with someone who would know better than me.

Doug Gray runs RedLeg Nation and RedsMinorLeagues.com. He runs what is essentially the Cincinnati Reds counterpart to this site, while also writing for Baseball America as the Reds correspondent. I’ve had a chance to talk with Doug for many years as we’ve shared tips and experiences running independent prospect sites. With the Reds and Pirates in the same division, we don’t get many chances to break down trades.

I asked Doug if Moreta was throwing a sinker, but he didn’t recall the pitch. Doug was the one who pointed out Moreta’s success from June until the end of the season. He sent over a full report on Moreta, to give you an idea of what the Pirates are getting from the Reds perspective:

Doug Gray Scouting Report: “Let’s start with some recent background — in 2019 Moreta was throwing 93-95 MPH with his fastball while mixing in the slider and changeup. For a reliever, the pitch distribution was pretty good. In 2021 things changed a bit. He began to show more velocity, sitting 95-97 and touching 99. For the first time I began to hear scouts talk about how tough his fastball was to pick up out of his hand, with some referring to it as an “invisiball”. What was interesting about 2021, too, was that he began to throw his fastball far more frequently than he had in the past. That carried over into 2022, but as the season went along he was less fastball heavy, though he still threw a lot of fastballs by 2022 standards. I’ve always liked his slider and felt he should throw it more often. It will be interesting to see if the Pirates change his pitch usage.”

In talking with Doug, it seemed that Moreta was sent down to work on some stuff. Based on the numbers, he may have worked on the fastball. Brooks Baseball shows a massive drop in isolated power against the four-seam after the first two months of the season, with the disclaimer that he pitched once in August. 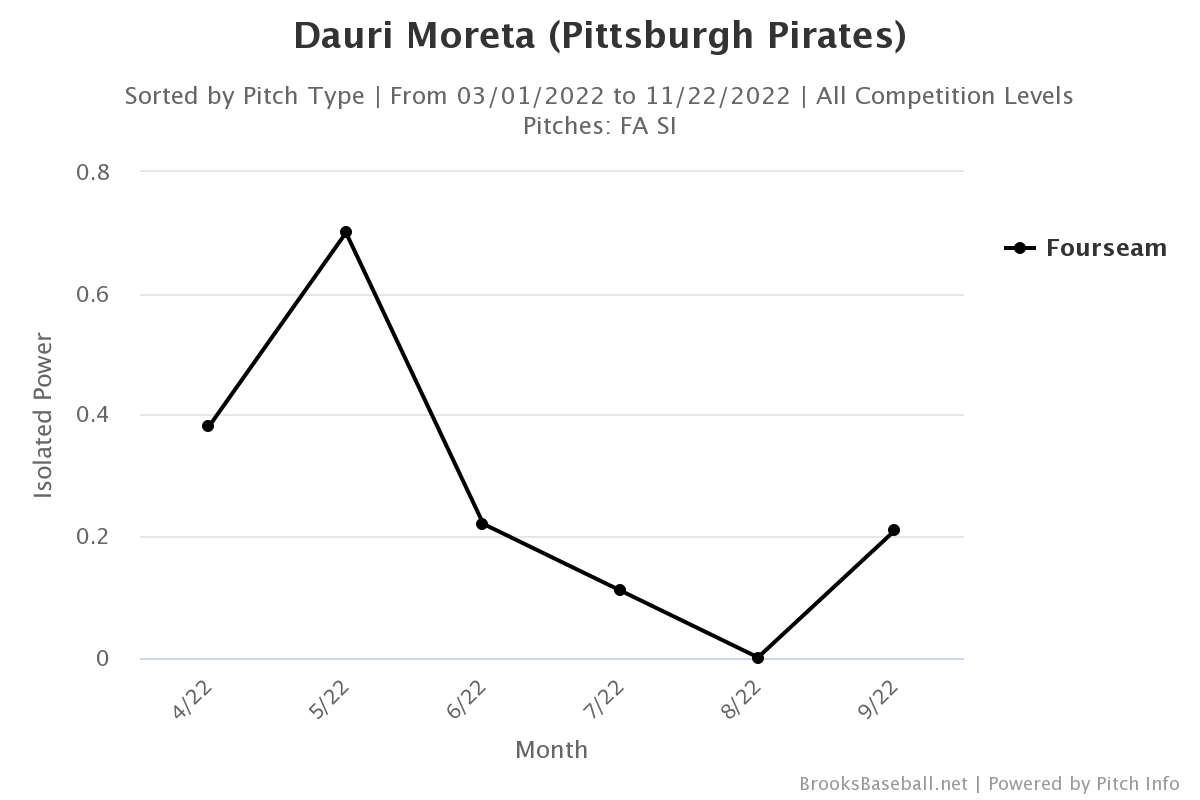 The worst thing about Moreta seems to be his inflated ERA, and his mysterious sinker that gets crushed. I feel like that might just be a bad four-seam fastball, and it’s possible that the Reds already sorted this out.

What Can Dauri Moreta Become?

I’m inclined to think that Moreta throws three pitches: A four-seam that he works up in the zone, a slider that is a plus pitch low, and a changeup that works low to the opposite side. My belief is that the sinker was just a misclassification of bad four-seam fastballs.

This isn’t exactly encouraging news. There’s not a big enough sample size for us to say this problem is in the past. Four seam or sinker, Moreta has shown inconsistency with his fastball. The fact that he was trending up after a trip to the minors is a positive.

I do think that Moreta would benefit from a true sinker. Typically, pitchers with natural sink to their four-seam can develop dangerous sinkers with a lot of movement. If he can learn that pitch, and maintain the mid-90s velocity, then Moreta could develop into a leverage reliever. This isn’t as easy as I’m describing it.

For now, I’m interested in the turnaround Moreta made last summer, and the possibility that his struggles were due to a bad pitch. The Pirates should focus on the fastball, and I don’t think they have to adjust much to get a quality MLB reliever out of Moreta — as he gave a preview of in the second half last year.

Braxton Ashcraft Looking To Make Up For...

Roansy Contreras: What Analytics Said About His...

Just what the doctor ordered on my trip to a little village on the Pacific Coast of Mexico… looking to find some winter league games nearby. Will advise.

Fascinating story, Tim. I agree with the respondents here and enjoy their input almost as much as your own ingenuous story!

Further. I want to donate on a monthly level, but last I looked it was all one time donations. Can you put up a monthly thing so I can automatically shoot you some $ the way NPR does its “sustaining members”? Would love and appreciate that so I can donate once and in perpetuity.

“Now just a minute, Doc. Just what kinda tracks was you followin?”
“Uhhhhh… train tracks.”
“Therefore, you must be tryin’ to catch a train.”
“Uhhhhh… that makes sense.”
“It went dat-a-way, Doc.”

The Reds haven’t exactly been a powerhouse when it comes to pitcher development. Maybe they are the right place to pillage?

And this article is why I love this site. Awesome reports Tim and thank you!
Ps Happy Thanksgiving!

I understand that the trade of Newman for Morteas was basically a salary dump by the Pirates with the hope that the player gotten in return will prove to be more than just another body. Most times when a proven major league player is traded for a prospect the team getting the MLB player is the winner. At least the trade will provide opportunity for other players such as Bae, Castro, and Tupac.

I see this as a play for a big upside reliever if we can work it out. Whether he adopts a real sinker full time or we work to eliminated the mechanical flaw that give him such inconsistency, this guy clearly has a lot going for him.

At the very least, I think he could be an Underwood level reliever. Someone who can be reliable in the middle innings, enough that you’d keep him for an arbitration year.

this was great, Tim.

my first question is… do we have the tools to see if most of the “sinkers” that statcast picked up occurred in April-May?

if it was picking up “sinkers” then, but not from June-Oct, that’d certainly point toward an adjustment having been made.

ugg, i’m only seeing it possible to sort pitch type by year, and not month. still digging.

i sorted by month. there’s no real pattern. ugh.

he only had one outing in august. we can ignore the august data.

So the analysis really comes down to April/May vs June/July. 15 outings vs 15 outings. Terrible outings vs good outings.

what doesnt make any sense…. is that…. the “sinker” which is his worst pitch by statcast (and doesnt really exist), peaked in the months where he did his best pitching.

I really think those are just his bad fastballs that got hit all year. I don’t think he ever got rid of the “sinker” and I don’t think you can simply bank on the second half numbers repeating with no adjustments. He seems like he could use a fastball overhaul.

This was good info. Thanks for looking it up.