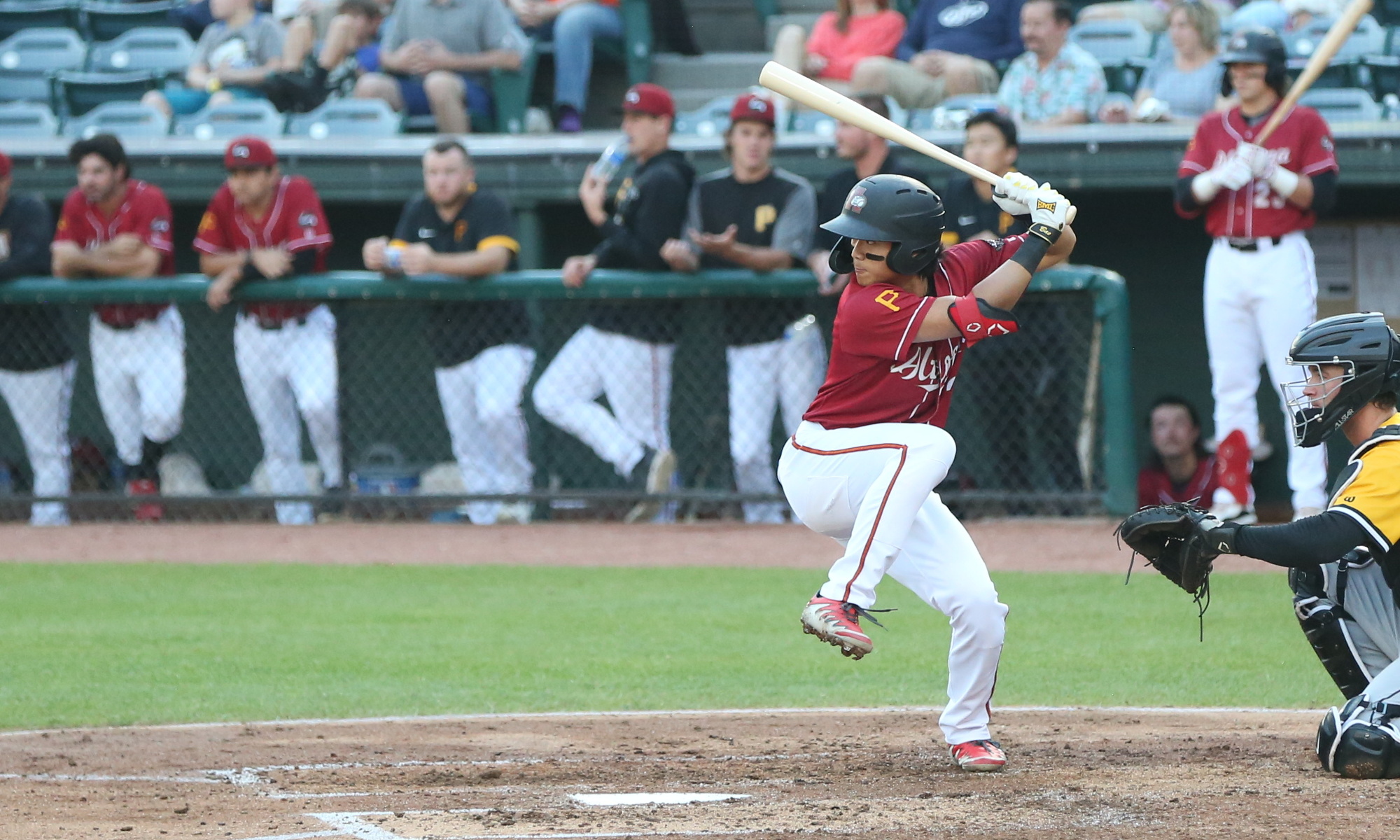 At this point in the rebuild, it’s hard to argue that General Manager Ben Cherington hasn’t done a great job in buffing up the system and added plenty of prospect depth in the organization.

No matter which outlet you go to, the Pittsburgh Pirates have one of the top-rated farm systems in baseball, and most of that has to do with the work Cherington has done.

A side effect of doing so, however, is that playing time is starting to get harder to find, where a lot of players are going to be in a situation where they are competing for playing time. The top guys will get their looks, but after that there will be a lot fighting for position.

One player that the Pirates may have a hard time finding a spot for will be Ji-Hwan Bae. After spending the 2021 season with the Altoona Curve, the next logical step would be to take his talents to Triple-A Indianapolis.

Simple enough talking about it, but looking at how potentially the roster may shake out; it could end up being a lot more difficult that originally thought.

The main issue will be that despite adding to his positional flexibility late last season and during the Arizona Fall League, the two positions that Bae would play have no shortage of options at the upper levels.

Bae played second base for the majority of the 2021 season, a year that finally saw him develop a little bit of power that his game had sorely been missing. Prior to this year, Bae had yet to hit a home run in professional ball but in 2021 he combined to hit eight between the Florida Complex League and Altoona.

While playing for the Curve, Bae finished with a .772 OPS with seven home runs and 20 stolen bases. He collected 89 total hits in 83 Double-A games.

Offensively, Bae still profiles as a player who could hit at the top of the order, but defensively there are still questions.

Along with second base, Bae got his feet wet in center field late last year and continued that in the AFL. He plus speed, centerfield is a position that would most allow him to utilize his best skill set.

The only issue with that the position is well spoken for at the upper levels. Although we are still at least a year away from likely seeing Bae push for a spot in the majors, Bryan Reynolds is manning center field, and it doesn’t look like he’s going to relinquish that position any time soon.

2018 first round pick Travis Swaggerty had a little bit of a setback and isn’t throwing right now, but when healthy he’s figured to be the guy at Indy. Depending on how long the injury lingers, this could be Bae’s best opportunity to jump out the gate and get playing time on the field.

Including Swaggerty, the Pirates have eight outfielders on the 40-man roster and those who don’t make the major league roster will trickle down to Indianapolis first.

Non-40-man roster players like Bligh Madris and Cal Mitchell are still in camp with the Pirates right now and are expected to push for time in Indianapolis and have more experience in the outfield than Bae.

When it comes to the projected Altoona roster, 2021 breakout prospect Matt Fraizer is probably in line to start in centerfield again and could be one of the first call ups to Triple-A should a spot open.

Even if you shift Fraizer to the corner, Connor Scott, Lolo Sanchez, Blake Sabol and Matt Gorski are some names that could be in the outfield picture in Altoona. Not to mention if a name from the Triple-A mix gets shuttled down a level due to a lack of space.

The picture at second base is just as cloudy, also due to the sheer number of options the Pirates have there. Diego Castillo, Rodolfo Castro, and Tucupita Marcano all spent time in either the majors or Triple-A last year with also Hoy Park needing a spot if he doesn’t break camp with the team.

The second base position at Altoona is spoken for with 2020 first round pick Nick Gonzales expected to man the position.

Bae comes with his own set of baggage, but on the field his offensive skill set is intriguing as a potential leadoff hitter. He didn’t have a traditional position before hand, but the ones he has played he doesn’t seem near the top of the pecking order.

As the depth continues to grow, and the developmental stages continue, players are going to have to compete even harder for playing time. The DH getting instituted league wide ensures more players will be able to get at-bats but will only go so far if players can’t get on the field.

Bae may be the most unconventional candidate for the designated hitter position, especially because that limits the use of his speed. It has always been his hitting though that has carried him through the system, with Bae winning the South Atlantic League batting title in 2019 with Greensboro.

It’s a good problem for the Pirates to have, just not a necessarily ideal one for the players, even if the competition brings out the best in everyone.

For Bae, finding a little more comfort at an additional position would go a long way in helping him see the field more.

J.C. Flowers Adjusting to the Role of a Starting Pitcher

So either Endy doesn't have a hip issue or he's…