Card of the Day: 1969 Topps Al Oliver and Richie Hebner 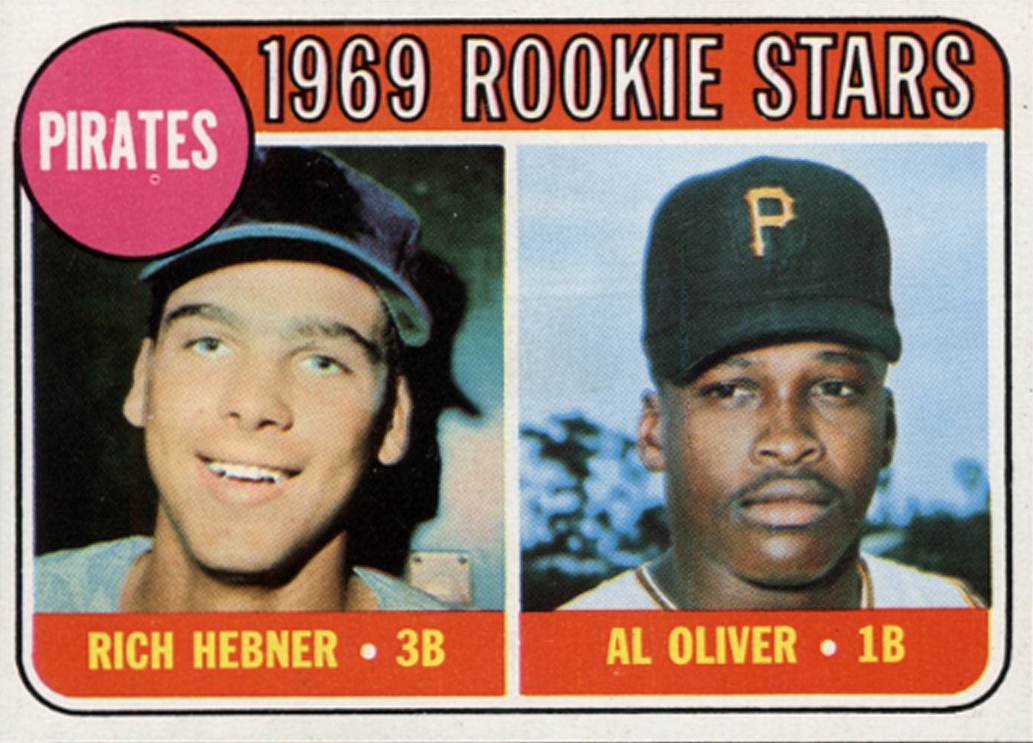 Today’s Card of the Day shows off some solid prospecting by the people at Topps. In the 1969 set, they picked two rookies from the Pittsburgh Pirates who combined for 36 seasons in the majors and over 4,400 hits and put them on the same card. Today’s card is the 1969 Topps Pirates Rookie Stars, featuring third baseman Richie Hebner and outfielder Al Oliver. There’s one thing you may or may not have notice right away, but when you see it, you’ll always notice it. Topps did a lot of airbrushing back in the day when they didn’t have pictures of players with their current team. Hebner’s photo likely shows him with a minor league team, but Topps didn’t have the right to use their logo. If you look at his hat, you’ll see the awful airbrush job that looks like a little kid took a black marker to the card after he got it in a pack. Oliver is shown in a Pirates uniform, likely from Spring Training in 1968.

Hebner played two games and got one at-bat for the 1968 Pirates. His big league debut was an odd one. Manny Jimenez pinch-hit for pitcher Al McBean and got to two strikes before he was removed in favor of Hebner. The first pitch Hebner saw was a pitch out and Freddie Patek was caught stealing to end the inning. That was it for the day for Hebner. Five days later he got his chance to swing the bat and he flew out to left field against Hall of Famer Fergie Jenkins. In Triple-A that year, the 20-year-old Hebner hit .276/.337/.402 in 104 games. It’s interesting to note that Hebner’s stats quoted are from his first two partial seasons and not the much lower average in Triple-A over the past year. Oliver’s brief report notes his 1968 stats. His actual stat line has an error. He’s listed with 17 doubles during his minor league career, but he actually had 71 at that point. Anyone who saw Oliver play would have a hard time believing that he had just 17 doubles in 450 games. Between the majors and minors, he collected exactly 600 career doubles.

Perhaps the most interesting part about this combo is the fact that Topps issued three Rookies Stars cards for the Pirates in 1969. I’m sure I’ll feature the other two here some time in the future, but the short story is that they ended up putting the two best players together, the two second best players on another card and the two worst players of the group on the third card.

The middle group features Bob Robertson, who had a solid/short career, along with Bruce Dal Canton, who played 11 years in the majors. Not quite in the company of the Hebner/Oliver combo, but still a nice pair of picks.

The third card has Jim Shellenback and Elvio Jimenez. Shellenback pitched parts of nine seasons in the majors, including 1966-67 with the Pirates. Not the worst pick, but not a star. Jimenez was just an odd pick, as a 28-year-old at the time, who played one big league game, coming in 1964 for the Yankees. Topps had already used Jimenez on a rookie card with the Yankees in 1965, so they doubled down on a one-game wonder. Remember the Manny Jimenez in mentioned above in the recap of Hebner’s first game? Elvio is Manny’s younger brother.

P2Daily: Looking At A Realistic Timeline for Henry Davis

Pirates Discussion: Trip to the Capitol

Bryse pitched 5 innings yesterday for Indy, so not him.…

The Pittsburgh Pirates and Chicago Cubs have put up a ...
149

I'm not sure where the Pittsburgh Pirates get the audacity. ...
126

Well, at least his tier of reliever has that kind…

Looks like bednar wasnt available tonight, those 8 out saves…

The only fane the league care about go by the…

No, is nothing, looks like a name got shortened, perhaps…

I'd like to think the league cared enough about baseball…