Barnett: How Felipe Rivero Turned Into One of MLB’s Best Relievers

While the Pirates have had their own share of bullpen issues this year, arguably, no team in the National League has had a worse performance from their bullpen than the Washington Nationals, whose relievers have registered a wretched 5.36 ERA over 127 innings of action.  It’s the very reason commentators couldn’t help but mention during last week’s Pirates and Nationals’ series that Washington probably wishes they hadn’t parted ways with Felipe Rivero at the deadline; yet, even they couldn’t have predicted how dominant Rivero would be this season.

As you may already know, prospect pundits weren’t particularly high on Rivero, expecting him to be a back of the rotation starter or maybe a solid reliever if he could put it all together. If you get click on his Fangraphs page, you’re still greeted with this unremarkable set of tool grades for him:

At the sight of that and the lukewarm reviews, it’s no wonder much of the Pirates fandom were disappointed by his and Taylor Hearn’s inclusion in the trade for Melancon when other relievers were fetching top 50 prospects and more.

Well, I’m not hearing a lot of complaints these days, and rightfully so, because Rivero has dominated the competition to the tune of a 0.79 ERA and a .216 wOBA.  We know that Rivero’s changeup, an obvious omission from the aforementioned scouting grades, helped thrust him into this position, but his overall numbers last season were unspectacular despite possessing one of the most devastating pitches in baseball. Thus, I want to delve deeper into a couple of adjustments that Rivero made over the last calendar year to transform him into the envy of many teams, including the two teams that deal him (Washington and Tampa Bay).

Throughout his minor league career, Rivero  exhibited neither a strong platoon split or reverse platoon split, nor did he to do so during his initial stop in the majors; however, one of the reasons the Nationals grew weary of his development, among several things, was that he was getting lit up by southpaws last year.

The pitch that was noticeably being feasted on was the four-seam fastball even though it brought both heavy heat and solid movement to the table. Perhaps, his lack of confidence throwing the changeup against lefties hindered his fastball’s performance since the two obviously play off one another, so instead, he was relying solely on velocity and location, which just weren’t enough to keep hitters off-balance given the differential in release point between his four-seamer and his breaking ball, which is depicted below in the chart from Brooks Baseball: 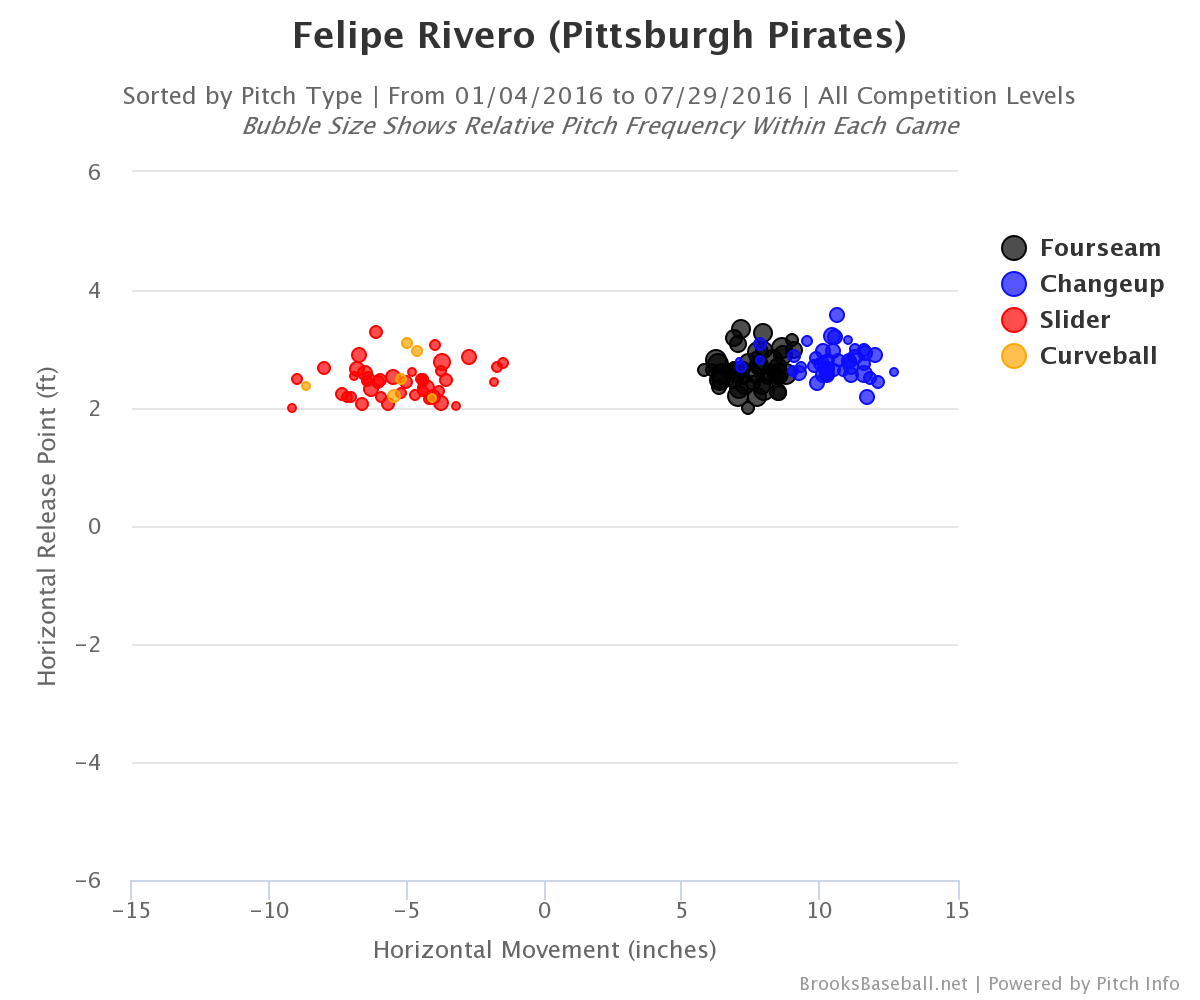 Jeff Sullivan of Fangraphs wrote a piece this offseason suggesting that Rivero could be the “star of the Pirates’ bullpen,” an unsurprising observation for those regularly watching the Pirates.  Nevertheless, I mention the article because one of the more interesting tidbits was some commentary on some mechanical cleanup that Rivero made just before the trade.

If you don’t feel like reading the article, take a look at Rivero’s follow-through in the top two images compared to the bottom two images. 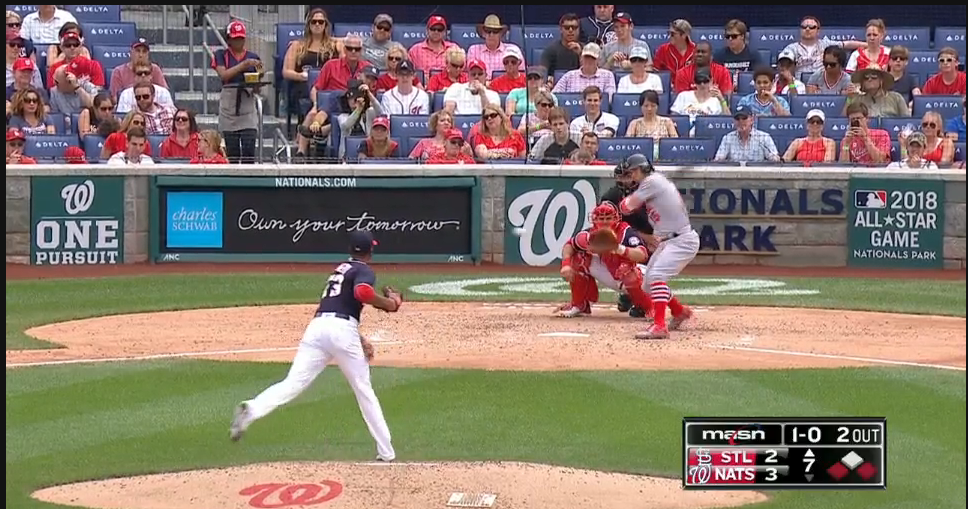 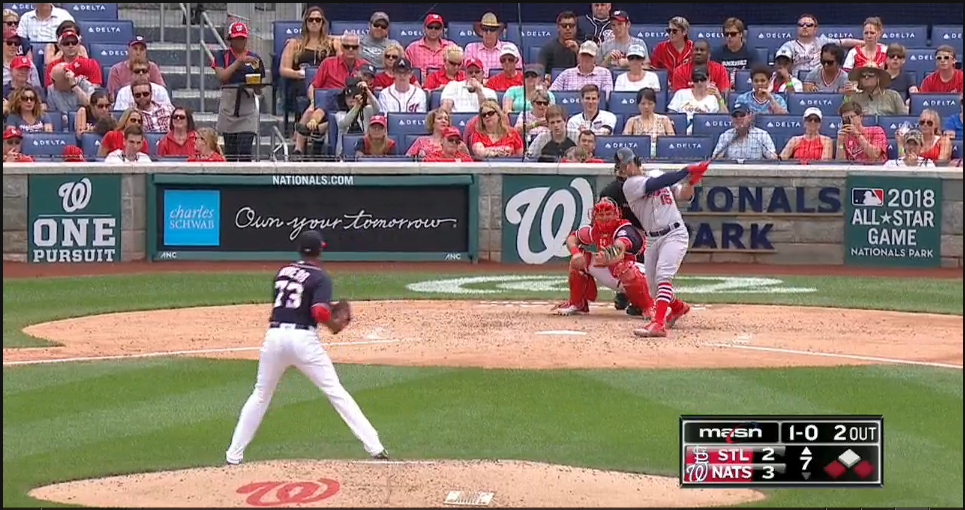 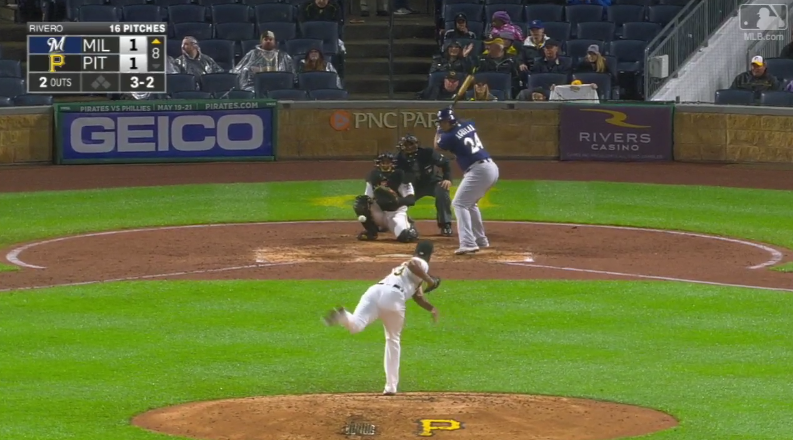 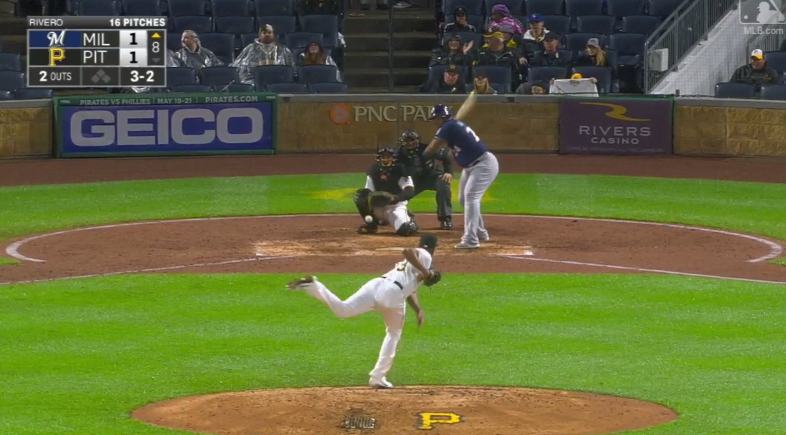 In the top two, the momentum from his throw carries him towards first base during his follow-through, but in the bottom images, his momentum is carrying him a bit the opposite way in a more balanced delivery as he polished things up and began keeping his front leg in a more vertical position after he plants it.  (He often even moves towards home on this follow-through rather than third.)

Now, the thing Sullivan doesn’t note is that this mechanical change eventually resulted in a shift in movement on his four-seamer. While it maintained similar vertical movement, it possessed roughly two inches less arm-side run on average.  Off that pitch, opposing hitters have produced a paltry .281 slugging percentage and whiffed four percent more per swing.

Of course, the various pitches in a player’s arsenal play off one another, so it’s important to note that this was not the lone change to Rivero’s attack against southpaws.  He also brought back the “curveball.”  He didn’t throw it a ton (just 5.38 percent); yet, the incredible things about the curveball, which isn’t even classified as such by Fangraphs, is that is nearly identical to his slider in release point and horizontal movement, but it breaks down sharply, giving it five inches more of vertical movement.

The uptick in use or variance for his breaking ball (if you prefer to characterize his curveball as a slider as some sites do) has boosted his slider’s performance, limiting opposing batters to a single base hit on the pitch since donning a Pittsburgh uniform.

Maybe one day, he’ll gain confidence to the throw the changeup more against southpaws given how devastating a pitch it is, but he’s been more than successful enough with his current approach, showing little reason for doubt among his peripherals.

Unintended Consequences and an Adjustment

What seems to be a repercussion of the mechanical change and less movement on his four-seamer is that despite the efficacy of the pitch against lefties, right-handers, who had previously been held to a sub .400 slugging percentage by Rivero, were now crushing the four-seamer, leading to mix results to finish out the season.

To try and compensate, Rivero spent a significant amount of the time trying to paint the corners, and he wound up a slightly unlucky as six percent of pitches thrown in the zone were called balls.  This strategy and run of bad luck sent his walk rate against righties soaring from 6.9 percent as a National to over 16 percent.

It’s been a totally different story for Rivero this year, hammering the zone with authority; although, he’s been able to do so because he’s began using the changeup against right-handers almost 40 percent of the time. Apparently, this has baffled hitters again and again because they don’t know if the high 90’s fastball or wicked changeup is coming.

Since opposing batters are seeing it more frequently, the changeup is understandably getting less whiffs, but the groundball rate is up over 70 percent and production as a whole is down against the stingy reliever.

Yesterday, Tim spent some time exploring when Pirates typically trade their players, walking the fine line of maximizing value and remaining competitive in a small market sort of way. The Pirates hung onto Melancon until they couldn’t/didn’t need to any longer and found a potential long-term replacement.

At the time, it was hard to see past the Yankees nabbing Gleyber Torres and Clint Frazier, but that certainly isn’t the case anymore as Rivero is earning a place among the upper echelon of relievers in the game. He simply needed a little more time to develop, and now, the Pirates will reap the benefits of his growth for years to come as remains under team control through 2021.