Inspired last week by a Jeff Sullivan article at FanGraphs, I decided to take a look at how well the Pirates have been performing this year when deciding to swing at the first pitch.

As you already know if you stopped to read Sullivan’s piece, batters across MLB are not only swinging more in 0-0 counts over the last few years, but they’re also finding better results.

In addition to their 4.5% increase in swing rate on the first pitch, the Pirates as a team are no exception to the overall increase in production recently among hitters: 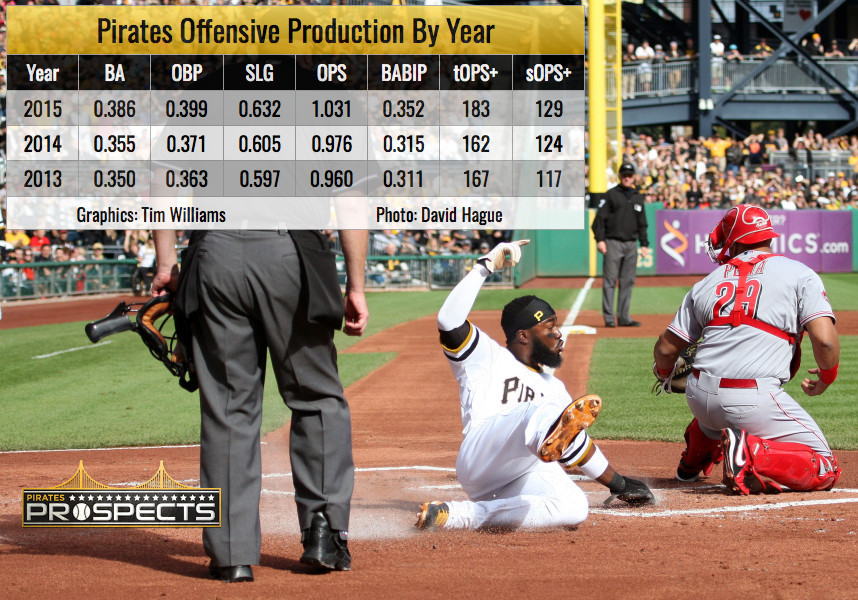 Marte’s walk-off home run was not the only example from Friday night of the Pirates being aggressive in 0-0 counts and finding success. Both Andrew McCutchen’s home run in the fourth and Jordy Mercer’s game-tying single in the sixth came on the first pitch of their respective plate appearances.

Saturday and Sunday’s games, however, shows the other side of that coin. Each of the regulars — Marte and Polanco in particular — offered at the opening pitch at least once, but none of their attempts produced a hit, and only a few of those attempts produced a ball in play.

But whether it leads to success or failure, Pirates hitters have continued attacking 0-0 pitches with authority this season. Consider their final 2015 statistics: 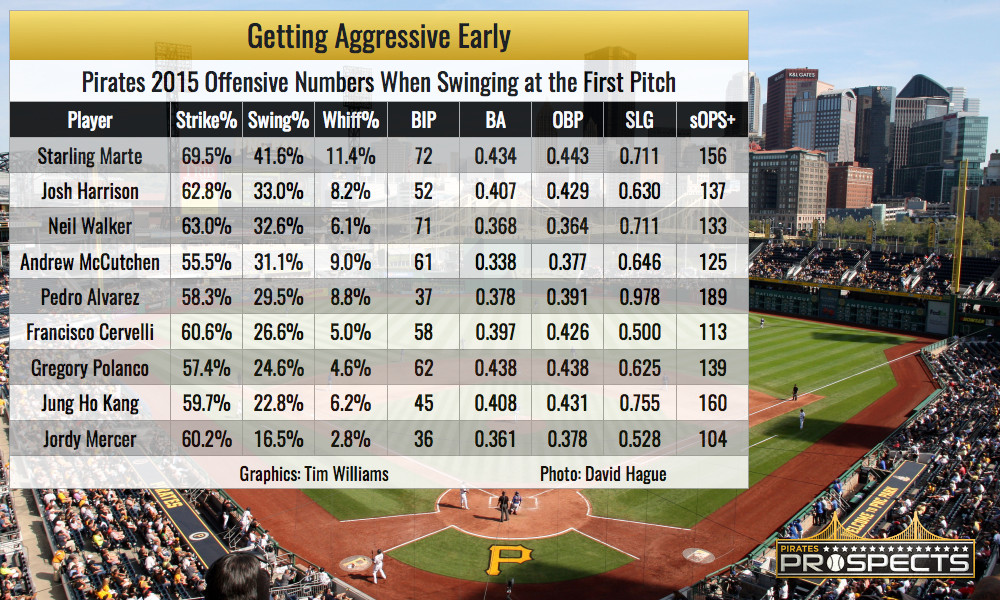 The numbers effectively demonstrate that Marte is indeed the most aggressive on the first pitch among Pirates regulars. The next five (Harrison, Walker, McCutchen, Alvarez, and Cervelli) are clustered somewhat closely together, with the most abstinent hitters (Polanco, Kang, and Mercer) at the bottom.

Unsurprisingly, those who swing less often generally also end up missing less often, and are putting the ball in play less often. Fortunately, that greater selectivity hasn’t resulted in a sacrifice of production.

Generally speaking, hitters have better numbers on the first pitch than they do overall. Intuitively, this makes sense: since the first pitch is more often a strike than not, hitters often find themselves behind in the count, or an even count with at least one strike, which can easily lead to more negative outcomes like striking out or swinging at a less than optimal pitch. So we could expect Pirates hitters to have strong numbers in 0-0 counts.

But even when compared to other NL hitters, their numbers still look strong. Looking at the sOPS+ column, you’ll see that each of the regular hitters is performing above the National League average on the first pitch, and all but Cervelli and Mercer — generally bottom of the order hitters — are at least 25% better.

It’s also worth mentioning that the group above has hit a total of 31 home runs on 0-0 pitches, including the two on Friday night. Alvarez in particular has found power early; he’s hit nearly a third of his home runs (8 of 27) on the first pitch.

Frustrating as it may be to see a player put a ball in play on the first pitch and make an out, any perspective on the numbers shows the Pirates are doing well when they put the ball in play in 0-0 counts.

There is an obvious strategic incentive to offering at the first pitch: if you always take it, pitchers will be happy to hand you an 0-1 count as often as possible. So, regularly swinging at quality 0-0 pitches forces pitchers to execute well in order to get that first strike.

The first pitch is also often likely to be a fastball, which can take different forms, but is still the most familiar of pitches to a hitter. Over the last three years, Pirates position players have been by far the best in the NL against the fastball, so it’s important that they capitalize on opportunities to hit one.

Of course, there are downsides to this approach. Swinging at the first pitch can yield a strike via a foul ball or a whiff. It can also lead to an out on a ball in play, taking away the possibility of reaching base by other means like a walk or hit by pitch.

Balancing the need for patience and driving up the starter’s pitch count against the need to capitalize on quality pitches to hit is perhaps an eternal struggle for hitters.

On the pitching side, the Pirates preach getting action within three pitches, so it’s probably counterintuitive that playing into that strategy by offering at the first pitch can be advantageous while the Pirates are at the plate.

With an ever-increasing number of strikeouts driving down offense and balls in play, however, hitters would seem to have an incentive to be more aggressive. If there is a happy medium to be struck, though, it seems that the Pirates might be finding it, at least over the last three years.

The Pirates have said at various times that a player’s approach at the plate should be to look for the pitches he hits well, and put a good swing on them. For Marte in particular, but for others as well, they have found a good number of those opportunities at the outset of a plate appearance.

The results for the Pirates when attacking the first pitch speak for themselves. We’ll have to monitor next season whether opposing pitchers begin to adjust their approach in response to this aggressiveness.