A.J. Burnett: Anatomy of a One-Hitter

So many events have to go right for a no-hitter to happen. We sometimes lose sight of that, living in this Golden Age of 23 no-hitters in the last six years. Even with no-hitters becoming almost as common an occurrence as Clint Barmes home runs, they still require a potent combination of talent and good fortune to come true (you know, like a Clint Barmes home run).

When looking at A.J. Burnett taking a perfect game into the 6th inning and a no-hitter into the 7th inning of Wednesday night’s win over the St. Louis Cardinals, it is important to look at both skill and luck.

Burnett generated nine swings-and-misses on Cardinals hitters, which actually is about average for the veteran pitcher in any particular start. Thing is, Burnett’s “average” is quite good for getting batters to whiff. His swinging-strike rate since the start of 2011 is better than that of aces like Felix Hernandez and Gio Gonzalez.

Attacking indeed, as Burnett threw first-pitch strikes on 14 of the 23 hitters he faced. Perhaps the most impressive sequence was Burnett getting slugger Matt Holliday to swing and miss at two curveballs, including this one to retire him at the end of Burnett’s 4th inning on his way to eight strikeouts.

Eight of Burnett’s 10 swings-and-misses were generated by his curve, with two coming on his four-seam fastball (which touched 94 mph early on). Those two pitches, with a few sinkers tossed in, were all Burnett needed to stymie the Cards’ offense. That’s right, stymie.

But do not forget the talent of Russell Martin behind the plate. He called a game that included seven ground-ball outs, but one pitch in particular stands out. In the top of the second, Carlos Beltran worked the count to 2-2, but was struck out looking on this sinker.

That was a nice frame by Martin to get the strike-three call from home plate umpire Adrian Johnson. Look at where the ball was when it crossed the plate. 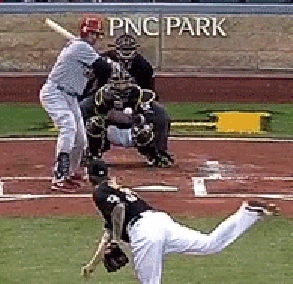 I don’t want to gush, because you will see Martin frame far better pitches than this over the season, but his ability to consistently draw strike calls on close pitches like the one above will help Burnett, who had trouble with walks in his last couple years with the Yankees.

Second baseman Neil Walker made a smooth play in the 4th inning to rob Matt Carpenter of a hit, but many of the other balls in play were hit toward Pirates fielders. Burnett mostly limited the balls hit to the outfield, but a pair of line drives later in the start were directed right at Travis Snider, which is the kind of good luck a pitcher relies on to twirl a gem.

Right before Beltran got the Cardinals’ first hit with two outs in the 7th, Burnett made a fine play on a dribbler off the bat of Holliday, making a throw to first that just barely beat him. 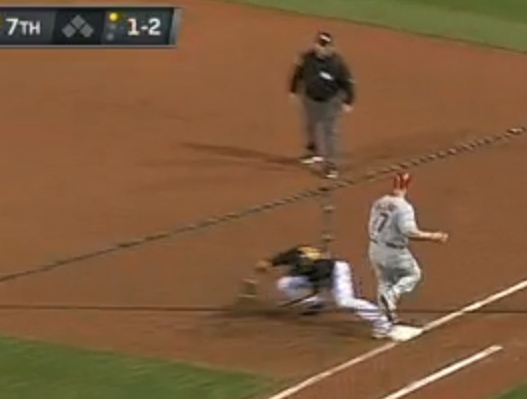 In a combination of good pitching and good luck (that the Cardinals were not swinging at them), Burnett threw 20 called strikes that got him ahead in counts.

“I had a good hook today and threw some balls in I don’t normally throw in and it caught them off guard,” Burnett said.

Unfortunately for Burnett, good fortune can only get you so far, and his velocity was dropping as he approached the 100-pitch mark. It would have taken some more luck  to seal the deal, even if he had retired Beltran.

Ultimately, it wasn’t to be for Burnett on Wednesday night. Instead, it became the seventh game in his career that he pitched 6+ innings of one-hit baseball. Maybe the no-hit bid was broken because the Cardinals were stealing signs. It looked like Burnett was calling out one of the hitters for just that.

Burnett already has his no-hitter safely in hand, getting it on May 12, 2001 in San Diego, despite nine walks. After this one and his near-no-hitter at Wrigley Field last year, it’s not difficult to see Burnett orchestrating another attempt at a perfect game.

Everything just has to come together. For now, Pirates fans can just enjoy Burnett making the Cardinals look like a far lesser team.

Not perfect, but still beautiful.