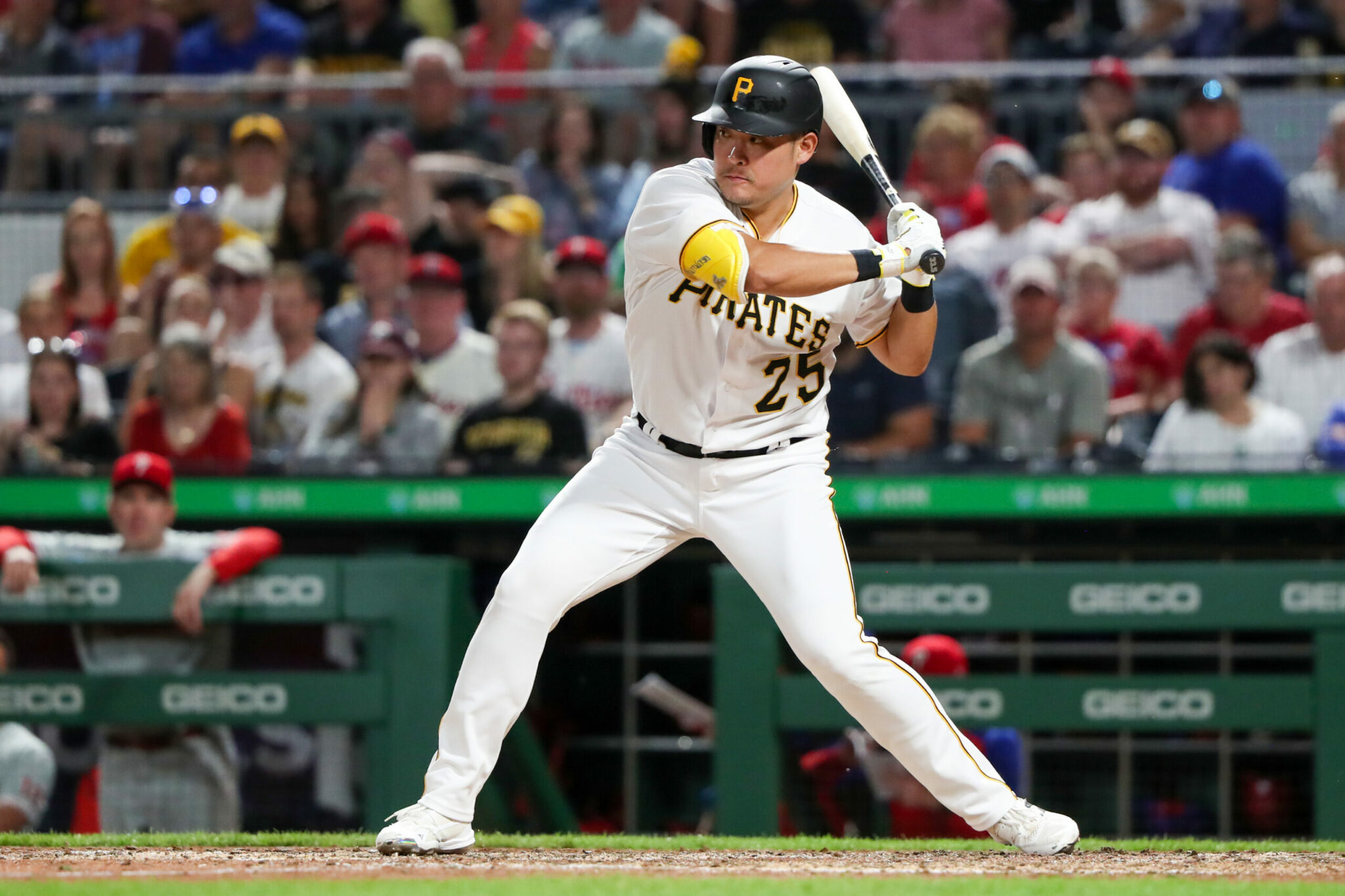 According to Jason Mackey and confirmed by other sources, the Pittsburgh Pirates have designated first baseman Yoshi Tsutsugo for assignment. His place on the 26-man roster will be taken by Tucupita Marcano.

Tsutsugo has struggled through three seasons in the majors with three teams. He got off to a nice start after he joined the Pirates late last year, then quickly slowed down. This year has been poor since the start of the season, hitting .171/.249/.229 in 50 games, with a -1.7 WAR to his credit.

The 22-year-old Marcano has been up with the Pirates a few times this year, but he’s likely to get a longer look this time. He has hit .229/.280/.357 in 22 games in his previous stints with the Pirates. With Indianapolis this past month, he put up a .933 OPS in 14 games. He has played shortstop, second base, third base and left field this season.

Yes Walkie, that was a mistake by Hayes……really baserunning 101.

Remember when they were trying to sign him to multi year deal? Thank God he turned that down

August 3……..Happy Day! Just checking P2 and learned the good news about Yoshi.
And even better with Marcano returning! This is far better news than the trade deadline deals.

IMO, the promotion of Marcano, at this time, has hair all over it! I cannot feel confident about Marcano at 2B, and cannot understand how he can pass over Ji-Hwan Bae, and others. Way too much talent in the Pirate org at 2B, especially Bae, Rodolfo Castro, Peguero, and Castillo.

IMO, Marcano and Bae are damn near identical players at this point. Lefty hitters with great bat to ball skills, little power, and great speed. Can play all around the diamond but profile best at 2B. Are basically the same age (Tucu is 2 months younger), and have been raking at AAA. Their tools/projectability align almost 1/1. The only real difference is Marcano is currently on the 40 man and not injured. Not sure at all why people are clamoring for Bae but ignoring Tucu. (Not to mention that Bae doesn’t exactly have a great track record of being a good human being).

As far as the glutton of 2B talent I agree heavily, which is why I’d get creative and try and deal 1 or 2 of them away this offseason to fill other needs.

Bae is injured, but if/when he’s healthy there’s an open spot on the 40-man and several dudes just taking up space, so nothing would stop him from being added to the 40 and 26-man rosters.

Peguero has done nothing over the last 2 months to warrant a 2-level promotion. Unless he starts catching fire, I’m fine keeping him at Altoona with maybe a September promote to Indy since the AAA season is longer.

Castillo has been given plenty of reps – I think they know what he can do and what he needs to work on. He should certainly be carried over the winter, or flipped for a similar 40+ FV type player at a position of greater need. I have to believe he’ll be back when rosters expand back to 28 September 1 if not sooner.

So really this was a question of whether Marcano or Castro should be recalled. I’m 50/50 on that – probably would have preferred to see Castro get some extended time particularly as he’s been playing better on both sides of the ball lately (or so this site has told me). But I can’t argue too strenuously for either side, I’m curious about both.

It’s the outfield I’m more up in arms about. The downstream effect of not trading Gamel is you have one less lineup spot to audition the likes of Allen, Mitchell, Suwinski, Swaggerty and Madris, and CSN (if he ever heals). There WILL be a Rule 5 draft this winter, and Gorski is a must-add. Probably 2 of these dudes are going to be outrighted (what, you’re going to carry EIGHT outfielders on your 40-man?!?). Would be good to, you know, find out which ones are worth keeping and which ones aren’t.

With Yoshi gone who are we going to complain about?

I wonder what the wait is to DFA JVM? Maybe just giving Suwinski another week to get the K’s down? I am thinking Gamel or Madris should start platooning with Chavis at first too. And what will they do with Allen? DFA him as well?

I actually think JVM sticks around for a while because someone in management got the insane idea that he’s playable at 1B.

Which, if you thought Yoshi was playable for 2/3 of the season, then yeah. Bar is quite low.

They played Madris there today maybe that’s a sign VanMeter is gone soon.

A Chavis/VanMeter platoon at 2B wouldn’t be terrible but between Bae, Castro, Castillo, Marcano, and of course Newman, we can do better. Neither should be playing 1B, though with one exception Chavis has been fun to watch there.

I fear the Chavis/VanMeter platoon will be at 1B for the rest of the season.

I think VanMeter is gone in a week or 2

We complain about the K rates of the kids but accept a 6/1 K/BB rate from Chavis who is finishing his 3rd year and will be in ARB next year? I call BS on that one!

Good decision, although should have been made much sooner….hopefully guys like VanMeter, Peters, Wilson, and Allen will be let go soon to open up spots for Suwinski, Bae, Bolton, Burrows, and possibly Swaggerty. It would be nice to know if the former first round pick can be part of the Pirates future and not waste 2022 as an opportunity to try to answer that question….giving at bats and innings to guys like Allen, Wilson, VanMeter, Heineman, Peters, Marisnick (if and when he returns) makes little if any sense….

VanMeter and Allen can be DFA’d today for sure, and Marisnick when he comes off the 10 day IL. Not sure we want to part with either Peters or Wilson. We still have guys like Chavis and Newman who really have no beneficial function for the Pirates.

At 1B, I might even be willing to play Martin to finish the season rather than a guy (Chavis) with 3 years of MLB experience and he is still striking out 6 times for every walk! And if Martin does not come out of his funk, then Nunez and Endy Rod at 1B?

Let’s hope a few more shoes drop today or at least by the weekend.

The weird thing about Yoshi this year is how completely he cratered in the power department. Certainly he careered it last year after he was picked up, and you’d be foolish to think he was a lock to repeat that over a full season, but he went in the opposite direction, hitting everything opposite field, weakly and on the ground. This isn’t a Hosmer situation, where that’s just his swing – Yoshi hit for power in Tampa in ’20 and in Pittsburgh in ’21. And then he just forgot how to pull and lift. Baffling.

Never ever liked his hand position at address…….hth do you ever get the bat back down and thru the hitting zone from where he’s starting…….and against MLB pitching? You don’t and he couldn’t. And you go back to Japan or KBO. Yoshi was a disaster, even moreso than Polanco last year.

With Marcano up, we’re once again in a situation with Indy where there are too few active hitters (and far too many pitchers).

I’d really like to see Alvarez and Shackleford promoted, which would move Park and Oliva to the bench. I’d also love to see a makeover of the Indy staff, with Eickhoff, Brice, O’Reilly and Hanhold released to make way for Priester, Selby, Flowers and Thomas. Time to get a look at the R5-eligible arms to determine whether you have some major league bullpen arms in the system…because God forbid they really need to carry roster churn like Stout, Ramirez and Beasley over the winter.

Speaking of promotions, Jacob Gonzalez really needs to be bumped to Altoona. The Pirates need to see what they have there. He’s currently hitting 333 with a 925 OPS and 11 HRs at GBO. Need to see if he can keep it up at an age appropriate level.

I wouldn’t mind him getting moved up, but he’s been largely average after his first 2 weeks in GBO. He’s been quite literally average with a 100 wRC+ when you take out his first two weeks in High A.

Greensboro and Bradenton present the biggest issue with promoting up through Altoona. Not really many players deserving of a promotion outside of maybe some “overagers”

J Gonzalez is 24 and plays the same positions (1B/3B) as Nunez who was just assigned to AA after the trade from St Louis. Also, Endy Rod, who plays C/1B and 3 other positions is the most deserving player at A+ for a promotion to AA. Both of those guys are 22.

Marcano seems to be more a a replacement for Josh Van Meter, yet JVM and his .180 average is still around.

The only reason VanMeter is still on the roster is due to not having any 1b depth.

Well, time to let Madris play some 1b and see how he does for a couple of months. Will be useful info in determining who is on the 40 man this winter.

That might make sense if VM remotely resembled 1B depth.

The alternative is Mason Martin.

Hmm. A bad fielding first baseman with a wRC+ of 73.

Hard to resist. At least Yoshi hit well in AAA.

I think Marcano will take most of JVM’s at bats and JVM will take Yoshi’s spot at the very end of the bench until Suwinski is brought
up. Hopefully later this afternoon.

So, Marcano is playing 1b vs righties?

Brownie said on the telecast that he’s close. I just hope he can hit

Time for some Chuck Noll thinking.

“Cutting players won’t be a problem. Stopping will.”

Van Meter will still play 1b. Newman will be blocking Marcano, unfortunately.

Newman is by far the better baseball player.

The goal is to play the best baseball players you have.

They’ll move Marcano around and he’ll get time.

Platoon at 2B with Newman and Marcano could be ideal.

My thought was Newman would play SS once a week while Cruz is the DH with Marcono in his place. Marcano plays second then, plays 2B 1-2 times a week in place of Newman, and then plays OF a few times a week.

Okay. Good start and long overdue but surely that’s all.

One down 3 to go including JVM

Ok, I’ll put my pitchfork away . . . for awhile. Three months too late but I understand that Nickles doesn’t like to pay people not to play. Yoshi just couldn’t hack it. But who doesn’t love Holderman for Vogelbach?

Last edited 6 days ago by PiratePrimate
1