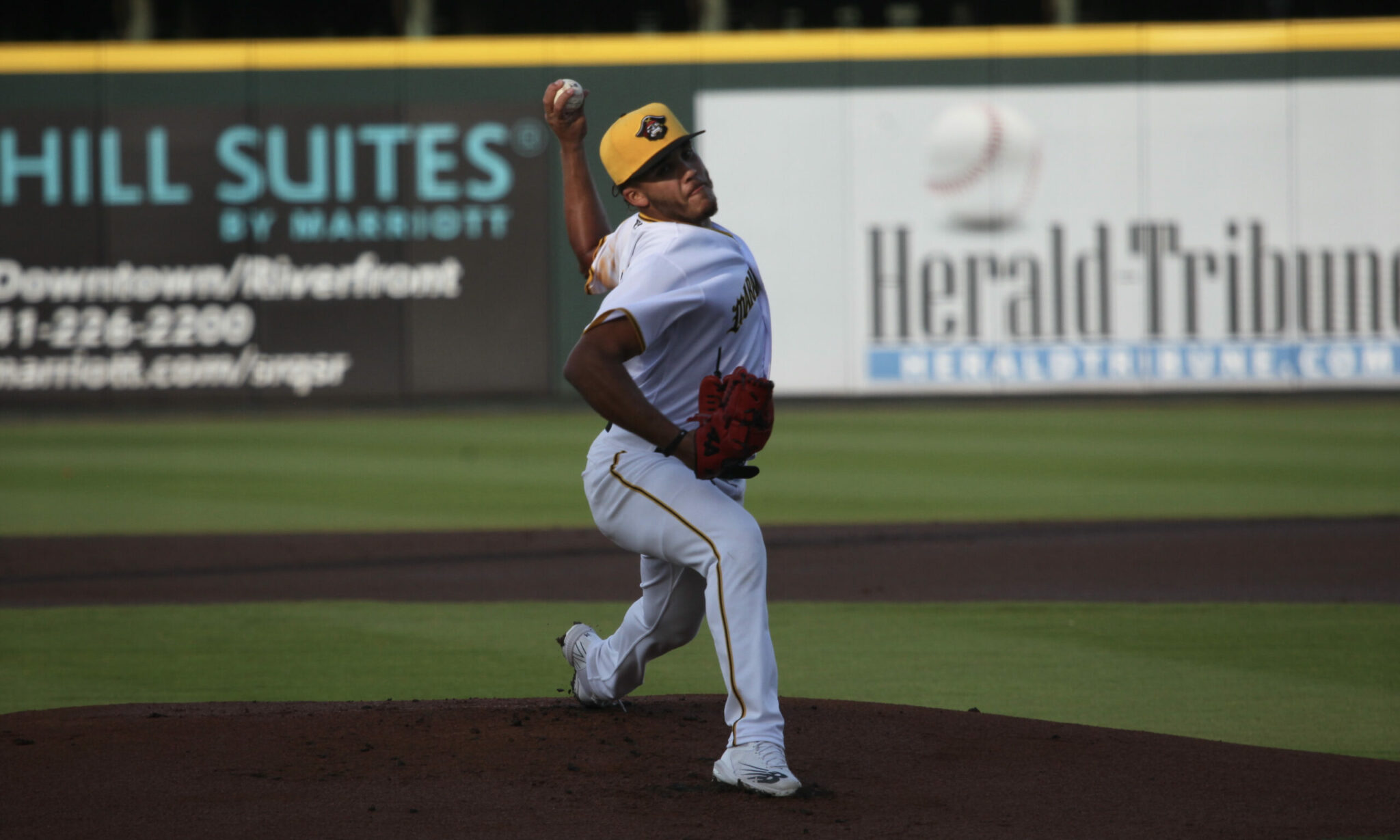 The 21-year-old Luis Peralta had an interesting start on Wednesday that was a microcosm of his career so far. Of the 11 outs he recorded for the Bradenton Marauders, nine were by strikeout. In 11 innings pitched this season, Peralta has 23 strikeouts, which is nearly half (50) of the total batters he has faced this year.

He also walked four in the 3 2/3 he pitched, and now has 11 free passes in as many innings this year.

Here’s a look at his strikeouts from Wednesday’s start with Bradenton.

Here's a look at 8 of the 9 strikeouts Luis Peralta had on Wednesday. There was a mess up recording and I missed one. Control wasn't great, but Peralta has shown some great stuff early this season #LetsGoBucs pic.twitter.com/k8cQu4oGjO

Continuing his great start to the season, Mike Burrows pitched five shutout innings for the Altoona Curve, striking out seven batters in the process. He didn’t get the win, Altoona didn’t score until after he left the game, but it was another strong start for Burrows.

Mike Burrows pitched another five innings today, not allowing a run and striking out seven. Here are all seven of them #LetsGoBucs pic.twitter.com/5dK7C4La7k

Here’s a look at those seven strikeouts, all of which came in the first three innings. He struck out the side in the first and third inning and escaped the fourth after runners got on second and third with just one out. On the season, Burrows has struck out 23 batters in 18 innings pitched.

The other, other catcher in Greensboro, Abrahan Gutierrez has spent most of his time at first base with Henry Davis as the primary backstop and Endy Rodriguez also getting time there.

Gutierrez, 22, has shown some decent power early on, slugging .400 with seven of his 13 hits going for extra-bases. That included his first home run of the season on Wednesday.

After Henry Davis recorded an RBI groundout, Abrahan Gutierrez extended the lead with a solo shot, his first of the year #LetsGoBucs pic.twitter.com/rLT3JSf8vc

A bonus clip, speaking of catchers, here’s a quick one of Endy throwing out a base runner. He had struggled early on in the season but has now thrown out a couple base runners in a row.

Endy Rodriguez getting the start from behind plate today, throws out a base runner here. He’s thrown out the last two steal attempts after starting 0-11, as ⁦@NolaJeffy⁩ pointed out to me #LetsGoBucs pic.twitter.com/37bG8ttNzY

Jase Bowen makes it 4-1 for the Marauders with an opposite field home run #LetsGoBucs pic.twitter.com/iDDxPUNql1

Jase Bowen has bounced all around the baseball field to start the year, but no matter where he lines up, the power has followed. After finishing last year tied for fifth in home runs in Low-A Southeast while with Bradenton, Bowen is currently in a tie for first place this time around with five.

Last year’s breakout star, Matt Fraizer has struggled out the gate but came up with a big hit for the Curve Wednesday, driving in the only two runs they scored on the day.

This is the only hit of scoring that Altoona got or needed, with Matt FRAIZER recorded a two run single here #LetsGoBucs pic.twitter.com/spED1lduDz