First Pitch: If There Was a Minor League Season, Part 3 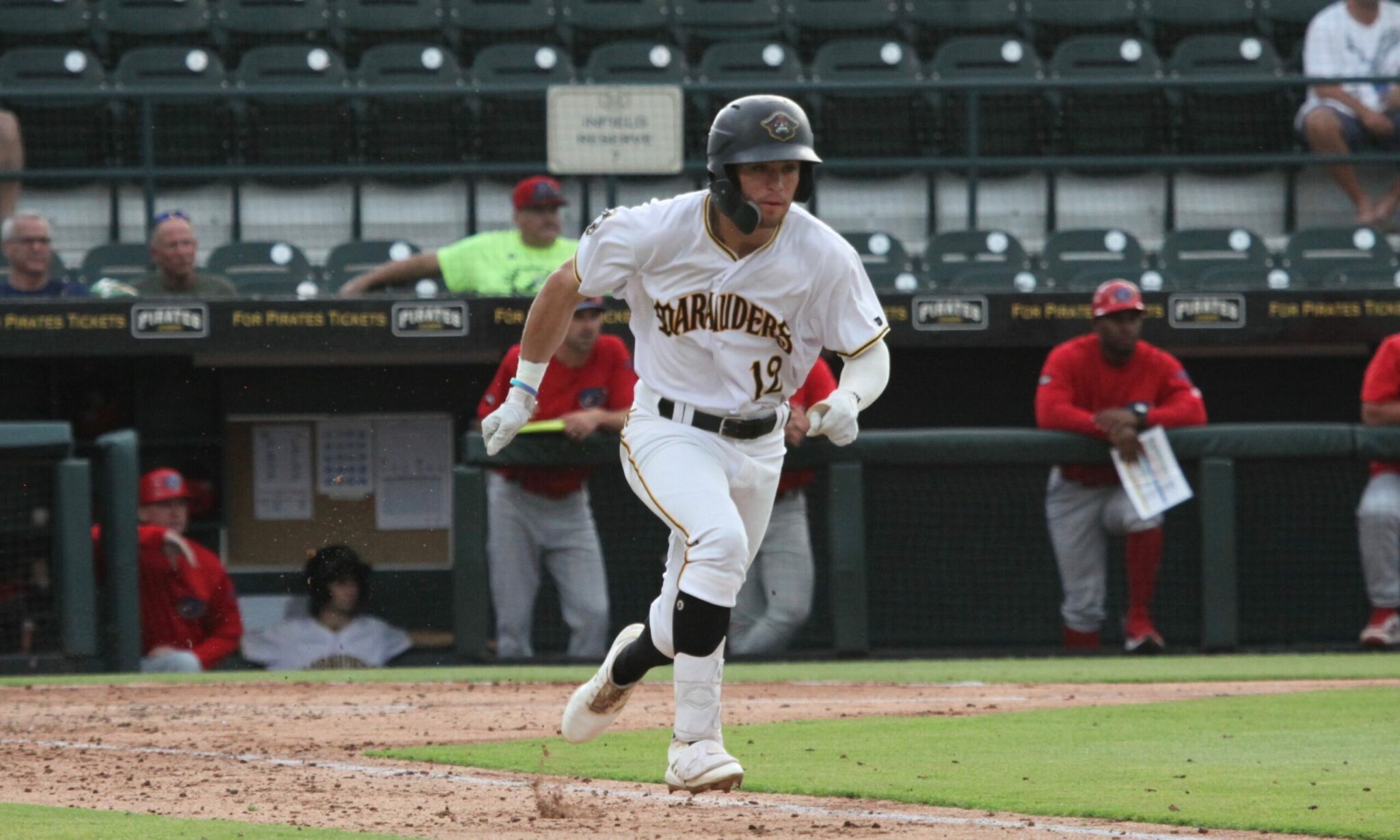 Today let’s look at the Altoona hitters for our hypothetical season.

The Pirates are going to face a lot of tough choices, in part due to the veterans they brought in for Indianapolis.  Some guys are going to be forced back to AA, which means that still other guys will be forced back to Bradenton.  I’m not really sure this is a good situation, because I tend to think that the best way to get players to the majors is to challenge them.

The Pirates’ addition of Andrew Susac and John Ryan Murphy will almost certainly force Arden Pabst and Jason Delay to return to Altoona.  It could also force Christian Kelley back to AA after he spent 2019 in AAA, but that seems kinda mean.  With Pabst and Delay at Altoona, Deon Stafford will probably be forced back to Bradenton.  This would be more annoying if any of them were better prospects, but Kelley, Pabst and Delay are very weak hitters, and Stafford doesn’t hit well enough to make up for marginal defense.  The Curve will get good defense from Pabst and Delay, at least.

The Altoona infield should be very interesting.  It could be, from first to third, Mason Martin, Rodolfo Castro, Oneil Cruz and Dylan Busby.

You could make a good argument that Martin was the best power hitter in the minors last year, taking into consideration the juiced ball in AAA.  On top of that, he was a good age for class A, but he still doesn’t get taken as seriously as you’d think because of the contact issues.  AA will be a very interesting test.

Castro could conceivably return to Bradenton, but I’m hoping not.  He got off to a bad start after a mid-season promotion in 2019, but he hit well in August, especially given the crappy hitting environment.  Castro has a chance to be good defensively at second and may profile something like Rougned Odor, i.e., good power but limited on-base ability.

Busby is another guy who could get stuck at Bradenton, especially if Hunter Owen gets forced back to AA.  He led the Florida State League in dingers and his ISO was 130 points above the league average, but he batted only .213 and fanned in 42% of his ABs.

The wild card here is Stephen Alemais, who’s recovered from shoulder surgery.  Alemais could be the best defensive infielder in the system, so he’ll certainly get playing time.  It won’t be at Cruz’ expense, so more likely it’ll be at second.  It’s also likely that Robbie Glendinning will be in AA.  He’s another factor that could push Busby or Castro back to Bradenton, as he has experience at second and third, as well as short.

Altoona also could have a couple of utility infielders in Brett Pope and Sherman Johnson.  Pope played for the Curve last year and was solid in a backup role.  Johnson is a free agent signee with a weak bat.

The two featured players in the Altoona outfield figure to be Travis Swaggerty and Cal Mitchell.  Scouts continue to regard Swaggerty highly despite merely solid hitting numbers.  He did, however, have a strong second half last year, and he offers speed and considerable defensive upside in center.  Mitchell is strictly a corner guy with good hitting ability and solid power, but he needs to improve his pitch selection and avoid extended slumps.  He turned 21 less than a month ago.

The Curve will probably also have Chris Sharpe and Bligh Madris back from last year.  Sharpe had a strong first half at Bradenton, and hit for power with some contact issues in the second half in AA.  Madris played regularly for the Curve last year and put up middling numbers.

Logan Hill also could return from last year’s Altoona team, and Lucas Tancas and Daniel Amaral could move up from Bradenton to serve as backups.

Danny Kolb, relief pitcher for the 2007 Pirates. He struggled in parts of four seasons with the Rangers before moving on to Milwaukee, where he turned his career around. In 2003 he had a 1.96 ERA and 21 saves in 37 appearances, then followed that up with a 2.98 ERA and 39 saves in 2004, making the NL All-Star team. The Brewers traded Kolb to Atlanta, where he posted a 5.93 ERA in 65 appearances. He was traded back to the Brewers and failed to regain his form from the 2003-04 seasons. He was released by Milwaukee and signed with the Pirates in February of 2007. He spent most of the year in Triple-A, getting just three relief appearances with Pittsburgh in mid-June. Kolb was released after the season and signed with the Red Sox for 2008, pitching nine games in the minors before being released, which ended his career. His cousin Gary Kolb played for the 1968-69 Pirates.

Sean Lowe, pitcher for the 2002 Pirates. He was a first round draft pick of the St Louis Cardinals in 1992 and made his debut with them five seasons later. After ten games in the majors between the 1997-98 seasons, he moved on to the Chicago White Sox, where he made 159 appearances over three season. On December 13, 2001 the Pirates traded Todd Ritchie to Chicago in exchange for Lowe, Josh Fogg and Kip Wells. Lowe made 43 appearances for the Pirates before he was released in early September. In 69 innings he had a 4-2 record and a 5.35 ERA. He finished that season with the Rockies, then spent most of 2003 in the majors with the Royals. That was his last season in baseball, leaving him with a 23-15, 4.95 record in 248 career games.

Mike Kingery, outfielder for the 1996 Pirates. He made his Major League debut in 1986 with the Kansas City Royals, seven years after signing as an amateur free agent. From 1986 until 1992 he split six seasons between the majors and Triple-A, with his only full season in the majors coming in 1987 with the Mariners. After spending all of 1993 in the minors, he signed with the Rockies and hit .349 in 105 games in 1994. At first glance, one would assume he was helped greatly by the thin air in Colorado, but he actually hit 29 points higher on the road that season. The following season his average dropped 80 points and the Rockies let him go via free agency at the end of the year. Kingery signed quickly with the Pirates and in 117 games in 1996, he hit .246 with three homers and 27 RBIs. He started 58 games all year and spent most of his time playing center field. He was released after the season and decided to retire from playing baseball to open a baseball school in Minnesota that he still runs to this day.

Bob Steele, pitcher for the 1917-18 Pirates. He was born in Canada and made his pro debut in the states in the majors, playing for the 1916 St Louis Cardinals. Steele had a 3.41 ERA in his rookie season, a number that doesn’t sound bad, but was actually rather high for the time (the NL had a 2.61 league average in 1916). His record showed just how bad the team was that year, as he went 5-15 in 21 starts and eight relief appearances. In 1917, he began the year with the Cardinals, but in mid-June he was shipped to the Pirates in exchange for infielder Doug Baird. The Pirates finished with a 51-103 in 1917 and Steele went 5-11, despite a 2.76 ERA. He began the 1918 season with the Pirates, going 2-3, 3.31 in 49 innings, before he was sold to the Giants on June 20th. He pitched 12 more games for the Giants that season and one last appearance in 1919 before his Major League career ended. Steele was sold to a minor league team just days after his last appearance and he finished his baseball career later that year in the minors.

Duff Cooley, first baseman for the 1900 Pirates. He made the majors as a 20-year-old in 1893, and already had seven seasons in at the majors prior to the Pirates acquiring him for cash from the Phillies on April 30, 1900. Cooley was a .315 career hitter in 696 games at that point. In 1899 for the Phillies he hit .276 with 31 RBIs and 75 runs scored in 94 games. That season was the first that he primarily played first base, after seeing more time at all three outfield positions in previous years. For the Pirates, he played just 66 games and hit .201 with 22 RBIs and 30 runs scored in 249 at-bats. He ended up playing another five seasons in the majors and even had a run of three solid seasons with the 1902-04 Boston Beaneaters. Cooley finished with a .294 career average and 849 runs scored in 1,317 games. After the 1905 season, he played another four seasons in the minors and managed for three years. At age 49 in 1922, he not only managed Topeka of the Southwestern League, he also pitched seven games.

Hank Gastright, pitcher for the 1893 Pirates. He began his Major League career in the American Association in 1889, pitching for the Columbus Solons. He had a rough first season, going 10-16, 4.57 in 222.2 innings, but he really turned it around in 1890. That year he went 30-14, 2.94 in 401.1 innings, helping Columbus go from sixth place the previous season, to a second place finish. In 1891 the Solons were back to a sixth place team and Gastright went 12-19 in 33 starts. The American Association folded after the 1891 season and he joined the Washington Senators, where he struggled with an ERA over 5.00 in limited time. He joined the Pirates to start 1893 and won three of his first five starts. The Pirates also won another start he made, though he wasn’t around long enough to pick up the win. He was released a month later and he signed with the Boston Beaneaters to finish the season. Despite a season ERA of 5.44 (It was 6.25 with the Pirates), Gastright had a 15-5 record, giving him the best winning percentage in the majors. Hank would pitch just 16 games in 1894 and one game in 1896 before his big league career was over. He finished his pro career in the minors in 1897.

The Pittsburgh Pirates head into the final week of their ...
63