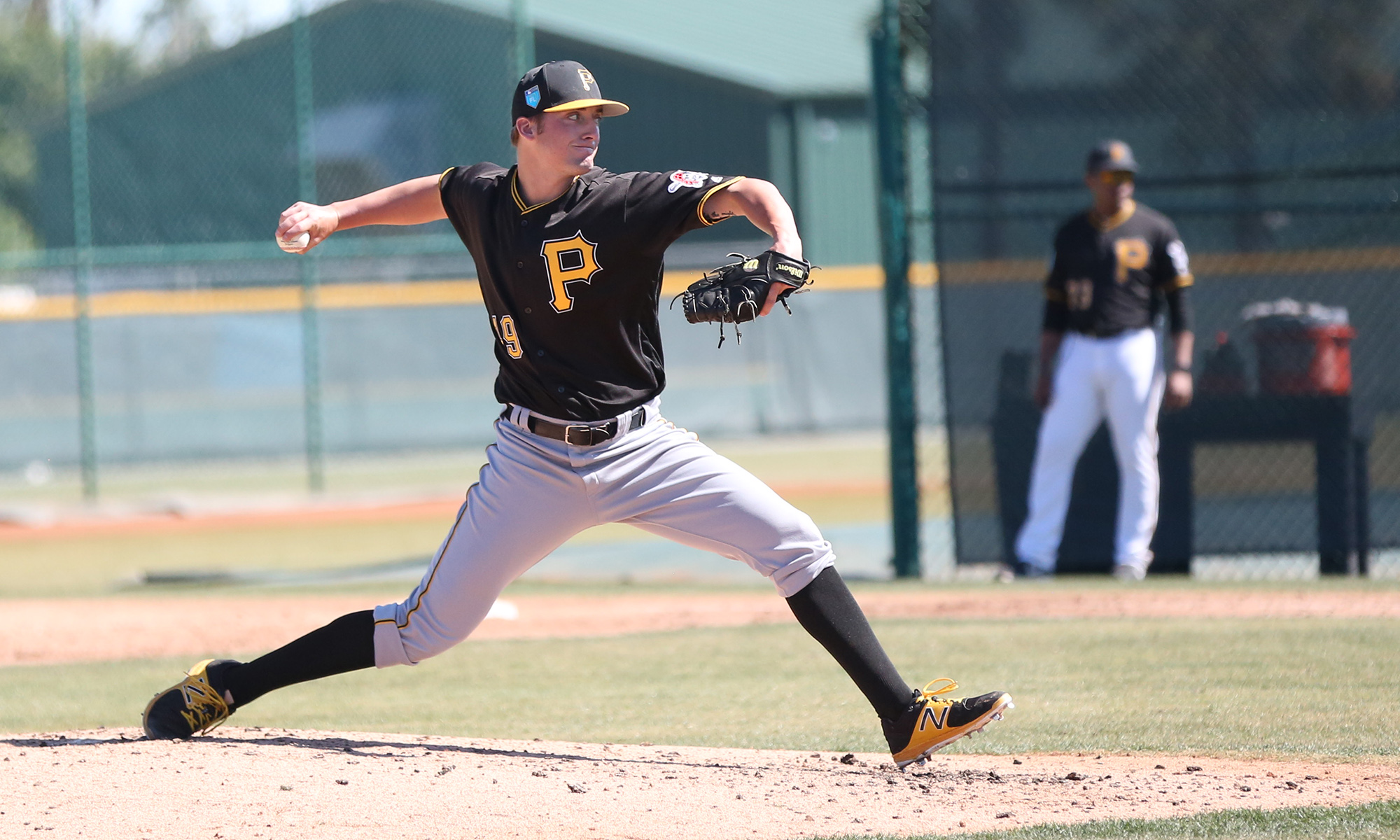 In our Bradenton season preview, we focused on the hitting of Travis Swaggerty, Calvin Mitchell and Oneil Cruz. That’s an impressive trio to have in the same batting order. There is also a lot of pressure on those players to succeed because the Pirates don’t currently have anyone who compares to them one level above at Altoona, or one level below at Greensboro.

On the pitching, the need for the starters to succeed isn’t as high because the Pirates have interesting starters at every level, and Extended Spring Training is loaded with high upside arms right now. That takes away some of the focus from the Bradenton pitching staff, but it’s actually a nice group led by Cody Bolton, Max Kranick and Aaron Shortridge.

Bolton and Kranick both have a lot of upside, especially after the progress they made last year. Both added some velocity, improved their secondary pitches and Bolton really filled out his frame. He was on his way to moving up the prospect charts until he was shut down in July due to a forearm injury. Despite being a college draft pick last year, Shortridge also has a lot of projection because he threw just 37.2 innings prior to his junior year, then was shut down after 30 innings with Morgantown. All three are among the top 35 prospects in the system.

The other two starters at Bradenton are Oddy Nunez and Domingo Robles. Both were top 50 prospects last year, but dropped out this year. Both are young lefties who have pitched well, but each of them lost velocity last year after adding it the year before.

Robles is an outstanding pitcher, with command over his fastball, changeup and curve, but it’s tough to make it to the majors when you’re fastball rarely breaks 90 MPH. In his debut this year, Robles was 88-91 MPH. That’s down about two MPH from his 2017 velocity, with the difference being that he was just 18 years old then and had a chance to add in the future.

Nunez went from 90-93 in 2017, to sometimes not even hitting 90 MPH in starts, going as low as 85-86 MPH late in games. He also showed worse control, which really hurt his prospect stock. He was actually demoted last year, while Robles finished the season in his place at Bradenton.

There are no sure things in the rotation right now. You have three guys who improved last year and two others who are young and have shown better stuff in the past. It’s a group that could eventually provide the Pirates with a lot of value.

** Baseball America had an article on Friday that listed the youngest players at each league in the majors and minors. Ke’Bryan Hayes is the eighth youngest player in the International League. The aforementioned Calvin Mitchell is the sixth youngest in the Florida State League. Oneil Cruz missed the list by 51 days.

Today’s Starter and Notes: The Pittsburgh Pirates won 6-5 in 10 innings over the Cincinnati Reds on Saturday afternoon. Chris Archer will make his second start of the season today. He threw five shutout innings in the home opener, picking up eight strikeouts. The Reds will counter with right-hander Anthony DeSclafani, who allowed one run over five innings, striking out eight batters, in his season debut against the Milwaukee Brewers.

The minor league schedule includes the season debuts of Max Kranick, Eduardo Vera and Brad Case. Kranick will need to be added to the Bradenton roster today. Vera will be making his Triple-A debut. Scooter Hightower will start for Altoona. He has already pitched once in relief this season. Bradenton will have Gregory Polanco and Dovydas Neverauskas on rehab today, joining Elias Diaz, who has been there since Thursday.

From Twitter again because MiLB seems to be behind on the video uploads. Here is a grand slam by Hunter Owen

Curve 7, Akron 5 in the fifth pic.twitter.com/NWaJolUpe8

In case you didn’t know, the Pirates allow facial hair for their minor leaguers now. Jerrick Suiter shows off his beard and hitting skills

Right where we left off. @jerricksuiter brings in the first run of the game and @Hunter_Owen11 knocks in a second run.

We're up 2-1 after the first. pic.twitter.com/9ZVLHCRhUu

On this date in 1979, the Pirates made a trade that could have ended up costing them the title that season, giving up starter Jerry Reuss for Dodgers’ pitcher Rick Rhoden. Reuss was unhappy about his role in Pittsburgh, while Rhoden was just entering his prime. The trade ended up being one-sided that first season when Rhoden injured his shoulder during his first start. He would miss the rest of the year following surgery on that shoulder. The Dodgers got good use out of their new pitcher. Reuss ended up staying in Los Angeles until 1987, winning as many as 18 games (twice) in a season.

Even while losing Reuss and getting nothing from the deal from Rhoden in 1979, the Pirates still went on to win their fifth World Series title that year. Rhoden would end up winning 79 games during his eight seasons with the Pirates, while Reuss helped the Dodgers to the 1981 World Series title, so the deal ended up working out well for both teams.

Former Pirates players born on this date include (more on them in the link above):

On this date in 1882, the Pittsburgh Alleghenys played the first game in Pirates history. It was a Spring Training exhibition game against the best cricket players in Pittsburgh. To the surprise of no one, the Alleghenys destroyed them, winning 32-4. First baseman Jake Goodman nearly hit for two cycles, collecting three singles, two doubles, two triples and a home run.