The Pittsburgh Pirates announced some non-roster invites on Monday morning. We gave a list of players invited during the winter mini-camp two weeks ago, but some have been added, including a new free agent signing.

Among the players not on our list, infielders Pablo Reyes and Cole Tucker, outfielders Jason Martin and Bryan Reynolds, pitchers Brett McKinney, Tyler Jones and Damien Magnifico and catcher Ryan Lavarnway, who is a new signing. Reynolds and Martin were the only two players traded for last week who weren’t on the 40-man roster. The other four in those trades get automatic invites due to their roster status. Magnifico was selected in the minor league portion of the Rule 5 draft.

There still could be more added before Spring Training begins.  The one absence from our list to this list is Montana DuRapau, which may be due to his 50 game suspension over the weekend. It wouldn’t be surprising if the suspension caused his invite to be rescinded.

Ryan Lavarnway is a 30-year-old catcher, who has played parts of six seasons in the majors, though he has played just six big league games over the last two years. He spent most of last year in Triple-A, where he put up a .668 OPS over 82 games in the hitter-friendly Pacific Coast League. Lavarnway split the 2016 between Double-A and Triple-A for the Braves. Over his big league career, he has a .201/.262/.318 slash line in 140 games. He was once considered a top 100 prospect due to his power potential and his defense, which improved greatly from the time he was drafted. In 2012, he was voted the best defensive catcher in the International League.

This NRI announcement from the Pirates, also serves as the signing announcements for a few players. Jin-De Jhang and Casey Sadler were re-signed back in October as minor league free agents. We covered Tyler Jones and Bo Schultz back on January 5th. Schultz was at the winter mini-camp, Jones was not. It’s also the announcement for Jackson Williams re-signing and John Stilson signing, which we reported back on December 19th. 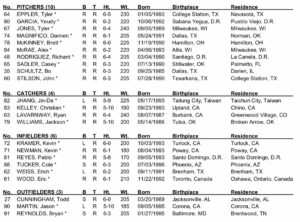