Pirates Notebook: Evolution of Jeff Locke; Reinforcements on the Horizon 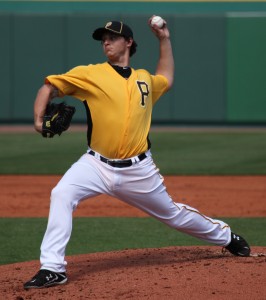 The Jeff Locke on the mound this September compared to this time last year is a different pitcher. With more experience not only at the Major League level, but also at the Triple-A level as well, Locke is more confident this season.  The left-hander incorporated a new turn in his delivery during spring training, and put together his best season to date  in the minors since being drafted out of High School in 2006 by Atlanta.

Manager Clint Hurdle said that from the conversations he had within the organization, Locke got better as the season progressed. Only in the month of May had Locke posted an ERA above a 3.00 with Triple-A Indianapolis as he finished with a starter-leading 2.48 ERA over 141.2 frames (24 starts).

“The mound presence, the rhythm, stayed consistent and evenly paced,” Hurdle said. “The ability to throw strikes just really ramped up from when we saw him at the end of last season. The ability to use his secondary pitches in offensive counts for hitters, to throw his changeup, to throw his breaking ball. The probably two that jump to the forefront for me, from what I’ve seen — the ability to get the ball in on right-handers, and the development of the changeup. To throw it at anytime. [Those are] the two things that really jump out at me.”

The other difference for Locke has been the new delivery this year. The turn allows Locke’s back to be completely turned, to where you can read his name and number on his jersey, before turning to the plate before he delivers. That, too, Locke said has helped him have success this season.

“That can help him get set up,” Hurdle said. “Just for delivery purposes. What that does is actually enter them and establishes them over the mound to hold the position before they go. That definitely could play some benefits for him. I do think more often than not [it’s] pitching with conviction. Pitching to contact is one of the things I was concerned about coming out of the Major League season, [he] was going to be gun shy coming back. It was a hard lesson for him last year. There were some hard outings. And not at all. He just realized what he needed to do to improve.”

Locke made two outings in relief with Pittsburgh, where he tossed 4.1 scoreless frames, before the Pirates decided to move him into the starting rotation to get a long look at the lefty. His last trip to the mound, Locke allowed five runs over five innings, but pitched better than his box score showed. On Sunday, Locke was very effective against Chicago.

Joe Mather took the first pitch from Locke, and dropped it into shallow right field to start the game. But Locke was able to get Darwin Barney to hit a grounder to short for a double play to clear the bases. Anthony Rizzo hit a single up the right side, but was left stranded after Locke got Alfonso Soriano looking on a 1-2 fastball.

After tossing a scoreless second, Locke worked himself into a jam in the third. The rookie allowed a one-out single to Mather, and Barney followed with an infield single after Clint Barmes attempted a great running grab of a ball hit to the hole to his right. Locke was able to get a fly out for the second out and whiffed Soriano for the second time in as many at-bats to leave both runners stranded.

Locke gave up two runs off the long ball in the fourth frame. Locke retired his first batter, then gave up his first run of the outing after Josh Vitters took a first pitch fastball left over the heart of the plate and launched it to left field for a solo-home run. With two outs, Anthony Recker dished up the second homer of the frame and took 0-1 fastball to straight away center field. Locke notched his fourth strikeout to end the two run inning.

“The home run to Vitters was a first pitch fastball,” Locke said. “It was up in the zone, it was something he could turn on and he hit it well. That goes on me. That’s just a fastball to try to get ahead there, and he hit it out of the park. The 0-1 just needed to be inside. It wasn’t in enough, and he was able to hit it to center.”

“You don’t get a whole, get out of jail free cards here. You make bad pitchers, and hitters are going to capitalize. That’s what happened today, that’s what happened last week. They say solo homers are never really going to hurt you, but when you give up multiple ones, they’ll add up. Just got to keep attacking the strike zone and keep being efficient.”

Locke followed that inning up by tossing a scoreless fifth, which included two whiffs. In the bottom of the fifth, the lefty picked up his first big league hit with a single that bounced down the third base line.

“It’s always neat to get a hit,” Locke said with a smile. “Especially at this place. It’s the big leagues here. You want to try and help the team in any way you can. It’s pretty encouraging to get up there and find a way to get on base.”

Locke allowed just one base runner in the sixth, who reached on an error by Brock Holt, to finish out his solid second big league start this season.

“At the end of the day, no walks, six punch outs,” Hurdle said. “He pitched effectively. A couple balls he tried to get in, didn’t quite get in for the solo home runs but that being said, he pitched a good ballgame. He changed speeds well, handled the middle of their order pretty well…Especially in Soriano’s case and Castro. A very professional outing for Jeff today.”

Overall against Chicago, Locke allowed two runs on seven hits over six frames. He didn’t walk a batter and struck out six while throwing 89 pitches, 60 strikes. Over his last two outings, Locke has walked just one, while striking out 12 over 11 innings. Last season in September, Locke walked 10 batters compared to five strikeouts over four starts, but said he hasn’t had the same control issues this time of the year.

“I was able to have a few strikeouts today to help break up the outs a little bit,” Locke said. “Everything felt pretty good. It’s pretty encouraging. Last season I had control issues this time of the year, so it’s pretty encouraging to throw the ball over the plate and get outs.”

“I think it’s just the course of the long season. You start to feel it, you start to know you’ve thrown a lot. Last year it was almost unexplainable. Maybe it was just nerves, maybe it was just getting my feet wet up here, but this year up here, I’ve felt like I’ve had much better command of the strike zone, move the ball in and out, change speeds. It’s been like night and day in that aspect.”

Reinforcements on the Horizon

Triple-A Indianapolis lost game four in the first round of the playoffs on Saturday to end their 2012 season. With their season ending, several reinforcements will be on their way to join the big league club in Cincinnati on Monday.

“We’ll probably add another couple guys here,” General Manager Neal Huntington said. “It’s a 40-man roster. We want to make sure we give Clint every weapon in the world to try to win the game that day. Whether it’s a pinch runner, defender, left-handed pinch hitter, right-handed pinch hitter, a couple length guys out of the bullpen or match up guys. We want to make sure we don’t leave any stone unturned and give him as many weapons as we can.”

Some notable players that could be considered are relievers Bryan Morris, Daniel McCutchen, Evan Meek, and infielders Chase d’Arnaud and Matt Hague. Along with several players, Huntington also said they will bring up some of the Triple-A coaching staff to help finish out the regular season with Pittsburgh.

“We will probably trade out some of the coaches that are right now,” Huntington said. “Let them go home, let them get a couple days before Instructional League, and then we’ll bring that Triple-A staff and have them be around for the remainder of the season. They can alternate going in and out of the dugout.”

Walker Could Return On Wednesday

Neil Walker said after the game on Sunday that he felt good after taking swings from the left side today. The second baseman said he hopes to hit during Jeff Karstens (hip flexor) sim game on Tuesday in Cincinnati, and if all goes well, hopes to be available to at least pinch hit on Wednesday.

Charlie Morton is on track, Huntington said, from recovering from Tommy John Surgery in June. The right-hander was placed on the disabled list in late May after posting a 4.65 ERA over nine starts with Pittsburgh this season.

“Everything from what I read and what I’ve seen here is everything is going fine,” Huntington said. “Obviously a long, lonely process, especially when it’s based in Bradenton. But we’ve tried to bring Charlie back a couple times to allow him to continue to feel a part of it, because he is. Everything seems to be on track. And everything seems to be moving along just as expected and hoped.”

Gustavo Nunez, the Pirates Rule 5 pick in December, finished the 2012 season on the 60-day disabled list. The infielder underwent an ankle surgery, and made a rehab assignment with Double-A Altoona in August, but wasn’t able to be fully healthy to join the club at the Major League level.

“Nunez has continued to have soreness in the ankle,” Huntington said. “We got him out on a rehab and tried to do everything we could to see if he’d be ready to be activated up here on September 1st, and he just wasn’t. He still had discomfort, he still had soreness. He was not ready to come up here to compete, not ready to contribute. He’ll finish the season on the 60-day DL.”