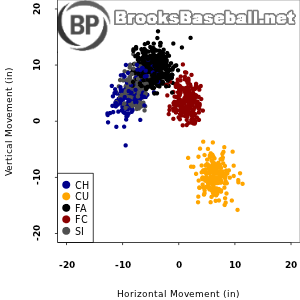 Hefner’s four-seam fastball sits around 90-92 MPH and is fairly straight. He also throws a sinker that is generally in the 89-91 MPH range and an 86-90 MPH cutter that somewhat resembles a slider. His only breaking ball is a slow curve in the 73-78 MPH range, while his primary offspeed pitch is an 83-86 MPH changeup with some occasionally solid sinking movement. He has shown a willingness to throw the change against righties early in his big league career. Pitching in his rookie season, Hefner has shown the ability to miss bats with the four-seamer, but his curve and changeup have both been pretty hittable.