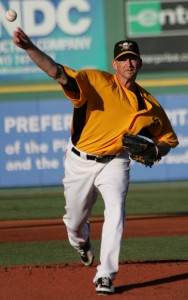 When the Pirates have had struggles or been battling through a losing streak, A.J. Burnett was the stopper for Pittsburgh. Burnett entered game action having won four straight decisions and 13 of his last 14. When the team needed a pick me up, the veteran right-hander was the stopper for the club.

Burnett looked to become the Pirates first 15 game winner since Todd Ritchie in 1999. But Padres’ starter Jason Marquis was near hitless and the two-sided Burnett sent the Pirates their third straight loss. Not since June 24-26 had Pittsburgh lost three straight games.

After needing just four pitches to retire his first two batters, Chase Headley took the fifth pitch thrown by Burnett and deposited it into the seats in right center field. It marked the third home run from Headley in his last two games. He also went deep twice in the Pirates loss on Friday. Carlos Quentin followed with a single to left before Yonder Alonso was hit by a pitch. Burnett was able to get Will Venable swinging on an 0-2 curve to leave both runners stranded.

Burnett bounced back in the next frame by whiffing three of the four batters he faced until giving up a run in the third inning. After Everth Cabrera tripled into the notch to start the frame, Headley picked up his second RBI of the game with a groundout to second.

The right-hander had almost two different sides to him on Saturday. When he was on, he was very efficient. But the few mistakes he left over the plate hurt him. Burnett went on to strike out six of his last eight and nine over four innings starting in the second. The long ball hurt Burnett once more in the fifth.

“There were two sides to him,” Manager Clint Hurdle said. “It [was] kind of little bit remindful of a start he had earlier here in the season when he gave up some runs and some hits. When he was on, he was on. And then there just was some sequences that were really sharp and efficient, especially the breaking ball for the punch outs. Fastball command probably wasn’t as consistent than it’s been his other starts. And then he made a couple mistakes over the middle of the plate.”

What caused Burnett to struggle he said, was his sinker.

“Those were the balls that got hit,” he said. “They come over the middle of the plate, and you can’t miss over the middle…Got to keep the ball in the park, give the team a chance. The five spot doesn’t really help. I missed some spots and they capitalized on it.”

Venable took the second pitch of the fifth frame and launched it into the seats in right center field. Burnett, James McDonald and Wandy Rodriguez have each given up two long balls in their last starts.

Burnett was unable to work himself out of the sixth inning for the first time since July 3, when he went five-plus. Back-to-back two out singles and a walk loaded the bases. The second free pass to Headley to scored the fifth run and sent in Jared Hughes from the bullpen to retire the final out.

Overall, Burnett allowed four earned on nine hits over 5.2 innings. He walked two and struck out 10 — which tied his season-high. He also whiffed 10 on April 8 against Washington.

“That was the story, beside the fact that Marquis threw a great game,” Burnett said of his 10 strikeouts. “I missed some spots with my sinker and it hurt me. I had a good hook today. That was probably all I had. As far as being able to pitch in consistently, I was off. I was missing over the middle. They drove some balls and they hit some balls in good spots.”

The other side of the story was the fact that the Pirates were held to six no-hit innings from Jason Marquis, who went on to pitch a complete game two hit shutout in the 5-0 loss.

“They’re just playing the game,” Hurdle said of the atmosphere in the dugout in the seventh. “We’re well aware of the fact that we don’t have a hit. But we just play the game, and we’re trying to win the game. Guys are still engaged, there is noise, there’s action, there’s all of that. We’ve pushed the last three days and haven’t gotten the result that we wanted. There’s been no fall off in preparation or intensity or dugout focus.”

Snider, who broke up the no-hit big with an infield single to second base, left the game due to tightness in his right hamstring. He will be reevaluated tonight and tomorrow.

Snider said he felt tightness running down to second base on the groundout and just wanted to be overly cautious. He said he iced it after the game and expects to be ready to go tomorrow and that it wasn’t a big concern.

Innings for Starting Staff in a Good Place

Manager Clint Hurdle announced after the game on Friday that he would insert Kevin Correia into the rotation for now, giving the rotation a current six-man. The move was to both give the starters an extra day off during the dog days of August, but also to give Correia the opportunity to start.

“It’s a combination of both,” Hurdle said. “The taxing part of the season, and I think this gives everybody a good opportunity for the guys, who have been on a regular routine, to catch a day. And for him to come in and follow up with another outing. See where that takes us.”

Hurdle also said that he feels the starting staff is in a good place innings-wise at this point in the season. Wandy Rodriguez leads the staff with 149 innings pitched, with James McDonald second with 141.

“As we monitor the pitches thrown each month, as we monitor the innings and projections as if everyone makes starts to get to the end, and even with the bullpen work, we seem to be in a pretty good place,” Hurdle said. “We maintain velocities. Even when they’re off, they’re not more off of what they’re indicative of other teams and league as you monitor and you get information just to see how you’re matching up with other guys with similar usage situations. I think the activity is in a much better place.”

“Karstens is back fresher than before because of the down time. As I was mapping out even today, projecting innings if everybody made their starts, there’s nobody that would go over 200 probably. Just maybe underneath it unless we throw out some complete games, three or four eight inning outings, something like that. We feel good about that.”

What’s also a luxury for the club is the fact that they have currently seven starters on their club. With the six-man staff, plus Jeff Locke, who is currently the long man in the ‘pen, the Pirates have a lot of depth. They even have several arms in Triple-A that are ready but haven’t had the need.

“You like to feel that there’s depth, and there’s usable depth,” Hurdle said. “Jeff [Locke] has already spoken to, just the difference of his feeling coming back this time versus being engaged last year when he came up and we gave him a handful of starts….To get that work, to figure his way around. I think it was easier transition for him coming in. The season, it continues to prevent challenges…We lost Charlie [Morton] for the season and Jeff [Karstens], since then we haven’t had any physical ailments to take away from our starting rotation depth. So there’s some security there without a doubt.”

Jason Grilli recently saw a dip in his velocity in his last outing, in which he allowed four earned runs without recording an out. Since then, Hurdle has given Grilli some extra rest and used Chad Qualls when needed in the eighth inning. The dip wasn’t expected to be anything serious, just the length of the season tiring his arm.

On Saturday, Hurdle said that he thought Grilli’s velocity looked good and fresh after seeing him toss a perfect frame with a strikeout.

“The one thing for all of us is that this game can be played a number of different ways,” Hurdle said. “The one thing you can’t ever let do is you can’t let something or circumstances or somebody take your confidence from you. Situations, an outing, a game, a couple days, your confidence is your confidence. Your confidence, you have to have ownership of. It’s just a conversation that him and I had. I think he got past the part that, ‘you know what? I didn’t pitch well. I just need to go out and pitch. And compete.’ I’m sure the rest probably helped a little bit. He looked a lot fresher tonight, a lot crisper.”