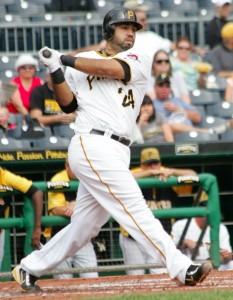 CLEVELAND, OH — After the Pirates failed to score a run in the 2-0 shutout on Friday night in Cleveland, Manager Clint Hurdle said their biggest challenge at the plate this season has been not being ready for good pitches to hit. The club whiffed 10 times on the day and connected for just five hits, stranding seven on base. They had several missed opportunities to score, but were unsuccessful at coming through in the clutch.

“We’ve still got too many guys that just want to hit, rather than getting a good pitch to hit,” Hurdle said. “We’ve got to have a better understanding and awareness of the game I think at times. The game doesn’t know the game’s important but we found ways to bring all this drama to us when we’re in the box. Not so much anywhere else, but in the box. Like, I’ve got to be the guy. No, you don’t. You need to be the guy if he throws you a good pitch. Just need to be ready to get a pitch to hit and we’re working way outside our comfort zone in some critical at-bats.”

The message came through loud and clear to the team on Saturday as the Pirates found a way to connect with several good pitches. Cleveland sent Ubaldo Jimenez to the bump and the right-hander gave up four runs in his outing. The Bucs aren’t known for having a power bat lineup, but four big power swings of the bat came through in the win.

“It’s not about homers,” Hurdle said. “It’s not about anything more than we’ve got to find a way to have better at-bats. Homers are thrown as much as they’re hit. When we’ve got a good swing going, the ball is elevated, you hit it up, it’s high, it goes. You get in trouble when it’s low and you’re trying to create lift and do different things.”

To lead off the second inning, Pedro Alvarez crushed an 2-0 pitch from Jimenez 376 ft to right field. The third basemen heard loud boo’s from the crowd at Progressive Field as he circled the bases to tie the game at 1. It marked his ninth of season and first since May 27. Alvarez was just 4-for-34 (.118) before the solo-blast.

The second home run from Pittsburgh came in the sixth inning. First baseman Casey McGehee went yard for his third of the year (and this month). McGehee, too, has been swinging a hot stick going 9-for-21 (.400) over his last six contests. He also hit a two-run single in the 9th inning. August 3, 2011 was the last time McGehee had a four RBI game when he was with Milwaukee.

“He was in a rough place early,” Hurdle said of McGehee. “He grounds into a double play [second at-bat]. Sometimes those things can send you the wrong way. He stayed positive. He stayed focus and he got a breaking ball that was hanging and was able to bang it to the outfield bleachers to give us a cushion. We felt very optimistic at that point. Just getting some breathing room for A.J. [Burnett] on the mound.”

The ball continued to fly out of the ballpark.

The lumber came out swinging again in the seventh after Alex Presley hit the third long ball for the team off reliever Tony Sipp. It was his fourth of the season, but just the second career homer off a left-hander by Presley. His other came off the Bucs Triple-A starter Jo-Jo Reyes.

Alvarez launched his second home run in the game — this time off lefty Nick Hagadone to right-center field. It marked the first time since July 21, 2010 that Alvarez had a multi homer game. He has three career multi long ball games since his rookie season in 2010.

“I think we did a good job of pitching, defense and hitting,” Alvarez said. “Anytime we can do that, it’s just proof of what we can do. We played some tough games the last couple days. The first few, we didn’t really let that phase that. Just kind of shows the kind of team that we are.”

Not since July 8-August 3 of 1990, when Doug Drabek was on the mound, had a Pittsburgh starter won six straight starts as a Pirate. But on Saturday afternoon, right-handed pitcher A.J. Burnett did just that. The veteran continued his solid 2012 season after tossing seven innings holding the Indians to two runs. Burnett has not allowed more than three runs in his last eight starts while posting an 2.32 ERA over 53.1 innings during that time frame.

“It means a lot being here,” Burnett said of the environment as a Pirate. “They accepted me right off the get go in spring training. It’s been great ever since. They come out and play hard everyday. It’s fun to take the mound for a bunch of guys like this that go out and battle day in and day out no matter what they do. I tell Rod [Barajas] everyday how much fun it is to work with him again. It’s been a good run.”

The two lone runs that Burnett gave up came via the long ball.

With one out in the 1st, Asdrubal Cabrera took a 2-2 pitch from Burnett for a solo-shot 364 feet to right field. After the 21 pitch first frame, Burnett locked in until giving up his second long ball of the game. Casey Kotchman took the first pitch for a solo-blast to right field to tie the game up at 2. Burnett went four games since allowing his last homer (Prince Fielder in Detroit) until today in Cleveland. It was his longest stretch of games without allowing a home run since also four straight April 17-May 4 in 2010.

“It set the tone for us,” Hurdle said. “He got nicked, a couple solo-home runs. Nobody in front of him. He made pitches. He went after people aggressively. A lot of first pitch strikes. He was efficient with his game. I thought he pitched another very, very professional ballgame.”

“I just feel like I’m relaxed more [here],” Burnett said. “It doesn’t matter if guys are on, or what’s the count, I’m confident I’ll make the pitch. I give up two solo home runs and our guys they came back. They came out swinging…Pedro have a game like that, and Casey. Especially Pedro. He’s struggling and what he’s been doing. Just don’t give up and keep swinging so that’s good to see. It was a good win for us.”

‘Pen Dominant, but not Overworked

The Pirates bullpen this season has not only been dominant — their 2.79 relief ERA is No. 4 in the Majors and No. 2 in the National League — and hasn’t been overworked — their 196.2 innings is ranked mid-pack in the Majors this season.

After Burnett pitched 6.2 innings on Saturday, the ‘pen combined to toss the final 2.1 scoreless innings in relief.

Hurdle has been set with not overworking his arms from the bullpen. Only Jared Hughes and Joel Hanrahan have pitched three straight days in relief. Once they pitch on back-to-back outings, Hurdle usually deems them unavailable unless an emergency.

“I believe we’re in a very good place,” Hurdle said. “Our numbers are down. They’re usually under everybody else’s. Last night I did not take [Grilli] out because of two walks. I took him out because he had 23 pitches. When we’ve had Hanrahan [pitching], we’ve banged him because he had the 24-25 pitch mark. We don’t want them to throw anymore than that.”

“I had to reassure Jason that I’m not going to sacrifice him. Somebody throws a 10 pitch at-bat in there, he goes 33 pitches, it’s a game in June we’re one run down already. It makes no difference to me. You’re coming out. You can pitch today if I need you. I think that has been monitored about as well as we can. I think their health, we haven’t had any hiccups health-wise so far, which is hopefully a result of that. Knock on wood.”