Paul Maholm and PNC Park are the Perfect Match

Earlier I provided an update on the expected regression by the starting pitching staff for the Pittsburgh Pirates.  One of the things I noticed was with Paul Maholm’s home run per fly ball ratio.  Maholm has regressed in this area since I looked at the numbers a month ago.  He still has a 7.4% HR/FB ratio that could be considered lucky.  However, when looking at his career numbers, his 7.4% HR/FB ratio is in line with what we’ve seen out of him over the last two years.  In 2009 he had a 7.3% HR/FB ratio.  In 2010 he had a 7.7% HR/FB ratio.

My thought was that this could be due to pitching in PNC Park.  Maholm is a left hander, which takes away the advantage left handed hitters have at PNC Park.  Left field isn’t as friendly for hitters at PNC when it comes to home runs.  In fact, PNC Park is the hardest home run park for right handers in the National League.  The theory would be that Maholm doesn’t see as many fly balls leave the yard because a lot of his fly balls are contained by PNC Park’s spacious left field.

Those aren’t extreme numbers, but they do show that Maholm is benefitting from PNC Park.  So what about the actual results?  Using a great tool on Katron.org that tracks the hit location of batted balls, we can take the balls that were hit in to play in PNC Park, and see where they would have ended up for Maholm in other parks.  PNC Park is extremely tough on right handers, which provides Maholm an advantage.  But what about the exact opposite?  What about a park that favors right handers?  Let’s see how Maholm would have done at Minute Maid Park, rather than PNC Park, over the last three years. 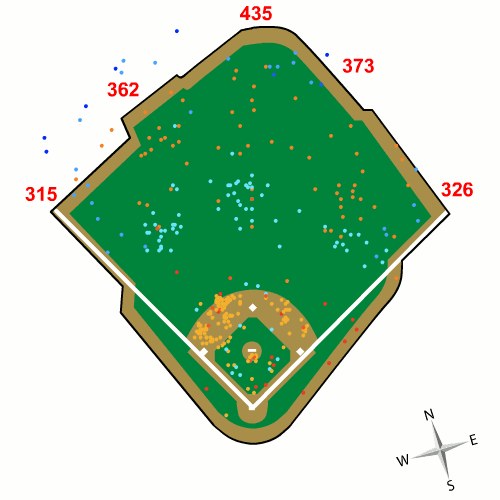 Maholm allowed six home runs at PNC Park in 2009.  All six would have been out in Minute Maid Park.  In addition to those six homers (illustrated in dark blue above), three of Maholm’s PNC Park fly outs would have left the yard in Minute Maid.  He would have also seen five or six potential home runs from his doubles.

This data comes with a big disclaimer that the dots are where the ball was fielded, and not where it initially landed.  Three of the doubles (illustrated in light blue) clearly were fielded in the notch.  Those didn’t necessarily land in the notch right away.  But overall, this gives us a good idea of how Maholm was helped by PNC Park in 2009.  Three of his fly balls would have been home runs, and maybe even a few of his doubles would have gone out. 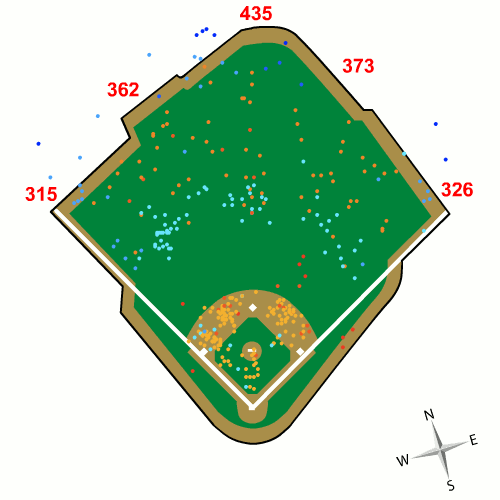 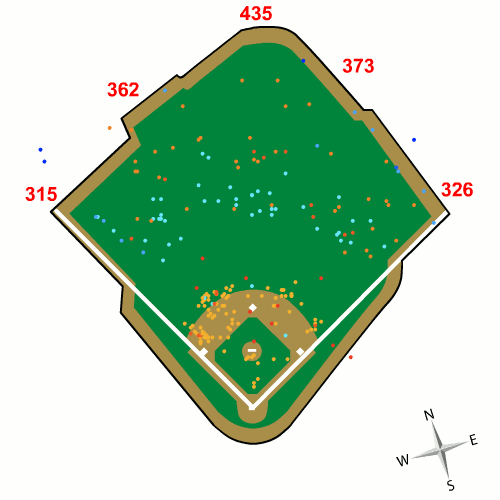 PNC Is Built For Left Handers

Obviously the above arguments would work for a lot of left handers.  Left handed pitchers have an advantage in PNC Park.  They take away the short porch in right field, and have a lot of room to work with in left field.  Putting Paul Maholm in a right handed friendly park would see a few extra homers per year, which definitely would boost the HR/FB numbers.  In most parks, you’re probably not going to see that big of an impact as you are at Minute Maid.  Maybe one or two hits would leave the majority of parks, but I don’t think PNC Park holds in a ton of shots that would be homers anywhere else.  Still, even one or two home runs that turn in to outs at PNC can help a pitcher drastically.

The reason Maholm benefits from PNC Park so much more than other left handers is that he’s an extreme ground ball pitcher.  In his career, Maholm has a 52.2% ground ball ratio.  The league average is 42%.  That obviously means that he’s giving up fewer fly balls.  The home run per fly ball ratio is a percentage.  It doesn’t matter how many fly balls you give up, according to the league average, you’re going to see about 10% of those fly balls leave the yard.  For obvious reasons, ground ball pitchers are ideal, as they limit fly balls, and limit home run opportunities.

Maholm not only benefits from PNC Park by being a left hander, but he benefits by being a ground ball pitcher, thus limiting his fly ball opportunities.  This year, only six other left handers in the majors have a better ground ball ratio than Maholm: Zach Britton, Ricky Romero, Jaime Garcia, Jon Lester, Gio Gonzalez, and C.J. Wilson.  This has actually been a down year for Maholm, as he’s at 48.8%, down from his usual range of 50.9%-53.6%.  With his normal range, Maholm would rate ahead of Lester, Gonzalez, and Wilson.

All of this shows up in the results.  In his career, Maholm has a 3.72 ERA at home, and a 5.03 ERA on the road.  This year he has a 2.63 ERA at home, and a 4.10 ERA on the road.  It’s not unusual for a player to put up better numbers at home, especially for a guy like Maholm that has pitched at PNC Park since 2005.  The results just usually aren’t this divided.  This all makes you think about Maholm’s future.  PNC Park is definitely one of the idea parks for him to pitch in.  He would be a disaster at places like Fenway Park, Citizens Bank Park, or Minute Maid Park.  As for the Pirates, being able to keep one of the better ground ball left handers in the game wouldn’t be a bad thing, as he’s obviously a great fit for PNC Park.  I’d still consider dealing him for a big return in prospects, if such a deal was available. The value of a guy who is good at home and struggles on the road can only go so far.  But Maholm clearly has value to the Pirates, even if the majority of that value comes at PNC Park.