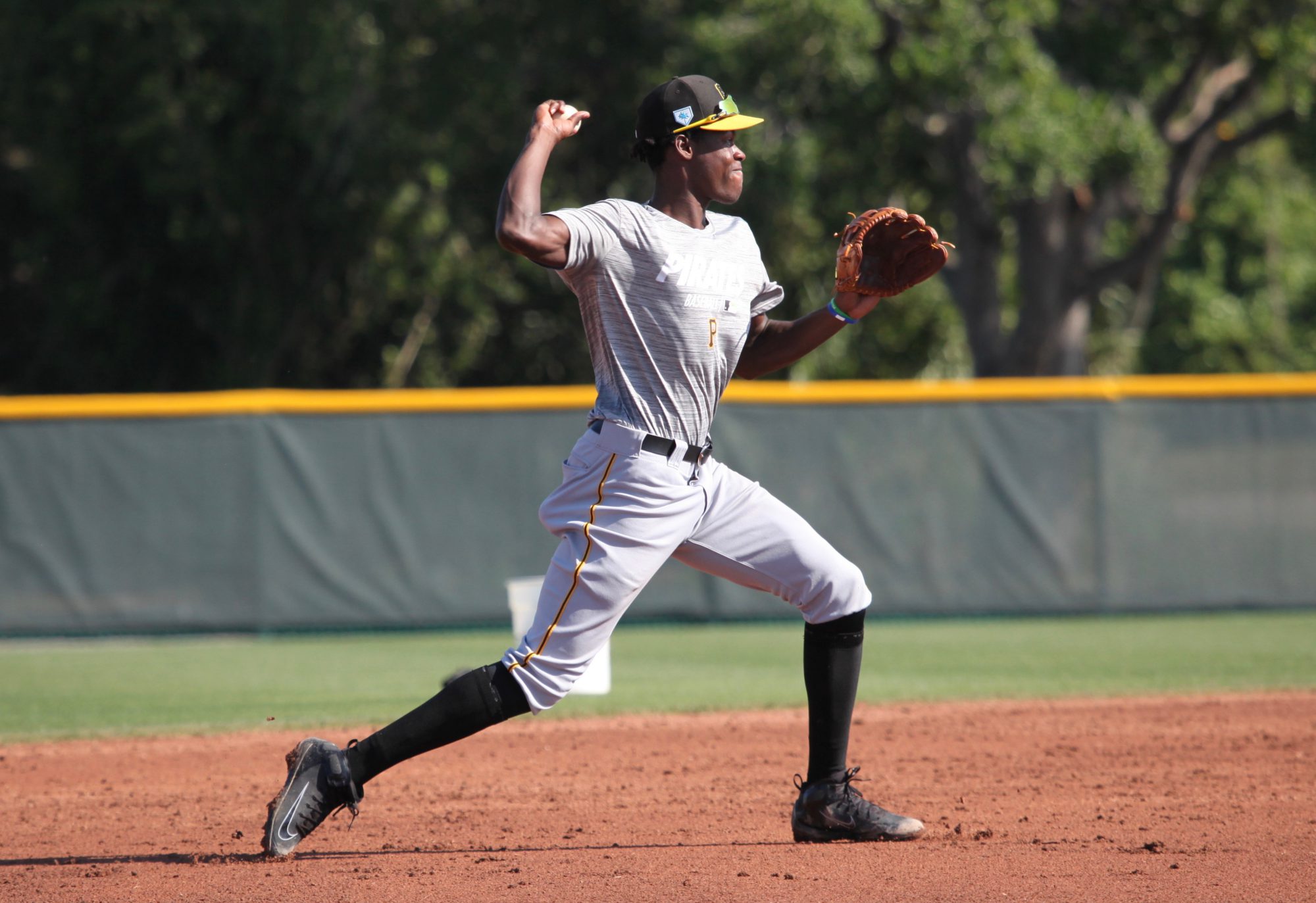 One of the strangest parts about writing for a prospect site is when players make it to the majors and then it’s treated like the first time that anyone has ever heard of them. Obviously we know that not everyone reads this site, but it’s still odd to see it happen when you’ve been talking about someone for years. While he didn’t make his Major League debut yet, you can see that same thing happening with Oneil Cruz recently. People are just finding out that he exists on this planet.

That partially due to the fact that there’s almost nothing to talk about in Spring Training so far, so seeing a 6’7″ shortstop is out of the ordinary. This has probably been the quietest first week of Spring Training that I can remember. I assume that’s partially due to the lack of interest in the Major League team right now. They didn’t bring in anyone exciting and their best player was traded away after a poor season. No one has high expectations going into the season. I’ve been sitting here most days looking for a reason to start a discussion thread for the news of the day and we haven’t posted one yet. That will change soon, because the games begin this week.

The Pittsburgh Pirates open their Spring Training schedule on Saturday afternoon at home against the Minnesota Twins. The first televised game is the following day against the Detroit Tigers, and then they only have two days without games before the ST finale on March 24th. Today is the first full squad workout, with 62 players in Major League camp this year and a group of minor league players who were brought in earlier than the rest to serve as backups during the early spring games.

We will have game discussion threads each day here, though they will obviously work better during the 16 games being televised live. There will at least be a radio feed for every game, some through MLB.com, plus you can follow along with the live boxscore if you’re at work and can’t watch/listen to the game, but you need something better to do. Here are the spring broadcast schedules in case you didn’t bookmark them already:

We will have some live coverage from Bradenton soon, though that will be more focused on the minor league side. Some guys set for the minors are already in camp and we will see them at the end of Spring Training games soon, but the rest of the full-season minor league players report within the next week. When those late inning replacements start coming off the bench wearing high numbers, I’m sure the readers here will know a little bit more about them than the average fans, where are just learning what an “Oneil Cruz” is. If not, feel free to keep our Player Pages section open during the games. That’s the most under-appreciated section of this site.

Back in the summer, I mentioned that Ke’Bryan Hayes had a fielding percentage that was bordering on a Major League record. That’s amazing for a minor league player to do. He’s playing at places that aren’t up to MLB standards in many ways, from the field, to lighting, to the players around him who prevent errors. I noted that the MLB record for fielding percentage was Tony Fernandez and that fact came with some stupid responses.

It was literally just a fact thrown out there and nothing else. Some idiots took it as a scouting report even though there was nothing more than a comparison in fielding percentage. Others came at me with better ways to measure fielding. Again, it was just a random fact, don’t read too much into it. Others took an opportunity to knock Tony Fernandez. Idiots, all of them. Reading comprehension was at an all-time low that day.

Fernandez was a great defensive player, but he was a shortstop who moved to third base, so basically the stat got diminished by the people who knew it was just a stat comparison. One that stood out was the sarcastic “when I think of great third basemen, immediately Tony Fernandez comes to mind”. As I said though, Fernandez was a great fielder and a fairly good hitter, even All-Star quality at some times. He set that .991% record in his first year at third base. In 1989, he set the single-season record for fielding percentage at shortstop. That mark was topped, but the third base record has stood. He had a career 45.3 WAR.

Fernandez passed away over the weekend at age 57. Take some time to watch this old highlight video of his career.

Five former Pittsburgh Pirates born on this date, plus two transactions of note.

On this date in 1884, the Alleghenys sold pitcher Bob Barr to the Washington Nationals, reportedly for $100. It’s listed as the first transaction with another Major League team in franchise history. Barr was 6-18, 4.38 in 203.1 innings as a rookie with the 1883 Alleghenys. He had a career 49-98 record in the majors, and even in his best season when he won 28 games in 1890, he still led the league with 24 losses. This date is sometimes listed as occurring on February 14th, but I was able to track down the official announcement, along with some interesting information on the deal.

On this date in 1912 the Pittsburgh Pirates traded outfielder Vin Campbell to the Boston Braves for outfielder Mike Donlin. Both players were great hitters, but neither were loyal to baseball. Campbell was a businessman and Donlin a vaudeville actor. Both would leave baseball for periods of time, or hold out for more money, because they knew they could make better money elsewhere. Donlin would’ve likely been a Hall of Fame player had he not sat out three full seasons in his prime. He was a .333 career hitter in 1,049 games. He batted .316 in 68 games in 1911, while Campbell had hit .312 in 42 games for the Pirates that same season. Both players would end up playing just one season for their new teams, then they both sat out the 1913 season. Donlin hit .316 in 77 games for the 1912 Pirates, while Campbell hit .296 and led the league in at-bats.

Dave Wissman, outfielder for the 1964 Pirates. He was signed by Pittsburgh as an amateur free agent prior to the 1961 season. Dave batted .333 with ten homers and 20 doubles in 70 games his first season. He moved up a level for 1962 and slumped, hitting .244 in 119 games for the Grand Forks Chiefs of the Northern League. Wissman moved up to Double-A in 1963 and hit .272 with 11 homers in 134 games. He followed that up with a .255 average and ten homers in 1964 in Triple-A, earning a September call-up to the Pirates. He played 16 games for the Pirates, and although didn’t get a start until game 159 on the season, the Pirates started him in left field twice and center field twice during the last four games of the year. While in the minors he spent most of his playing time at third base. Wissman played two more years in Triple-A for the Pirates, then one season in the Tigers system, before retiring. He hit at least ten homers in all six minor league seasons for the Pirates, but never more than 14 in a year.

Whammy Douglas, pitcher for the 1957 Pirates. The Pirates signed him as an amateur free agent in 1953 at 18 years old. By the next season he put up a 27-6 2.06 record pitching for the Brunswick Pirates, a D-Level affiliate of Pittsburgh. He made it all the way up to Double-A in 1955, but remained at the level the entire 1956 season. In Triple-A in 1957, he went 10-10, 2.71 in 20 starts and six relief appearances, earning a promotion to the majors in late July. For the Pirates he went 3-3, 3.26 in 11 games, eight as a starter. Back in Triple-A for 1958, he remained there for the Pirates until they traded him to the Reds on January 30, 1959 in a seven-player deal that saw them acquire Harvey Haddix, Smoky Burgess and Don Hoak. Douglas pitched for two seasons in the minors before retiring, briefly making a comeback in 1965 before ending his playing days for good.

Ed Brandt, pitcher for the 1937-38 Pirates. He had a rough start to his career with the Braves in 1928, leading the NL in losses as a rookie, then going on to compile a 21-45 record over his first three seasons. Brandt would turn things around in 1931 and run off a string of four consecutive seasons winning at least 16 games. After struggling in 1935, the Braves traded him to the Dodgers in December, then almost exactly one year later, the Dodgers shipped him to the Pirates. In two seasons in Pittsburgh he went 16-14, 3.23 in 57 games, 38 as a starter. His 11 wins for the 1937 Pirates ranked third on the team. The Pirates released him in 1939 during Spring Training. He played that season in the minors before retiring as a player. Brandt passed away at the age of 39 after he was hit by a car.

Eddie Phillips, catcher for the 1931 Pirates. He had a 20-year pro career beginning in 1924 when the Boston Braves signed him out of Boston College. Phillips played three games that year for the Braves, then it took him five more years to get back to the majors as a member of the Detroit Tigers. After one season in Detroit, he was back in the minors, where he was picked by the Philadelphia Athletics in the September 1930 Rule 5 draft. Four months later the Pirates purchased his contract. That 1931 season would end up being the best year of his career. He set personal highs in games played (106), hits (82), home runs (7) and RBI (44). Just over a year after acquiring him, the Pirates traded Phillips and a pitcher named Bob Osborn to the Kansas City Blues of the American Association in exchange for pitcher Bill Swift. The trade was a huge success for the Pirates, as Swift spent nine seasons pitching for Pittsburgh, picking up 91 wins along the way. Phillips spent parts of three more seasons in the majors and retired with a .237 average in 312 career games.

Rivington Bisland, shortstop who pinch-hit for the Pirates on September 13, 1912. He began his minor league career in 1910, and his one game for the Pirates was his Major League debut. He got his pinch-hit at-bat during a 6-5 win over the Phillies. Early the next season, the Pirates sold him to the Atlanta Crackers, where he played in each of the next three years (1913-15). Those first two years after leaving the Pirates, he got brief trials with the 1913 St Louis Browns and 1914 Cleveland Naps (Indians). In 102 career major league ABs, he hit .118 with one extra base hit (a double).