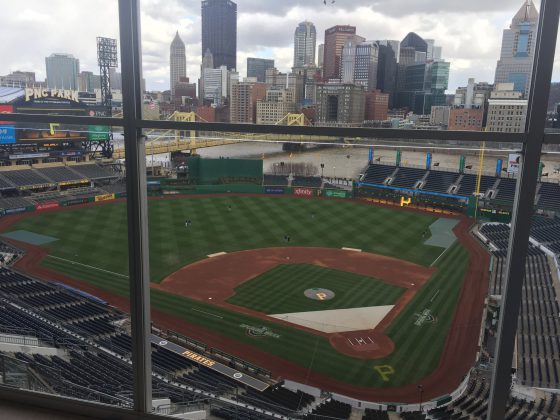 Baseball Prospectus released their PECOTA rankings today, which come with some changes to the system this year. You can check out those changes here.

Joe Musgrove was listed as one of ten pitchers on the rise. Tyler Glasnow and Austin Meadows were on the lists for players who might disappoint. Kevin Newman was on that list as well, due to his MLB results being better than his minor league track record.

Check out the rankings above and feel free to discuss anything that stands out to you in the comments.

Just this on loop all day today.

Six former Pittsburgh Pirates born on this date and five of them were significant contributors.

Richie Zisk, outfielder for the 1971-76 Pirates. He was a third round draft pick of the Pirates out of high school in 1967. Zisk spent six seasons in the minors, hitting .300 with 129 homers before earning an Opening Day job in the majors. He played 24 games with the Pirates between the 1971-72 seasons. In 1973 he was the everyday right fielder for the last two months of the season. He played 103 games that year, hitting .324 with 54 RBIs and finishing ninth in the Rookie of the Year voting. The 1974 season would see him finish ninth in the MVP voting, as he drove in 100 runs with a .313 batting average, the sixth highest total in the NL. He hit .290 with 20 homers and 75 RBIs in 1975, helping the Pirates to the playoffs for the second straight year. They would lose both years in the NLCS, but Zisk hit a combined .400, in what would end up being the only playoffs of his 13-year career.

In 1976, he set career highs with 91 runs and 35 doubles. He hit 21 homers (his high while with the Pirates) and drove in 89 runs. With Omar Moreno establishing himself and one season left before he hit free agency, plus a need for pitching help, the Pirates traded Zisk to the White Sox for Goose Gossage and Terry Forster on December 10, 1976. Zisk went on to hit 30 homers and drive in 101 runs in his only year in Chicago, making the All-Star team for the first time. He signed a five -ear deal with the Texas Rangers, playing three seasons of that deal before he was traded to the Mariners, where he finished his career in 1983. He was a career .287 hitter with 792 RBIs in 1,453 games.

Bill Koski, pitcher for the 1951 Pirates. He was rushed to the majors as a 19-year-old after just ten lower level minor league games in 1950. He began the 1951 season on the Pirates Opening Day roster and started his career with a three no-hit innings in relief during his first appearance. That earned him a start a week later as he picked up his only career decision in a loss to the Giants. Koski was with the Pirates through early June before returning to the minors. He came back up in September and had two more relief outings. That would turn out to be his only season in the majors. He struggled with his control during his brief big league time, walking 28 batters in 27 innings with just six strikeouts. Koski spent 1952 in the minors, then served in the Korean War before returning to minor league baseball for four more seasons.

Dale Long, first baseman for the 1951 and 1955-57 Pirates. He was in the minors for seven seasons before he got his first chance at the majors for the Pirates in 1951. He was taken in the December 1950 rule 5 draft, and the Pirates were his fifth organization. He played just ten games before he was put on waivers, where he was picked up by the St Louis Browns. He lasted 34 games there before being released. Long would spend the next three seasons in the minors, re-signing with the Pirates in 1953. In 1955 they gave him his second chance with the team and he excelled. He hit .291 in 131 games, with 79 RBIs and he led the NL with 13 triples. Long made his only All-Star appearance in 1956 when he slugged 27 homers and drove in 91 runs. From May 19- May 28 he homered in eight straight games, setting a still standing (since tied) record for consecutive games with a home run. In early 1957 he was traded to the Chicago Cubs in a four-player deal. Long finished his career in 1963 with a .267 average and 132 homers in 1,013 games.

Glenn Wright, shortstop for the Pirates from 1924 until 1928. He had played three seasons of minor league ball before the Pirates purchased his contract from the Kansas City Blues of the American Association. Wright had an outstanding rookie season in 1924, finishing third in the NL with 111 RBIs, third with 18 triples, and he led the league with 616 at-bats. He also set a record for assists by a shortstop with 601, a total that has been topped only once since (Ozzie Smith in 1980). Wright would finish 11th in the NL MVP voting that season. His second season was even better than his first. He hit .308 and drove in 121 runs while scoring a career high 97 runs. He collected 60 extra base hits, led NL shortstops again in assists and this time finished fourth in the NL MVP voting. The Pirates went to the World Series that year and Wright struggled with a .185 average, but the Pirates still took the series in seven games. On May 7, 1925, he turned an unassisted triple play, just the sixth in MLB history at the time.

In 1926, Wright played just 119 games, missing some time in August after suffering an injury during a clubhouse scuffle. Prior to the injury he was hitting .324, but upon returning three weeks later, his average dropped down below .300, only coming back to .308 by going 6-for-8 in the last two games of the season. Healthy for the 1927 season, he hit .281 and drove in 105 runs, topping the century mark in RBIs for a third time in four years. He led all NL shortstops in games played, putouts and also errors. The Pirates made the World Series again and again Wright had his postseason troubles, hitting .154 as the Pirates lost in four games. He played just 108 games in 1928, missing some time with off-field problems and he was now in the manager’s doghouse. After the season, the Pirates traded him to the Brooklyn Dodgers in exchange for pitcher Jesse Petty and a backup infielder named Harry Riconda. Wright would be injured almost all of 1929, come back in 1930 to hit .321 with 22 homers and 126 RBIs, before injuring his leg. That injury would effectively end his days as a star shortstop. He was a career .294 hitter with 723 RBIs in 1,119 games.