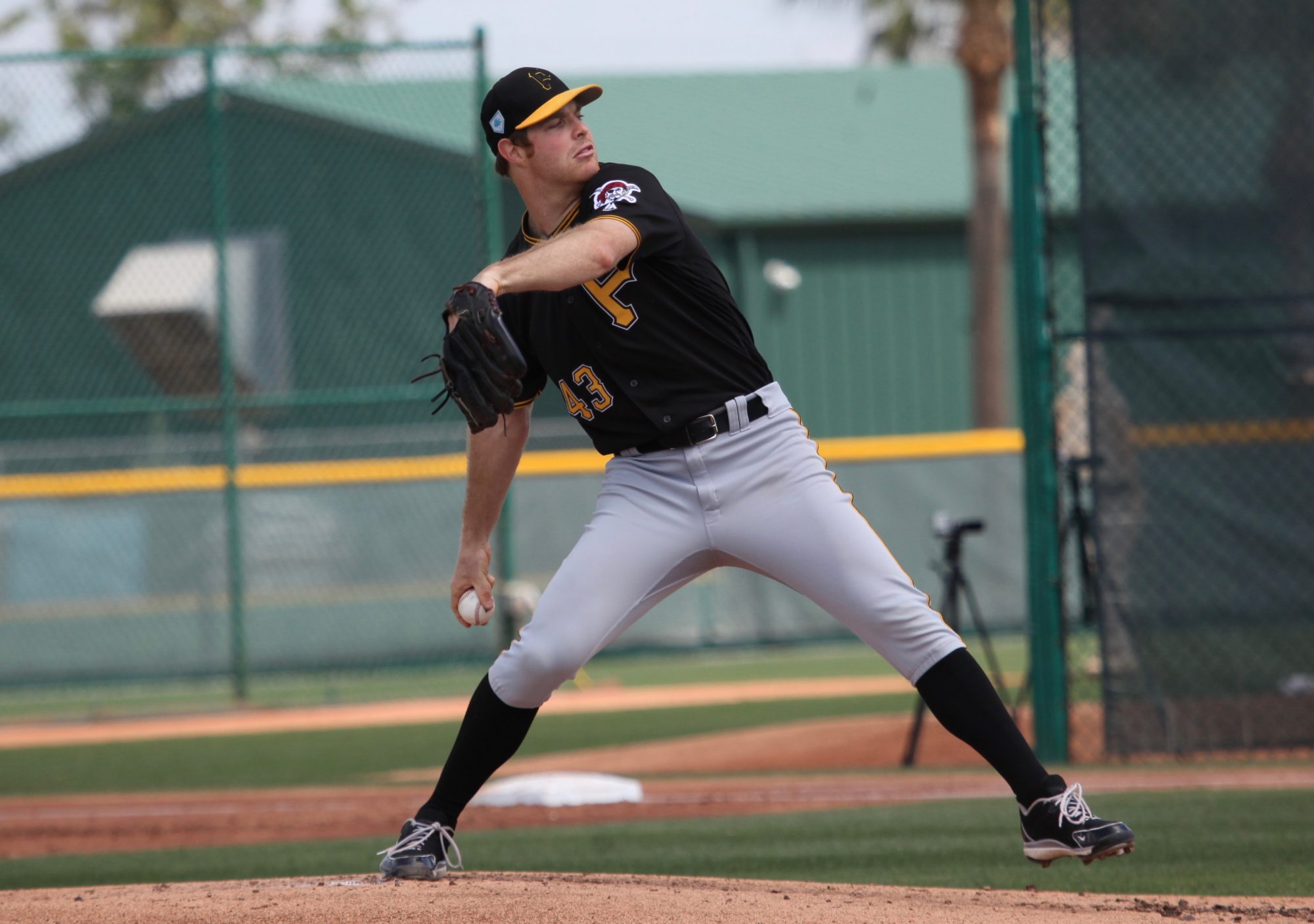 The Pirates’ obsession in recent years with having their pitchers throw mostly fastballs has been well documented.  The sharply increased success of Gerrit Cole and Charlie Morton as soon as they left the team and sharply reduced their fastball use certainly drew some attention.  But that’s all clearly changing.

The Pirates’ purpose, of course, was to eschew strikeouts for groundballs.  Whether or not it resulted from their reliance on fastballs, they ranked 13th in the NL in strikeouts per nine innings, at 7.9, in 2017, and 10th in 2018 at 8.6.  So far this year they’re fourth, at 9.5.  (Admittedly, some of that may have to do with playing six of their eight games against the Reds.)

The reliance on fastballs certainly extended to the Pirates’ farm system, although in this case I can offer only anecdotal evidence.  I’ve seen a lot of minor league games and the established pattern, at least up through AA, was for Pirates’ starters to use fastballs exclusively, or nearly so, the first time through the lineup, if not longer.  Many times, I’d see a pitcher throw 10-15 straight pitches with no more than one mph or so variance in velocity.  Ray “Work Fast and Change Speeds” Miller would have been appalled.

It’s hard to link this directly to fastball usage, but strikeouts haven’t been a big part of the arsenal of the team’s minor league staffs in recent years.  To take 2018 as an example, here’s the league rank of each affiliate in K/9

Given the changes at the major league level, you have to think that there will be some in the farm system, too, and there’ve been some possible early signs of that happening.  It’s again hard to link this directly to fastball usage, but some starters with low K rates in the past have had interesting first starts.  On Sunday, for instance, Eduardo Vera, who had a K/9 last year of just 5.7, fanned six in six innings for Indianapolis.  Max Kranick, whose K/9 last year was a healthy 8.9, fanned seven in just four innings in his debut for Bradenton.  Earlier, Alex McRae, who had an 8.0 K/9 last year, fanned seven in four and two-thirds.  James Marvel fanned just 6.6 per nine last year, but struck out nine in just six innings in his first start.

Then again, maybe nothing is changing.  Team-wide results are very different from what some of the individual starters did.  Altoona, Bradenton and Greensboro all rank last in their leagues in K/9.  Indianapolis is fourth.

Of course, these are all very small sample sizes.  It’s something that bears watching over the course of the season.

Today’s Starter and Notes: The Pittsburgh Pirates lost 10-0 to the Chicago Cubs on Monday afternoon. Jordan Lyles will make his second start of the season tomorrow after an off day today. He threw five shutout innings in his season debut. The Cubs will counter with Yu Darvish, who has an 8.10 ERA and a 2.70 WHIP in 6.2 innings over two starts.

The minor league schedule includes the season debut of Braeden Ogle, who was supposed to pitch on Monday, but his start was rained out. Greensboro has a doubleheader today. James Marvel gets his second start, coming off of six shutout innings on one hit, no walks and nine strikeouts. Indianapolis doesn’t have a starter listed, but it should be Rookie Davis, who still needs to be added to the active roster.

From Altoona’s game on Sunday, here’s Logan Hill with the go ahead RBI

Logan Hill doubles home @axxtionjaxxn as we take a 3-2 lead in the eighth pic.twitter.com/IeYIUKVCHE

And prior to the Hill hit, Altoona cuts down a runner at the plate to keep it a 2-2 game

Like the rest of the roads here, this one is also closed.

Owen cuts down the run at home and Jake Brentz gets a strikeout to halt the 'Ducks threat in the sixth.

On this date in 1930, the Pittsburgh Pirates traded Hall of Fame pitcher Burleigh Grimes to the Boston Braves for pitcher Percy Jones and cash. This trade didn’t work out well for the Pirates, who failed to get a single win out of Jones, while Grimes won 33 games over the next two seasons. Grimes would end up coming back to the Pirates to finish his career in 1934.

The only former player born on this date, pitcher Claude Passeau, is one that got away from the Pirates. After using him for one game in 1935 (his MLB debut), the Pirates traded him to the Phillies. Passeau ended up winning 162 games in his career. The Pirates got catcher Al Todd in return for Passeau and he had three strong seasons in Pittsburgh, but they also threw in catcher Earl Grace, who was a capable backup for two seasons. They won the catcher part of the deal, but lost out big with the pitcher.

The first time the Pirates ever played on April 9th might surprise you, considering how many years they were around prior to that season. In the early years of baseball, the season began much later, with games opening up in early May at one point. It wasn’t until 1959, that the Pirates opened a season before April 11th. That year, they opened up on the road at Crosley Field, dropping a 4-1 decision to the Reds. You can see the boxscore here. Roberto Clemente drove in the only run for the Pirates.

Also on this date in 2001, the Pirates opened up PNC Park on a somber note, as Willie Stargell passed away that same day. The Pirates lost 8-2 to the Reds in front of 36,954 fans.