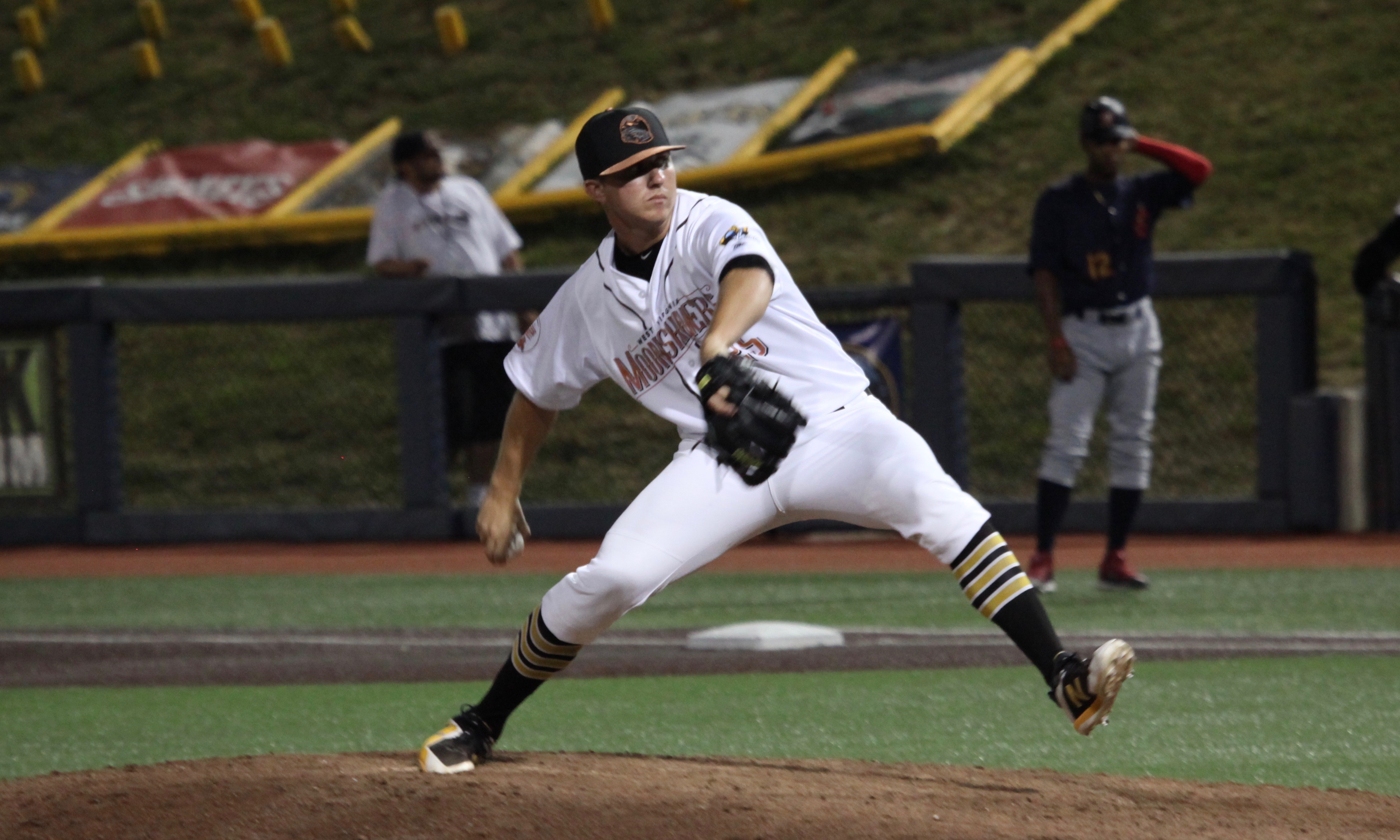 The Pittsburgh Pirates drafted right-handed pitcher Conner Loeprich out of St Mary’s in the 20th round of the 2018 amateur draft. He put up solid stats for Morgantown in his pro debut and Baseball America recently credited him with one of the best breaking balls among the 16 pitchers drafted and signed by the Pirates this year. Despite the success, he mostly flew under the radar during his first year in the system.

Loeprich attended Buchanan High School in Clovis, California, where he was a top pitcher in baseball, and he played football during his last two years. He played defense as a junior and took over as the quarterback as a senior. Loeprich had a love for football, and his career may have gone down a different path if he started with the sport earlier.

“I put a lot more work into baseball,” Loeprich said. “However, I did love football and if I had a little more success with football earlier in high-school, I think that could have been something I focused more on.”

He stuck with baseball though, recognizing that he was better at the sport and it would present him with a much more promising career. He didn’t get much attention from pro scouts in high school and the one time he did, the timing was all wrong. That bad timing turned out to be good luck for the Pirates.

“I remember the Cubs called me and asked to see me throw a bullpen my junior summer,” Loeprich said. “But I had been shut down at that point. Other than that there was no draft interest at all.”

Loeprich had the goal to go pro as soon as possible, so there is a chance that if the Cubs saw him pitch that day, he may have ended up signing with them out of high school. He ended up attending St Mary’s College of California, where his slow start as a freshman didn’t diminish his dreams of being drafted.

During that freshman season of college in 2016, Loeprich saw four of his teammates get drafted. That group included Corbin Burnes, who made his big league debut with the Milwaukee Brewers in 2018. Loeprich was the youngest pitcher on the staff and he was used sparingly, making three relief appearances, while throwing a total of two innings.

During his sophomore year, his workload increased drastically. He made six starts and ten relief appearances, posting a 4.15 ERA in 52 innings, with a 1.19 WHIP and 36 strikeouts. The ERA might not sound impressive, but the team ERA was 4.48 that year and his team’s offense averaged more than six runs per game, so it was a high offense environment.

Loeprich started receiving attention from scouts during the winter following his sophomore year. The Pittsburgh Pirates first contacted him this January and other teams also began watching at that time according to his coaches. The Pirates were also the first team to meet him in person. They had high interest from the start of this year and there is no doubt that he fits their draft mold.

It’s been almost a running joke during draft time that you just need to find a 6’3″ right-handed pitcher and the Pirates will have interest in drafting him. Loeprich is an athletic player, who stands 6’3″, 220 pounds (he’s mistakenly listed at 185, but hasn’t weighed that since his freshman year). He fits even better than just the body type though.

Loeprich has always liked to work down in the zone, which has led to him being a heavy ground ball pitcher throughout the years. If you’ve followed our site for any amount of time, you know that the Pirates like ground ball pitchers and they got a nice one with their 20th round pick this year.

Not only is Loeprich a heavy ground ball pitcher, he also has that breaking ball that got him attention and it led to a strong strikeout rate during his first year in pro ball. His junior season at St Mary’s didn’t really stand out, but it was the scouting report that got him drafted. After signing for a $65,000 bonus a week after being drafted, he made his pro debut six days later and instantly showed success in a much more pitcher-friendly environment with Morgantown.

After posting a 4.78 ERA in 32 innings at St Mary’s this year, Loeprich posted a 2.83 ERA over 28.2 innings in the New York-Penn League. He made five starts as a junior, but after the draft, the Pirates used him strictly in relief. They capped him at two innings per appearance and he was effective in that role. Loeprich had 9.73 SO/9IP rate, with a .178 BAA and a very impressive 2.53 GO/AO ratio. The walk total was a little high (14), but he is by no means a wild pitcher.

Loeprich throws a cut fastball that gets into the low-90s as his main pitch. He also has a curve, a sharp slider and a changeup. The curve is the pitch that got him recognition from Baseball America. Watching over a few of his appearances with Morgantown as preparation for this article, I’d say it was an excellent choice by them. His curve was obviously hard for batters to pick up because it froze a lot of them. They appeared to think it was a high fastball out of his hand, only to be rung up on a called strike when it dropped into the zone. He used the pitch often, though it rarely got swings.

The cutter/curve combo is a nice two-pitch mix for a reliever, but for now Loeprich is sticking with four pitches and plans to work on his changeup this off-season.

“My changeup has been the pitch I’m really trying to focus on this off-season and hope to see a lot of improvement on next season,” Loeprich said. “I didn’t throw it often, but it still was effective against left-handed hitters.”

Following the season, Loeprich attended the Fall Instructional League. It was a little different than in the recent past. The drafted players were there for the rookie camp, which is more workout oriented and includes team building exercises, rather than getting more game action for the new players. Loeprich considered it a learning experience and gave him a chance to get to know more players and coaches in the system.

“Instructs was awesome,” Loeprich said. “It really brought me closer to the guys I played with and allowed me to meet all the guys from my draft class that I hadn’t played with. Also getting to know the coordinators and front office staff before Spring Training starts is nice.”

Unlike some of the other draft picks, Loeprich did get some baseball activities in during his time at the rookie camp.

“I threw a few bullpens with our pitching coordinator and was able to get some feedback going into the off-season on what to start focusing on for next year.”

Loeprich has some things going for him that you don’t often see for players drafted as juniors out of college. Playing two sports in high school means that all of his time wasn’t focused on baseball. He was barely used during his freshman season at college, and he was young for his draft class this year. Loeprich turned 21 back on September 13th, which made him younger than draft-eligible sophomore players. Those things combined make it possible that he has a lot more to show on the mound as he continues to grow as a player.

We will see if the Pirates decide to challenge him with a push to Bradenton, or he ends up with their new Low-A affiliate in Greensboro to start the season. The stats and combo of pitches suggests that he could be ready for the jump, but there will also be a lot of competition for Bradenton bullpen spots. Loeprich is headed to Bradenton today for a winter mini-camp with some other draft picks, but he’s already looking forward to getting back there in February or early March.

“I am excited to get back out to Pirate City and can’t wait to go to my first Spring Training to see where my next destination is in the system.”

With late round picks out of college, you look for tools, such as a plus fastball or power, but you rarely find a polished pitcher with upside. Usually those tools come with issues that held the player back, such as poor control or high strikeouts for hitters. Loeprich has a four-pitch combo, with a plus strikeout pitch and success against both right-handed and left-handed hitters. He also has a solid pitching frame with some projection. He still has things to work on, such as throwing more strikes and improving his changeup, but he appears to be on a solid path already, which is quite a leap from where he was just two years ago as a seldom-used freshman in college with pro baseball dreams.