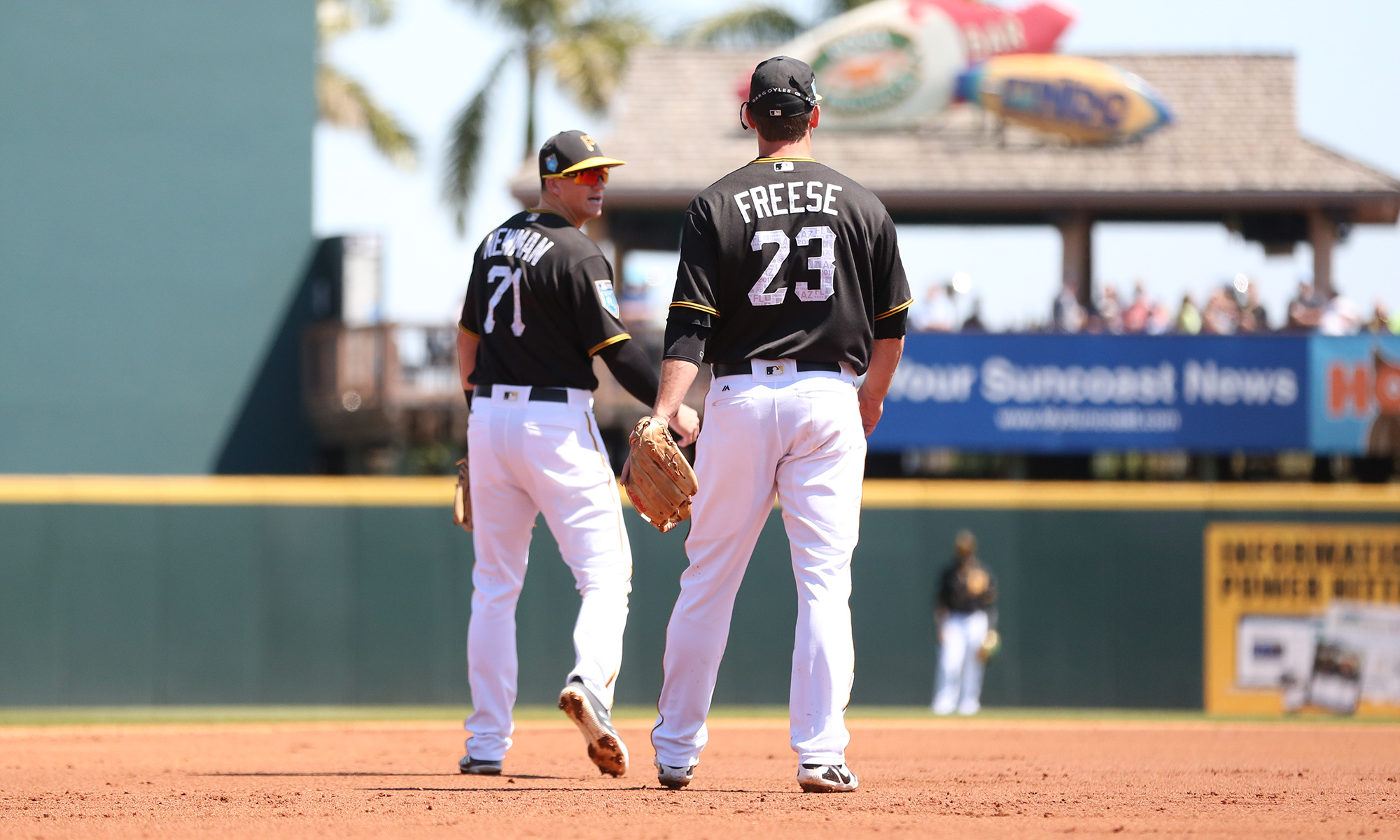 The Pirates traded David Freese and Adeiny Hechavarria away last night, sending Freese to the Dodgers and Hechavarria to the Yankees. The return wasn’t big for either deal. Freese brought back Jesus Valdez, a first-year DSL player, while Hechavarria brought back a player to be named or cash considerations.

On the salary side, the Pirates saved about $1.2 M between this year and next year, with almost all of that coming from the savings from dealing Freese. That move makes it apparent that they weren’t going to pick up the option next year for Freese, and were trying to get something in return for him now and trying to save some money.

But there’s one immediate impact to these deals, along with the DFA of Sean Rodriguez two days earlier: it clears space for the young players.

Kevin Newman has been in the majors, and should be in line for additional starts down the stretch. But I wouldn’t be surprised if Kevin Kramer gets the call to the majors this month and gets starts as a result of these moves.

Giving playing time to Newman and Kramer this month could allow the Pirates to make a decision on their middle infield combo for next year. Those two are the best internal options right now for the starting middle infield jobs, assuming they don’t pick up Josh Harrison’s $10.5 M option. They won’t have a lot of time to show what they can do in the majors, but with Freese, Rodriguez, and Hechavarria gone, there are now three fewer veterans to play during the month of September.

The recent trades will also impact the bench for next year, with the Pirates now needing options to replace Freese and Rodriguez for the entire season, and their backup shortstop position being open if they go with Newman as the starter. Those decisions won’t be clear right away, and could be impacted by how things play out down the stretch.

The Pirates aren’t contending this year. They still have a month left to play. And now they are set up well to play the younger guys in September and start building toward the 2019 season.

The Pirates are in fourth place in their division, trailing by 13.5 games with 27 games left on the schedule. They trail the second wild card team by 9.5 games.

Indianapolis is a game out of first place with three games left in their schedule. They do not own the tiebreaker. They are a game back in the wild card race, with another team a 1/2 game back.

Altoona is in first place with a one game lead and three games left in their schedule. They clinched a playoff spot on Sunday.

West Virginia has three games left in their schedule. They are tied for second place in the overall standings and would make the playoffs if they finish second, because Lakewood won both half titles. The Power have a better winning percentage due to Kannapolis (the team they’re tied with) playing four more games, so with just three games left, the two teams can not finish for a tie anymore. Kannapolis held the tie-breaker due to winning the season series.

Today’s Starter and Notes: The Pittsburgh Pirates won 3-2 over the Atlanta Braves on Friday night. Chris Archer will get the start, coming off of his outing on August 26th when he gave up six runs over four innings against the Milwaukee Brewers. The Braves will counter with right-hander Kevin Gausman, who has a 3.87 ERA in 156 innings, with 126 strikeouts and a 1.28 WHIP. He threw eight shutout innings against the Pirates on August 21st.

The minor league schedule includes just five teams and three regular season days still remaining. Only two starters are listed for the five teams, but three of the games have playoff implications still (see Playoff Push above). Altoona has Eduardo Vera on the mound tonight. He won the Eastern League Pitcher of the Week award and was named as our Player of the Week after allowing one run over 14.2 innings last week. Ike Schlabach goes for West Virginia in his tenth start of the season. He has a 3.35 ERA as a starter and a 4.31 ERA in 19 relief appearances. The seasons have ended for Bristol, the GCL and DSL Pirates.

From Morgantown, Brett Kinneman triples for the second day in a row as part of back-to-back three-hit days.

Five former Pittsburgh Pirates players born on this date, including the son of a Pirates great.

Jim Hopper, 1946 pitcher. Was managed by HOF pitcher Burleigh Grimes when the Pirates signed him out of the minors. Grimes played for the Pirates three different times, and said that Hopper was the best young player the Pirates had. Unfortunately, before he played a game for the team, he was called into active duty for the war. The Pirates signed him thinking he wouldn’t go to war because he had two young kids at home. Hopper missed two full years before returning in 1946. He started the fifth game of the season, then pitched again a month later, in what ended up being his last big league appearance.

Sam Brenegan, played one inning on April 24,1914. If he played in this era, he would be one of the most hated Pirates. Brenegan made his Major League debut in the sixth inning of a game the Pirates were losing to the Cardinals. Manager Fred Clarke decided to give starting catcher George Gibson a rest, sending Brenegan in to catch. Two batters into the inning, he committed a passed ball and walked after the ball behind him, which immediately irritated Clarke. A couple of pitches later, a wild pitch hit his finger and he walked after the ball again. Instead of going back behind the plate, he walked to the bench and sat down. That was his entire big league career.

On this date in 1890, the Pirates/Alleghenys lost all three games of a tripleheader to Brooklyn. It is one of three tripleheaders in Major League history. Pittsburgh lost 10-9 in the opener, 3-2 in the middle game and 8-4 in the last game. Only 915 paying customers showed up and the games took a total of four hours and 48 minutes to play.