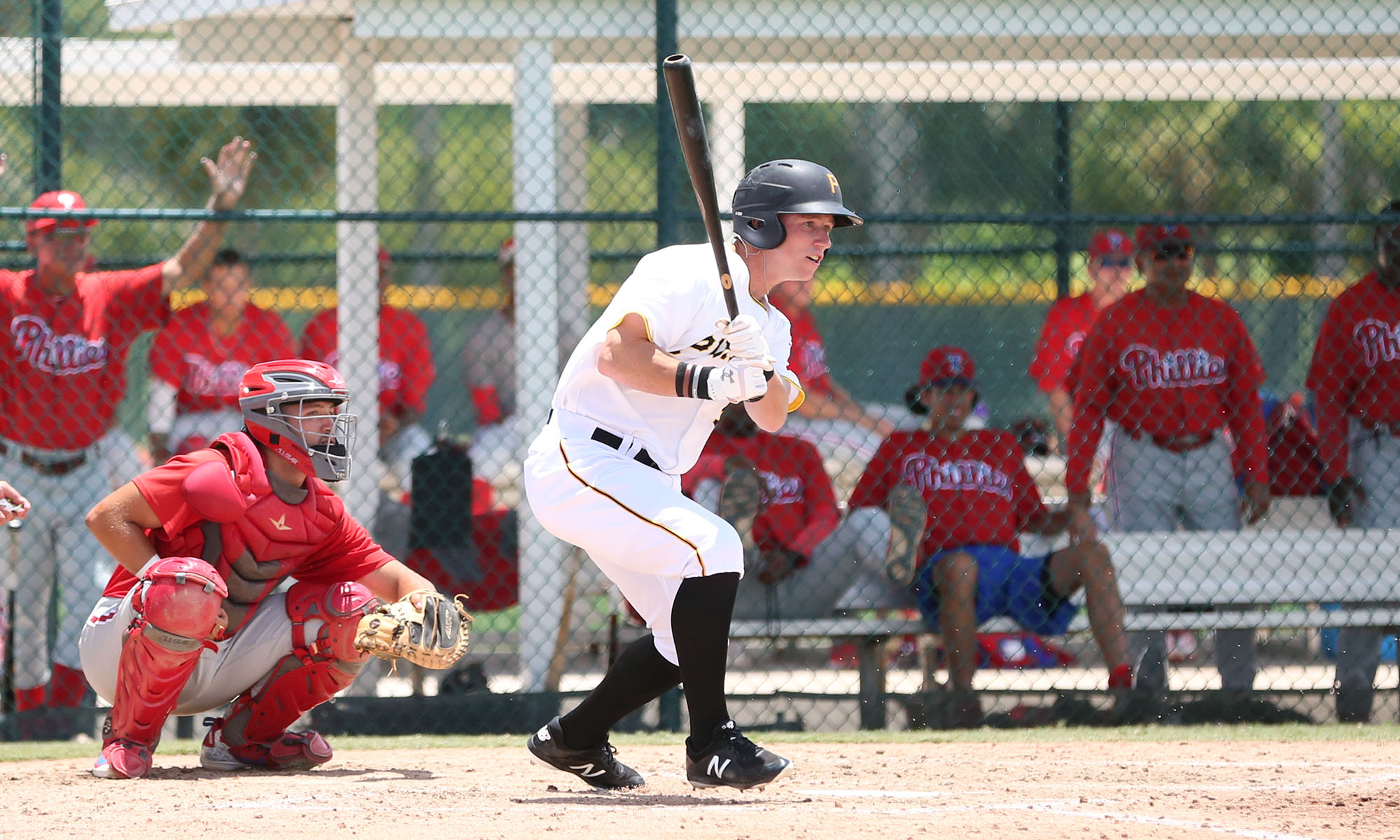 Damien Magnifico got the spot start in place of Nick Kingham, who was recalled by the Pirates. He didn’t last long on his limited pitch count, allowing two runs on three hits and two walks in two innings. Alex McRae took over in the third and tossed four shutout innings. Michael Feliz made his second scoreless appearance since being demoted, retiring the side in the seventh. Buddy Boshers gave up two runs in the eighth for the loss.

Eric Wood hit his tenth home run of the season in the third inning to get the scoring started for Indianapolis. Jose Osuna tied the score in the sixth with a sacrifice fly. Pablo Reyes hit his 19th double, walked and scored a run.

James Marvel got the start in game one of a doubleheader and he went the distance, allowing two runs on six hits and two walks, striking out four batters in seven innings of work. It’s his third complete game of the season, all of them coming during doubleheaders. Marvel has a 2.33 ERA in 27 innings over four starts with the Curve.

On offense, Logan Hill went 1-for-3 and drove in three runs, while Jin-De Jhang was 2-for-4 with two RBIs. Bryan Reynolds had two singles, a walk, an RBI and three runs scored. Cole Tucker had two singles, two runs scored, a walk and his 32nd stolen base. Jordan George was the only player in the lineup who didn’t have at least one hit, but he walked and picked up an RBI.

In game two, Scooter Hightower got the start a pitched great, throwing six shutout innings on two hits, with no walks and five strikeouts. He threw just 69 pitches, with 48 going for strikes. Matt Eckelman worked a quick seventh for his tenth save, as Altoona swept the doubleheader with a 3-0 victory.

The Curve got RBIs from Will Craig (his 98th), Logan Hill (his 70th) and Scooter Hightower, who picked up his first hit in pro ball. Bryan Reynolds went 3-for-3 with three singles. Cole Tucker hit his 20th double. Alfredo Reyes stole his 11th base for Altoona. He is now 38-for-41 in steals this year.

Bradenton had both games of a doubleheader rained out. The first game was canceled, while they will try to play a doubleheader tomorrow during the last meeting between the two clubs

Samuel Reyes got the start in place of the injured Travis MacGregor. It was the first career start for Reyes, who did well until they tried to extend him to six innings for the first time in his career. Reyes allowed just an unearned run over the first five innings. In the sixth, the first five batters all reached base against, which ended his night. Four of those five runners would end up scoring. Joe Cesar followed with three shutout innings, then an unearned run scored off of John Pomeroy in the ninth. He hasn’t allowed an earned run since July 18th.

Deon Stafford hit his tenth home run of the season. He also singled, walked twice and scored three runs. Travis Swaggerty had just a single in five at-bats, but it was a two-run single with two outs. Connor Kaiser has his average up to .355 after two hits and an RBI tonight. Rafelin Lorenzo had three singles and two runs scored. Lolo Sanchez was 1-for-3 with a walk and an RBI. He’s hitting .339 in 18 games this month.

Nicholas Economos got the start, trying to build off of a recent string of success. He had a rough night on Saturday, going 4.1 innings, with three runs on nine hits and a walk, with one strikeout. He had 24 strikeouts over his previous 17 innings. Francis Del Orbe followed and he allowed three runs in 3.2 innings, though only one run was earned. Conner Loeprich came on for the save in the ninth and loaded the bases with one out, but still preserved the one-run lead.

Brett Kinneman had the biggest hit of the night, smacking a three-run homer (his third home run) with two outs in the ninth to give the Black Bears a 7-6 lead. He hit his 13th double earlier in the game. Mike Gretler hit his first pro home run and Daniel Amaral hit his fifth homer. Both Amaral and Kinneman picked up outfield assists. Gretler reached base all four times up, adding a single, walk and hit-by-pitch.

Roger Santana got the start after going seven shutout innings with eight strikeouts in his last outing. He got hit hard early in this one, surrendering four runs in the second inning. Santana went five innings total, with six runs on six hits and one walk, with three strikeouts. Luis Nova followed with two scoreless frames, then Yery De Los Santos allowed one run in his two innings, while striking out five batters.

Chase Lambert hit a two-run single and drove in another run on an RBI ground out. He also stole his sixth base. Victor Ngoepe had a double, walk, his seventh stolen base and two runs scored. Gabriel Brito had two singles, a walk and two runs scored. Jeremias Portorreal had a single, his first double and an RBI. Mason Martin went 0-for-5 with five strikeouts.

The GCL Pirates lost 4-3 in their final game of the season. They finished with a 27-25 record.

Braxton Ashcraft made his fifth start and went five innings for the first time. He gave up two runs on four hits and a walk, with two strikeouts. In 17.2 innings, he had a 4.58 ERA, with a 1.19 WHIP and 12 strikeouts. Wilmer Contreras finished his season off with four shutout innings. He ended with a 4.22 ERA in 32 innings. We got strong reports on him at the end of Extended Spring Training. That ERA doesn’t match what we expected, but if you took out his worst outing, he had a 2.51 ERA in his other 13 appearances. Saul de la Cruz had the tenth and 11th innings, allowing an unearned run in each frame for the loss.

Ji-Hwan Bae went 1-for-3 with two walks. He finished the season with a .271/.362/.349 slash line in 35 games. Fernando Villegas went 2-for-3 with an RBI, a run scored and his fourth stolen base. Jack Herman finished 0-for-3 with two walks. He had the third best average in the league and the fifth best OPS (.924), finishing second on the team behind Pat Dorrian. Kyle Mottice (pictured up top) finished with a .472 OBP to lead the league. It’s the highest OBP in the GCL since Justin Morneau put up a .478 mark in 2000.

The DSL Pirates1 lost 2-1 to the Cubs1 in their final game of the season. They finished with a 32-40 record.

Starlyn Reynoso got the start and went five innings, allowing one run on five hits and a walk, with three strikeouts. When he faced the Cubs1 two weeks ago, he had his worst outing of the season, allowing five runs in 2.2 innings. Jordy Ortega allowed one run in his two innings and Bryan Torres finished things off with two shutout frames.

Bladimir Susana, who finished with a .179 average (all singles), had his first three-hit game. In fact, it was just his second multi-hit game. Ruben Gonzalez drove in the only run, but he was released after the game. Germin Lopez had two hits and stole his 15th base. Yoyner Fajado picked up his 17th steal. Juan Pie struck out in his lone at-bat. He finished with a .258/.382/.421 slash line in 58 games.

The DSL Pirates2 lost 5-2 to Colorado in the final game of the season. They finished with a 27-45 record.

The offense had four hits, with three of them going for doubles. Ronaldo Paulino hit his ninth double and walked, but he was released after they game, along with numerous other players (we will have the full list soon). Yeison Ceballo and Timsaimy Melfor each had RBI doubles. Angel Basabe popped out as a pinch-hitting, giving him a .260/.341/.414 slash line in 50 games.