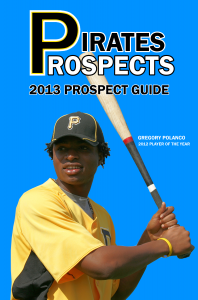 The 2013 MLB Draft is one week away, and is always one of the biggest events on the site. To celebrate, we’re offering the 2013 Pirates Prospects books at a discount with our MLB Draft sale. By using the code “2013DRAFT”, you can get the 2013 books for $13 each, which is a savings of $8 per book. You can order the books on the products page of the site.

The 2013 Prospect Guide features our pre-season top 50 prospects, as well as profiles on every player in the system. The pre-season rankings in the book featured Tyler Glasnow as the number eight prospect in the system, which was higher than most outlets had the breakout right-hander. It also featured top performing 2013 prospects like Dilson Herrera (12th), Phil Irwin (23rd), Max Moroff (24th), Casey Sadler (32nd), Eric Wood (39th), and Joely Rodriguez (40th) ranked as sleepers in the system. Even though the reports were written in the pre-season, the book is still relevant. I designed the book to be used as a reference for myself when covering games and writing articles, and I still use it daily when writing articles on the site.

The 2013 Annual looks at the Pittsburgh Pirates, with profiles on every player on the major league roster, as well as guys who were non-roster invitees during Spring Training and have helped the major league squad so far. The book was co-written by myself and Matt Bandi, and features Matt’s projections for the 2013 season. Here is how a few of those predictions have played out so far:

The Annual also features Pitch F/X analysis and analysis on the Pirates holding runners on, and the impact that Russell Martin can have, which we’ve already seen this year. The Annual has a limited supply remaining.

The books are not only a great reference on every level of the Pirates system, but they also help to support the site. It’s because of the books that we’ve been able to provide so many updates over the last few years, while adding writers to provide insight from Pittsburgh and all of the minor league affiliates. I roll about 80% of the book sales back into the site to pay writers and expand the coverage. The other 20% goes to extremely unhealthy food that will probably stop my heart by the age of 40. And a small percentage will probably go toward new running shoes to make sure the previous statement doesn’t happen.

Go to the Products Page of the site to order your books, and use the code “2013DRAFT” to get your discount of $8 per book. The sale runs through June 13th. Note: The discount does not apply to the eBooks. However, there is a discount code for the eBooks that is active for the next two days and saves you 20%.