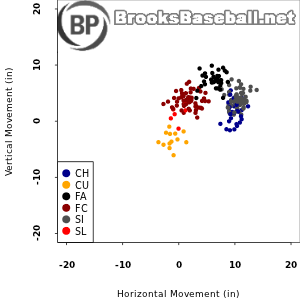 Rusin is a soft-tossing lefty making only his fourth start in the big leagues. He has a limited amount of PITCHf/x data available, and I struggled to find scouting reports on him. The southpaw has a bit of a funky arm action during his delivery, which can be deceptive on opposing hitters. His fastball sits around 88-90 MPH, and his two-seamer shows off some solid arm-side run. He also throws an 85-88 MPH cutter. Rusin appears to throw two breaking balls, a low 80′s slider and a 78-80 MPH curve, and mixes in a 79-81 MPH changeup that occasionally flashes as a plus pitch with excellent movement. Rusin pitched well against the Pirates his last time out, allowing just one run in five innings. Pirates hitters really struggled to make contact with his secondary offerings in that game.