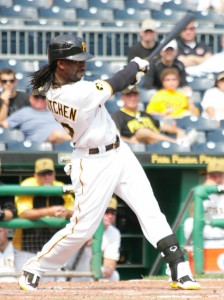 Andrew McCutchen has had an impressive 2012 season. So much in fact that when Pirates Manager Clint Hurdle was asked about the All-Star center fielder, he said he was one of the most intelligent players he’s ever worked with in the 35-plus seasons he’s spent in professional baseball.

“I don’t think I’ve ever met a more intelligent, mentally tough, balanced young man in my life. In my life,” Hurdle said before the game on Saturday.

After putting together four impressive months to start the season — which included a ridiculous month of July where he hit for a .446/.510/.739/1.249 line — McCutchen has slumped in the month of August. The 25-year-old has hit just .244 with two long balls and 12 RBI over his last 23 games. McCutchen connected for at least seven home runs in each of his three months previously. But despite the current slump, Hurdle doesn’t believe that McCutchen has the same swing he had during the second half of the 2011 season here in the month of August.

“I would say no — emphatically,” Hurdle said. “Just because you’re trying to take a guy that won back-to-back player of the month awards, and then you look at the month of August and your hair goes up. ‘Oh, my gosh!’ I think there is a rhythm and a rhyme to the game where there’s balance.”

“I’ve only played one guy that hit .370 in the season. As good as this is from Andrew’s perspective, I actually spent time with guys that were better. Which is crazy. It’s absolutely nuts. It’s like the big kid in little league that just dominates the whole year. You won an MVP title at the end of the night because you were the baddest dude in the league. What he’s dealing with now is just some other people, he’s getting a lot of attention, they’re paying attention, and he’s trying to maintain his balance and rhythm.”

While Hurdle was labeled a phenom back when he was drafted by Kansas City in 1975, he doesn’t know the exact pressures that go along with today’s game and that McCutchen goes through.

However, despite the current slump, Hurdle doesn’t believe that McCutchen has the same swing that caused him to hit just .216 in the second half of the 2011 season. He is currently hitting .322 in the second half this year after a .244 clip in August.

“The numbers, there’s going to be some slide,” Hurdle said. “There is a slide. Has his swing been maybe a little disconnect? Yeah. But I don’t think it was from the reasons that it was last year…He’s trying to barrel balls up and hit them hard. I don’t believe that. We’re talking about his approach not being where it needs to be. That’s the continuing conversation that were having.”

Hurdle believes there’s been recent evidence that McCutchen is breaking out of it, too. McCutchen has had at least one hit in eight of his last 11 games, which included a clutch two-run single in the Pirates 6-5 loss to Milwaukee on Friday night.

“We’ve seen sings of it [coming back],” Hurdle said. “He put a foot down and rifled that ball in right center field in St. Louis the other day. That was the moment for me we were thinking, ‘a-ha.’ When he starts hitting the ball back up the middle, to right center field, that usually for me is something happening. For him to stay on a pitch last night and drive in two runs, that was a tough pitch to hit, those were little signs. I do think it’s incrementally getting closer.”