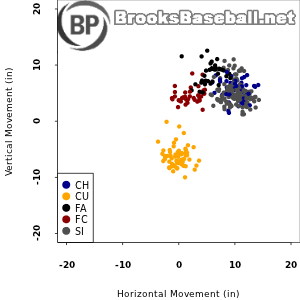 Keuchel is a left-handed pitcher who relies on command and deception to compensate for his unimpressive raw stuff. He throws an 87-89 MPH fastball and a sinker with decent arm-side movement. He has a pretty deep arsenal and mixes his pitches well. His best secondary offering is a 74-75 MPH changeup that he appears to command pretty well against righties. He also throws a slow 70-73 MPH curveball and an 84-85 MPH cutter. The changeup is the only secondary pitch Keuchel has been able to miss bats with so far in the big leagues, as his other offerings have been extremely hittable. He has allowed a ton of contact but has mostly kept the ball on the ground since his promotion to Houston. He has also struggled with walks, which is something he never had much of an issue with in the minors.