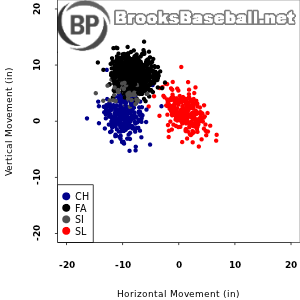 Scherzer, who throws from a low three-quarters release point, has excellent stuff. He keeps things pretty simple on the mound, sticking to three main pitches. His fastball sits in the 93-95 range and he can ramp it up to 97 MPH at times. The heater also has a good amount of movement and life. His slider sits around 85-88 MPH and is an elite strikeout pitch. The slider is particularly nasty against right-handed batters. Scherzer’s third pitch is a solid mid 80’s circle change that features a good amount of sinking movement. His fastball and slider are very tough to put in play. In 2012, the slider has a whiff rate right around 40% while the heater is missing bats at close to a 24% clip. Both of those numbers are well above average for the particular pitch type. The changeup is no slouch either, with a whiff rate right around league average. Scherzer generally sticks to the fastball/slider combo against right-handed batters and goes fastball/change against lefties. He does mix in an occasional changeup when facing a right-hander and has generated a lot of swings-and-misses in that small sample. Scherzer struck out a career high 15 batters in his start against the Pirates on May 20.