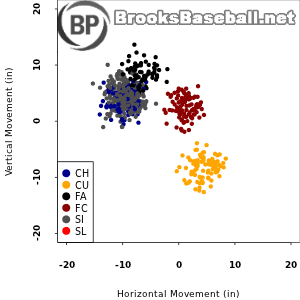 Fister does not have great stuff, but he has been effective over the past couple years due to good control and a pretty deep arsenal. His fastball generally sits around 87-89 MPH and has topped out around 91-92 this year. He threw a tick harder last year, managing to touch as high as 94 MPH late in the season. Opposing hitters have had no trouble putting his heater in play this year. In fact, he has not generated a single swing-and-miss with a pitch classified as a four-seam fastball in 2012. The two-seamer has not fared much better, as only six of the 260 pitches classified as a two-seamer by Brooks Baseball have drawn a swing-and-miss. His two-seamer has some decent arm-side run and sink, but is somewhat inconsistent. Fister also throws a mid 80’s cutter, which he likes to use in on the hands of left-handed batters. His mid 70’s curve is his best strikeout pitch, with a fantastic whiff rate of about 46% so far in 2012. He does have a tendency to leave the pitch up in the zone at times, though. The final weapon in Fister’s repertoire is a low 80’s changeup. He does not miss many bats with the pitch, but does generate a good number of ground balls with it. Overall, Fister has pretty hittable stuff, with the curve being his only real strikeout pitch. However, so far this year, he has managed a strikeout rate near league average due a good number of punchouts looking.