Barmes Getting His Swing Back After Working With Hurdle 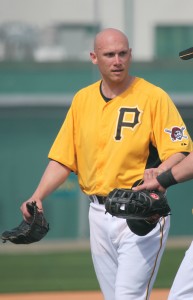 Clint Barmes had the worst start to 2012 in his professional career, which has spanned over parts of eight seasons in the Majors. Every time Barmes stepped to the plate, he was aware of his batting average, which was well below the Mendoza line. He heard boo’s from his home crowd after every at-bat. After hitting for just a .170 clip, Barmes and Manager Clint Hurdle decided to take a step back from the game to work on his swing.

What fans didn’t see was all the extra work the shortstop put in off the field. And after reconnecting with his swing, Barmes has looked much better at the plate.

“I see his swing better,” Hurdle said. “I do see him getting his swing off. Hitting fastballs. Not chasing as much. Those were the big things that we wanted to address. He’s put a lot of hard work in. He deserves a lot of credit.”

Over eight games in June, Barmes is hitting .308/.308/.500. He’s hit a home run (his third of the season) while driving in seven RBI this month, which tied his total for April and May combined.

The adjustment that Barmes worked on was similar to what catcher Rod Barajas went through when he, too, dealt with struggles to start the season. Barmes hit .143 over 49 at-bats in April but since has bumped his season average to .239 after hitting over .300 in May.

Even though the Pirates promoted infield prospect Jordy Mercer to the bigs, the club didn’t give up on Barmes.

“When you make a deal like this over the winter, you’re not going to unplug the guy after five weeks,” Hurdle said. “You might try and find times to rearrange the furniture and try and get a guy in to get an at-bat, tread water for a little while. We believe in this guy. It takes courage to exhibit some patience and we’ve had to exhibit courage in a couple different places.”

What Barmes hasn’t done is taken his offensive struggles with him out on the field. He’s last error came on May 3, and his glove up the middle has helped the young players on both sides of him on the infield. Pittsburgh has been charged with nine errors in its last 24 games beginning with the action on May 15. The team’s .990 fielding percentage in that time ranks third in the Majors behind Arizona (.993) and the Chicago White Sox (.990).

“His defense definitely came before his offense,” Hurdle said. “The one thing about all of our guys that were challenged offensively, they separated the ball. None of them took their bats on the field — especially him. He knows the importance of his position.”

“He’s a very solid defender. He does it in a very unorthodox way. He’s a one handed fielder. Coming out of the box, I think in a number of different situations he was just trying to do a lot, to show everybody what a good deal we made over the winter and even defensively it got in the way a little bit. Anytime you have a one handed fielder that makes some miscues it looks worse. ‘Why didn’t he use two hands?’ Well, he hasn’t been doing it since he was six. It’s the way he does it. He’s steady. He’s solid. He’s got a slow heartbeat in the middle of the infield. He’s got a lot of experience. We believed all along he would make Pedro better. He’d make Neil better. I think we’re starting to see that fall into place now. He’s definitely won us some games with his glove.”