In between the almost 30 posts to cover the winter meetings over the last three days, I’ve also been working on the cover of the 2011 Pirates Prospects Prospect Guide.  The book is around 180 pages, and I’m hoping to have it completed in the next few weeks.  There is no release date yet, although I’m aiming for the middle of January.

I’m very excited with how the book is coming along so far.  It includes over 150 reports from players with prospect eligibility who played in the US, along with a little over 70 profiles of the international prospects.  The book will also include references such as Rule 5 and Minor League Free Agent eligibility projections, top draft and international bonuses in team history, draft recaps for the last several years (including all announced bonuses), a 2011 draft preview, and the feature, the 2011 top 50 prospects.  It will also have features on Jameson Taillon, Stetson Allie, Zack Von Rosenberg, and Zack Dodson, including interviews with all four players.

I’ll have more updates on the book in the upcoming days, but for now, here is a preview of the cover (click the image for a bigger picture): 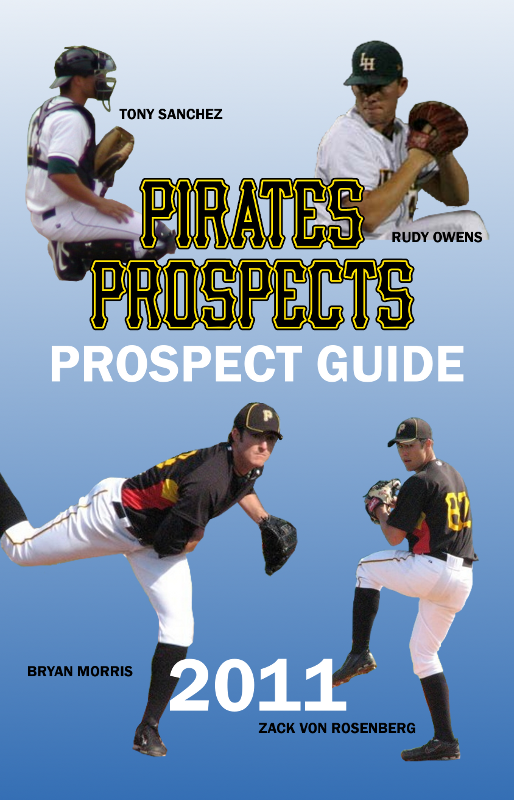 This would be fine, I guess, if the off-field instruction…

Geographic area?.....is the Cape Cod League no longer a high…

Shorter season as far as games played, but not shorter…

I wonder if he's ever hit a homer that just…

Looks great. I believe you can judge this book by its cover! Set a price yet? Preorders?

Price will be set once the book starts to come together. Will depend on how many pages, and my options for distribution.

I would have put Marte on the cover instead of Morris. Just personal preference. Looks great though!

Are we able to pre-order yet? If so, how? Thanks! Can’t wait to see what you’ve been working so hard on!

The options for cover photos were limited to keep the price of the book down. I’d like to have Jameson Taillon on the cover, but the cost of that one picture could be put to better use for the site. Most notably, putting the money toward a professional grade camera where I can get as many pictures as needed in Spring Training next year. One picture would cost about 2/3 the price of a used camera, or the equivalent of a radar gun, which is also on the site upgrade list.

I’ll have pre-order info as soon as I get a price range for the book. That will depend on the length of the book, and I’ll know more about that in the next week.

That’s very understandable. Sounds great. I can’t wait! I really do appreciate all of the effort you are putting into the site. I know it is a hobby of yours, but I really enjoy reading your work and I have learned so much more about baseball since becoming a daily reader. So, thank you for that.