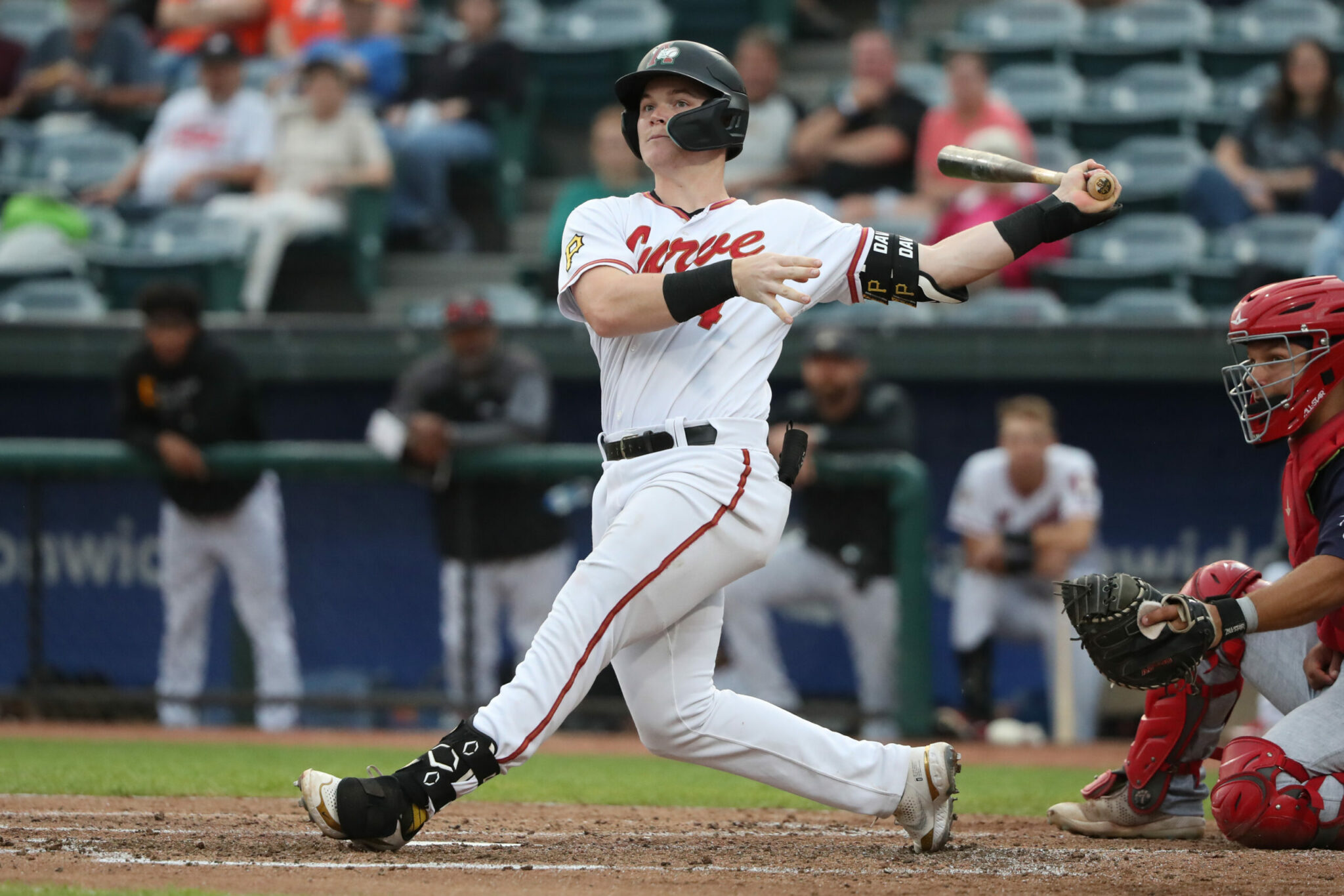 Here’s a look at the last week from the Pittsburgh Pirates system. Only Altoona and Indianapolis were in action, so we skipped the Player of the Week voting, but we are still taking a look at the top players for the week. Below you’ll find all of the hitters in the system with a decent amount of plate appearances and an OPS of .800 or higher last week. All of the pitchers below had an ERA of 3.00 or lower, while pitching more than three innings. A total of 17 players made the lists below, and 12 of them played for Altoona.

Henry Davis was the top hitter for the week with his .278/.381/.667 slash line in 21 plate appearances over five games. He homered twice, doubled and reached on three walks/HBP. He finished out the Altoona season hitting .207/.324/.379 in 31 games, missing time twice due to a wrist injury that happened before he arrived and took a long time to fully heal. He is one of nine Pirates prospects going to the Arizona Fall League.

Don’t shoot the messenger, but Josh VanMeter had the second best week with his .990 OPS in 16 plate appearances after clearing waivers and reporting to Indianapolis.

Endy Rodriguez continued his hot hitting (since May 1st basically), putting up a .981 OPS over 22 plate appearances in the final week. His week included seven hits, three doubles, three walks. His season likely isn’t over, as Indianapolis will get players from Altoona this week and then he has winter ball lined up in the Dominican. His final line with Altoona is .356/.442/.678 in 31 games.

Blake Sabol had a .967 OPS in 24 plate appearances last week. The top three prospects this week are also the three main catchers for Altoona this year. Sabol is with Indianapolis, where he has a 1.071 OPS in 17 games. He has been mostly playing outfield recently, catching twice in his last ten games. He’s still playing out the season with Indianapolis, but will also head to the AFL in two weeks.

Connor Scott was our first Player of the Week this year, and now he finished with a .965 OPS in 21 PA’s last week. In the 95 games in between April 17th and September 7th, he got lost at the bottom of a lineup filled with prospects (including himself), putting up a .620 OPS.

Liover Peguero finished up his Altoona season strong with an .879 OPS in 23 PAs, while going 5-for-5 in steals. He hit .259/.305/.387 in 121 games for Altoona this season, with 22 doubles, ten homers and 28 steals. I expect him to continue playing in some form, either going to Indy/Pirates and/or playing winter ball.

Matt Gorski had an .818 OPS in 21 PAs last week. After suffering what sounded like a season-ending injury 2 1/2 months ago, he played 13 games (including five with Bradenton) before the Altoona season ended. It’s possible he joins Indy to finish out the season, but at minimum he is going to the AFL to get in more time.

Brendt Citta made it on the list with an .804 OPS in 23 PAs last week, helped out by two doubles and a homer. He has a .768 OPS in 33 games with Indianapolis, improving on the .667 mark he put up with Altoona this year.

Aaron Shortridge leads the pitching side with his seven shutout innings from Saturday. He had quite a finish to his first season since 2019, allowing just one earned run in his final four starts. It was a rough year overall, but we are talking about someone who missed 2020 due to the shutdown, missed 2021 due to Tommy John surgery, and returned mid-season this year. I don’t know who is moving up to Indianapolis among pitchers, but there are a lot of candidates on this list. Either ones who can use more innings, or prospects they want to give more time.

Kyle Nicolas finished his Altoona season strong with 5.2 shutout innings. His final stat line with the Curve this season shows a 3.97 ERA in 90.2 innings, with 101 strikeouts and a 1.30 WHIP.

Carmen Mlodzinski was part of a strong week for Altoona starters, throwing five shutout innings in his start. He finished his Curve time this season with a 4.78 ERA in 105.1 innings, with 111 strikeouts and a 1.41 WHIP.

Omar Cruz tossed 3.1 no-hit/shutout innings over two games for Altoona. He is headed to the AFL, where he will make up for some lost time that limited him to 62.2 innings this season.

Nick Mears threw 3.1 shutout innings over two games for Indianapolis, which is a great sign considering how rough his season has been due to injuries. He has thrown just 27 innings this year.

Matt Eckelman was also part of the strong week from Altoona starters, giving up one run over six innings in his two starts. He’s a knuckleball pitcher now and it seems to be working very early in the process.

New to the site this season, but will there be an overview of the level of competition for winter ball leagues? Im not the most familiar but i plan to follow closely this offseason!

Yes, there will be a preview at some point. Based on past seasons, the talent level for the leagues ranks:

Dominican is about the same as an average AAA team to start the year and near the end with the playoffs it’s basically like a very bad big league team (Pirates would be a good example this season). Mexico is like weak AAA, Puerto Rico/Venezuela is more like AA, with Venezuela not as strong as it used to be because they can’t draw as well as before. Australia is like a weak AA, Colombia is more like Low-A, Nicaragua and Panama are more like the FCL now (better than the GCL, but not as good as the NYPL).

Those are average rankings over the years. Australia drew really well once and was a little better, same for Puerto Rico. It helps to have affiliations with big league teams, like the Pirates do with Gigantes de Carolina in Puerto Rico, and they used to have with Venados de Mazatlan in Mexico.

Nice to see the top names in Altoona finish the season on a high note. Although Davis & Gonzales didn’t meet expectations this season, I still believe they will be key players on the next competitive Pirates team.

I’d not declare that they failed to meet expectations. I think injuries held them back. It will be nice to see them in the AFL. Both have reputations of being hard workers. I’m betting they put on a show.

Yeah, but the injuries also delay and have an effect on the development. With Davis and his position, it’s the cost of doing business at that position. I’m more concerned with G, as I think Davis’ underlying numbers are mostly settled. Either way, I’m glad they can pick up time in the AFL and

Honestly best case scenario is that the MIFs in front of him play well enough that he does become trade bait for pitching!

Idk, he’s just about the only upper level MIF prospect that has consistently shown the ability to get on base.