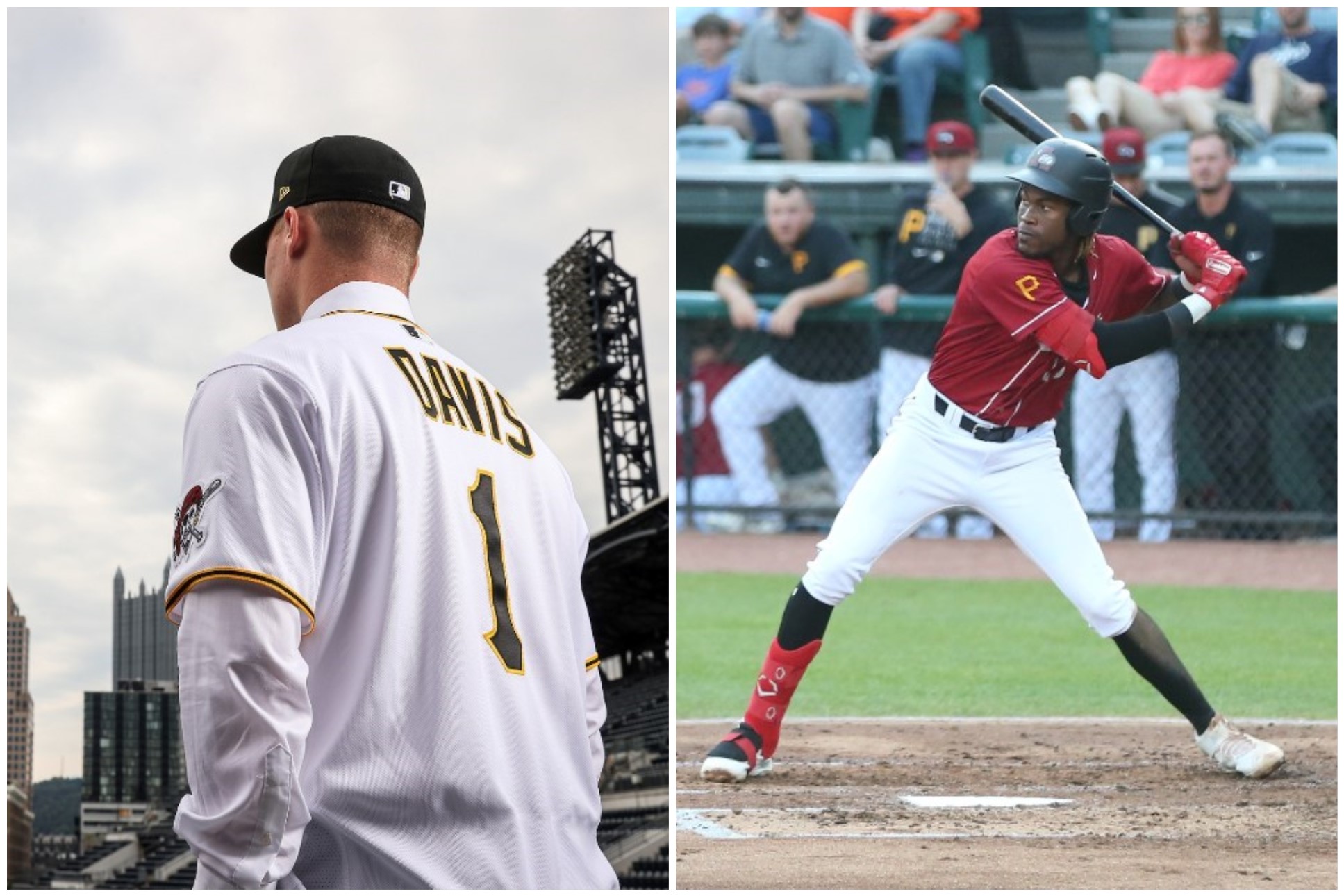 Welcome to Prospect Roundtable, a new feature on Pirates Prospects where we will discuss different topics about the Pirates’ farm system with the people who write about them the most.

2021 first overall pick Henry Davis is pretty much the consensus top prospect in the Pirates’ system, although the Pirates have another candidate for the top spot in Oneil Cruz. I asked this week’s participants who they would choose between the two players.

Be sure to follow everyone and check out their work in the links below!

Gary Morgan, Inside the Bucs Basement

1. If you were starting a franchise, would you take Henry Davis or Oneil Cruz?

This is a great choice to have because either way you’re getting a high upside player. Cruz has the better tools overall and the higher upside, but if I had to bet on one of them reaching their upside, it would be Davis. If I’m starting a franchise and these two are my only choices, I’m going for the player I feel more confident in reaching the upside, though I’ll note that the position also has a lot to do with the decision. If Davis was a first baseman, he would not be my choice, but as a catcher, he has a legit chance to be the best hitter at the position in franchise history.

With Davis, you have a guy with a high likelihood of being at least a solid starter for however many years ownership is willing to pay him. There’s also a very good likelihood of him being an elite player (maybe a 20-30 HR hitter with good on-base ability) at a premium position. With Cruz, the ceiling may be higher, but it’s kind of a fantasy scenario where he becomes a 40-HR shortstop. His range of outcomes, even if he works out well, is much wider than Davis’. For instance, he could be a 40-HR guy who doesn’t get on base much. Davis is more reliably going to end up as a player you could build a team around.

This is so hard. I mean, the wonderful part about this is there isn’t a wrong answer. I lean Davis because I really believe in his bat. If Davis is able to stay behind the dish, then this really becomes an easier decision given the lack of catching at the big league level. Davis hedges the questions about whether he can stay at catcher with an elite arm and good athleticism which would allow him to anchor a corner outfield spot if it came to it. For context on how good Davis was offensively, here is where his Junior season stacks up with Joey Bart in the same conference.

Bart’s defense reigns supreme, but wow. I also believe that Davis has a good shot at sticking behind the dish. This is not a slight of Cruz at all, he has done his best to quell any questions around his game given his unprecedented profile. I have been impressed by his ability to stay short to the ball despite being tall and long enough to play power forward, but I am worried that big league pitchers may be able to exploit some holes in his approach. Also, how does a 6-foot-7 shortstop age? We have no clue, but I am a bit worried that it won’t be gracefully.

Prior to his injury, Davis put together an at-bat that caught my eye; he ultimately struck out, but it’s what he did in that at-bat. Davis was down 0-2 in the count with the bases loaded and fought back to 3-2. After several foul tips, he whiffed, a kid out of college generally doesn’t fight back to 3-2 in their first pro season, and it was from there that I knew Davis was special.

I’m more of a floor guy than a ceiling guy. Davis as a baseline player has potential to play a key role that touches every area of this club and while Cruz’s ceiling is a bit higher, Davis is the safe play here, even if for some reason he wouldn’t stick at catcher, I like his chances to be a consistent contributor a little more.

If you look at two franchises like the Giants and Cardinals, you notice they have been pretty successful for a long period of time. I think a lot of that has to do with Buster Posey and Yadier Molina. Those two players have been the cornerstone for those organzations for more than a decade. They have 5 World Series rings combined and have been center pieces to their teams lineup throughout the years. I believe Henry Davis can be that type of player for the Pirates. Fangraphs most recently changed his future value to a 55, which bodes well for this potential outcome.

2. Would your answer change if you were running a team already contending?

Neither is ready to help right now and I don’t see Davis being that far behind Cruz in development that it would change my opinion.

I can imagine scenarios where I’d rather have Cruz, like if I had a team that badly needed to add big-time power. But when you’re contending, the difference maker is always going to be that elite player, and the odds of finding an elite player at catcher are easily the lowest with any position, including shortstop.

As I said earlier, the catching position is so scarce in baseball that Davis could be a commodity. If he winds up in the outfield, I think his offensive profile is safer too. That said, Cruz has the ability to hit 40 homers and make me look dumb. That would be awesome.

Catchers are a dime a dozen; more times than not, you can find one to catch a game or two and maybe get lucky at the plate every once in a while, but when you find a catcher that could potentially lead a franchise and a pitching staff, you keep him, and you keep him until the wheels fall off.

I’d have to. One is close to cracking the bigs, the other is at least two if not farther away from the show. For instance, if this was Davis or Travis Swaggerty I might have to go with Travis for the same reason.

The Pirates are in desperate need of a player that can be someone like Yadier Molina or Buster Posey. That type of player can help rebuild and start something special for that particular organization. The catcher position is valuable in so many ways which includes helping out young pitchers. Oneil Cruz is the type of player I would want if I already have an established team and are in need of a dynamic and exciting player that can change a game on one swing of the bat.

3. Is there anyone else in the system who could challenge these two players for the top spot?

Quinn Priester would be the closest, though watching him in a recent start didn’t give me a lot of confidence in saying that. Everyone has an off-day, but combined with him being a month removed from having a low strikeout rate compared to most pitchers in the system (he’s 21st in strikeout rate among qualified pitchers), I’d really like to see him missing more bats on a consistent basis before I put him as the top prospect in the system.

The most likely one might be Roansy Contreras. He hasn’t done it for all that long yet, but his upside as a pitcher may be greater than Quinn Priester’s. The other possibilities would be Priester and Nick Gonzales. Priester’s season has been uneven, although still very good, but there are people who don’t like his fastball a great deal. Gonzales’ struggles earlier were likely the result of the broken finger. Assuming that’s true, he’s probably similar to Davis in being a guy with a good chance of reaching his ceiling. But his ceiling isn’t as high due to position and Davis’ greater power.

After the last blurb I was fortunate enough for you all to include me in, I think it is safe to say that I am incredibly excited about Nick Gonzales. The K-rate was a tad higher than what we have come to expect from Gonzales, but I really think his shoulder injury played a part in that. Over his final 25 games, Gonzales posted a 200 wRC+ and 0.64 BB/K. While the 200 wRC+ may be a bit higher than where he will normally reside, the BB/K ratio is more indicative of what we can expect to see from Gonzales next year. He is one of my favorite bats in the minors.

This answer is going to sound a little cliché, but Quinn Priester is a candidate to become one of the pivotal pieces in 2024-2025, when the Pirates could hypothetically contend. Chicks dig the long ball, but it’s pitching that keeps the lights on at the end of the day. In a notorious hitters ballpark in Greensboro, Priester has held opponents to a .718 OPS, and if you look at his stats away from home, opponents have a .544 OPS; SIGN ME UP!

Quinn Priester could, especially if what he’s learned this season carry over to Altoona next year. If he has close to this type of showing next year he’ll wind up being at least in the conversation for top pitching prospect in the game and it’d be hard to not see that supplant Davis or Cruz.

Having a true “ace” in your starting rotation in my opinion is very important. When you look at all of the successful teams, they have that. Priester has the stuff to turn into that type of pitcher. Time will tell if he can develop into a number 1, but his ceiling is very high.
27 Sep 2021
Analysis
Henry Davis, Oneil Cruz
0 0 votes
Article Rating
Subscribe
Login
Please login to comment
0 Comments
Inline Feedbacks
View all comments