First Pitch: Fifth Round Draft Results for the Pittsburgh Pirates 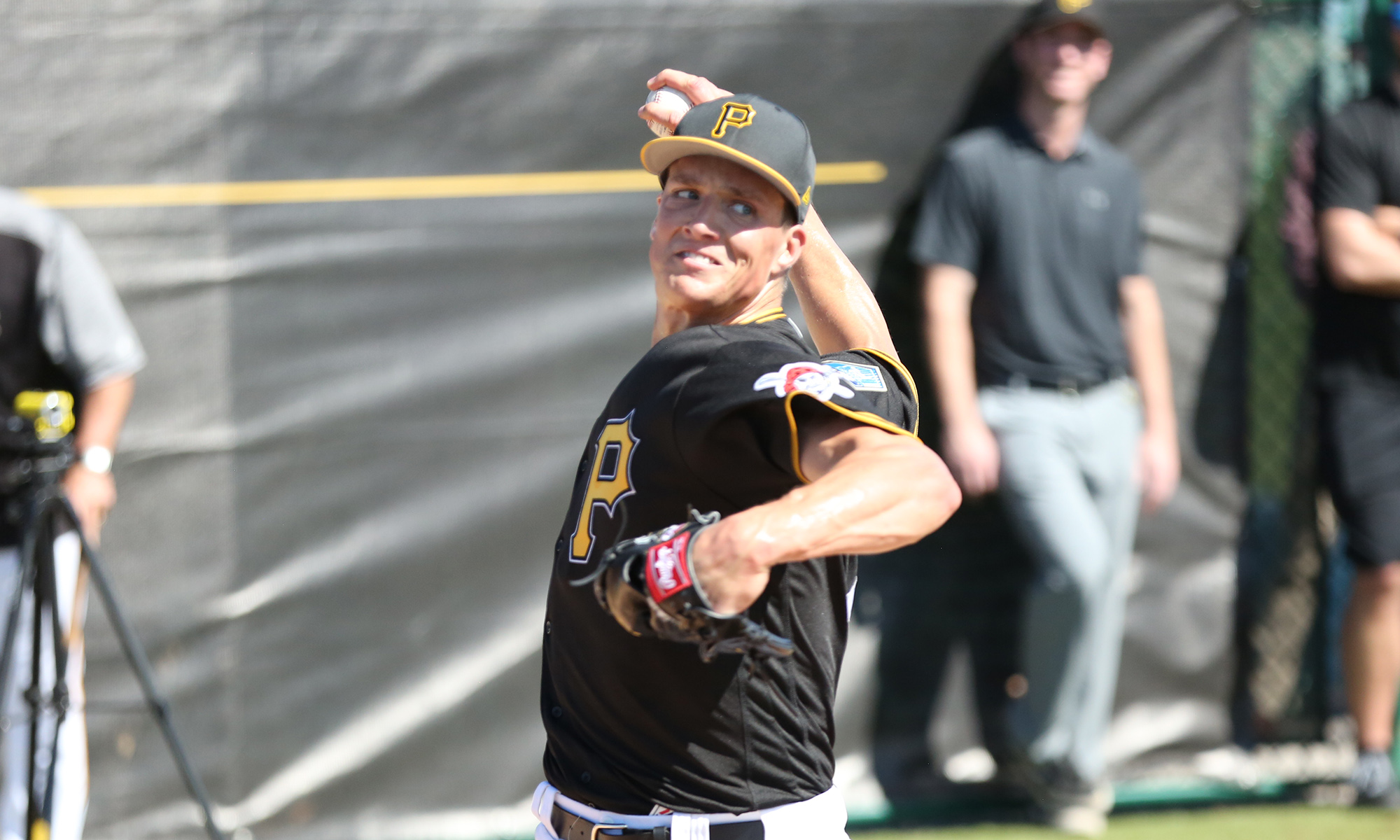 This year’s MLB Amateur draft will take place on June 10th/11th and will consist of five rounds. Over the past four days, we have been looking at the draft results in each round since 1965 for the Pittsburgh Pirates. Today we move on to the fifth round. After a brief summary of those results, we will compare the fifth round to the previous rounds.

The Pirates have made 55 fifth round picks over the years. We won’t include the five picks who are still in the minors, as well as the eight picks (all high school players) who weren’t signed. That group includes Bip Roberts, who went on to have a solid career in the majors.

Of the remaining 42 picks, just seven of them have made the majors. That’s a 16.7% success rate.

Instead of breaking down the group even smaller like we did with the previous lists (which had more players), here are the seven MLB players drafted in the fifth round:

That group produced 36.2 WAR already and three of them are still active players, though Sampson went overseas this year. Obviously, a great percentage of the WAR came from Dave Cash. Teams would love to pick up a Dave Cash in the fifth round, but there obviously isn’t a good chance of that happening. As yesterday’s results showed, no one drafted in the fourth round by the Pirates came close to being as good as Cash, so even finding a player like him over the two rounds is hard to do.

The fifth round results would be very similar in value to the fourth round without Cash, but the success rate of getting an MLB player falls off greatly. Here are those percentages per round for the Pirates:

The WAR per draft pick doesn’t have the same drop when you look at the average per round:

I’m going to do one more of these lists tomorrow. When we first heard that the draft could be shorter, it was discussed that they could go to ten rounds this year, so I’m going to do a quick summary for rounds 6-10 in one article to see the possibilities with those picks.

Three former Pittsburgh Pirates born on this date, plus two trades of note. Before I get into them, I’ll mention that current pitcher Luis Escobar, who debuted in 2019, turns 24 today.

On this date in 1912, the Pirates traded long-time third baseman/outfielder Tommy Leach, and pitcher Lefty Leifield to the Chicago Cubs in exchange for pitcher King Cole and outfielder Solly Hofman. Leach had been with the Pirates since coming over in the Honus Wagner trade in 1899. He is among the Pirates top ten all-time in games played, at-bats, runs scored, triples and stolen bases. Leach was hitting .299 at the time of the trade, but at age 34, he was thought to be near the end of his career. Leifield had been a mainstay in the Pirates rotation for the last six years, although in 1912 he was seeing very little time on the mound. At age 27, he was coming off a season in which he went 16-16, 2.63 and pitched a career high 318 innings. Cole had won 38 games between the 1910-11 seasons, but in 1912 he was struggling badly. The Pirates were hoping the 26 year old righty could regain his form. Hofman began his career with the 1903 Pirates as a 20-year-old. He had spent the last ten years though with the Cubs. In 884 games, he hit .271 with 441 runs scored and 158 stolen bases. In 1912 he was hitting .272 in 36 games with 28 runs scored.

The trade was a clear win for the Cubs. After the trade, Hofman had leg problems and was used very seldom, getting into just 17 games. Early in the 1913 season he was sent to the minors, then jumped to the Federal League in 1914. Cole was also seldom used, pitching just 49 innings for the Pirates, posting a 6.43 ERA. He was sent to the minors in 1913, spent the next two seasons with the Yankees, then unfortunately passed away in 1916 from tuberculosis. Leifield and Leach were both holdouts during Spring and it was said to contribute to their departure. Leifield pitched well when he played, but wasn’t used often. He went 7-2, 2.42 in 70.2 innings. The next year he pitched just six games before spending five seasons in the minors. He eventually returned to the majors for three more seasons (1918-20). Leach was a good role player for the Cubs in 1912, then had a strong 1913 season, leading the NL in runs scored with 99. He then played 153 games in 1914, hitting .263 with 79 walks, while leading the NL in at bats. He hit just .224 with 17 RBIs in 107 games in 1915, then spent two years in the minors before returning to the Pirates in 1918 for one last season.

On this date in 1925, the Pirates traded first baseman Al Niehaus to the Cincinnati Reds in exchange for pitcher Tom Sheehan. Niehaus was a minor league star, getting his first chance at the majors. He had batted over .330 in three straight seasons prior to joining the Pirates for the 1925 season. He was signed by the Cubs, but before he played a game for them, he came to the Pirates on October 27, 1924 in a six-player deal. He played 17 games for Pittsburgh before the trade, hitting .219 with seven RBIs. Pittsburgh was able to trade him because they signed Stuffy McInnis one day earlier. Sheehan was in his fifth season in the majors, although they were spread out over an 11-year time-frame. He was 9-10, 3.24 for the Reds in 1924, pitching 166.2 innings over 39 appearances, 14 as a starter. In 1925, he was struggling, allowing 31 runs in 29 innings.

After the trade, Niehaus hit .299 in 51 games for the Reds. He returned to the minors, playing another four years down on the farm before retiring. Shortly after his career ended, he contracted pnuemonia, and died from it just two days later at 32 years old. Sheehan pitched 23 games for the Pirates, all in relief. In 57.1 innings, he had a 2.67 ERA. He was with the team the first two months of 1926, but was returned to the minors in June. He played another nine seasons before retiring as a player, never making it back to the majors again. He wound up with 259 minor league wins, with another 17 victories during his time in the majors. The Pirates also had a third baseman during the 1906-07 seasons named Tom Sheehan, who was of no relation to the latter player

Al Mamaux, pitcher for the 1913-17 Pirates. The Pirates signed him from Duquesne University and brought him to the majors at the end of the 1913 season. During that 1913 season, he went 18-16 in 39 games for the Huntington Blue Sox of the Ohio State League. Mamaux pitched one game for the Pirates, going three innings in relief on September 23rd. In 1914, he made six starts and seven relief appearances, pitching a total of 63 innings, with five wins, two shutouts and a 1.71 ERA. The next year, he would establish himself as one of the NL’s best pitchers. He went 21-8 with a 2.04 ERA and eight shutouts. Those eight shutouts are the highest total in franchise history since the team moved to the NL in 1887. He also struck out 152 batters in 1915, the fourth highest total in the NL. During the 1916 season, Mamaux won 21 games again. He finished third in the NL with 163 strikeouts and his 310 innings pitched were the fourth highest total in the league.

In what should have been the start of a great career, Mamaux let conditioning and insubordination get in the way of his success. He was suspended during part of the 1917 season and almost all of the following year. He pitched just 18 games between 1917-18, going 2-12, with 11 of those losses coming with the 1917 Pirates. Pittsburgh included him in a five-player deal with Brooklyn on January 9, 1918 that included two future Hall of Famers, Casey Stengel and Burleigh Grimes. Mamaux pitched another seven seasons in the majors, going 27-30 in 139 games. His Major League career ended in 1924, but his playing days were far from over. He lasted in the minors until 1935, five of those years as a player/manager, before finishing his career as a manager in 1936. He won 150 minor league games, to go along with his 76 big league wins.

Donlin had married a famous actress and he himself took up vaudeville acting during his time away from the sport. He returned to baseball for 1908, and hit .334 with 106 RBIs, but he sat out the next two years, deciding that he made much more money acting so he wouldn’t play baseball anymore. By 1911, the acting had begun to slow down and he changed his tune, returning to the Giants. Donlin was sold to the Boston Rustlers (Braves) in August of 1911 and finished the season hitting .316 in 68 games. The Pirates acquired him on February 17, 1912 in exchange for outfielder Vin Campbell. Donlin missed time in June to be with his wife, who was sick, then almost immediately after returning he injured his foot while batting. He hit .316 for the Pirates in 77 games, spending most of his time in right field. The Pirates put him on waivers in December, where he was picked up by the Phillies. Donlin sat out the 1913 season, returning to a minor league team at the end of the year. He then played for the Giants in 1914 before finally calling it quits as a player, this time for good. He was a .333 hitter in 1,049 big league games.