First Pitch: A Look at the 2019 Greensboro Grasshoppers Pitching Splits 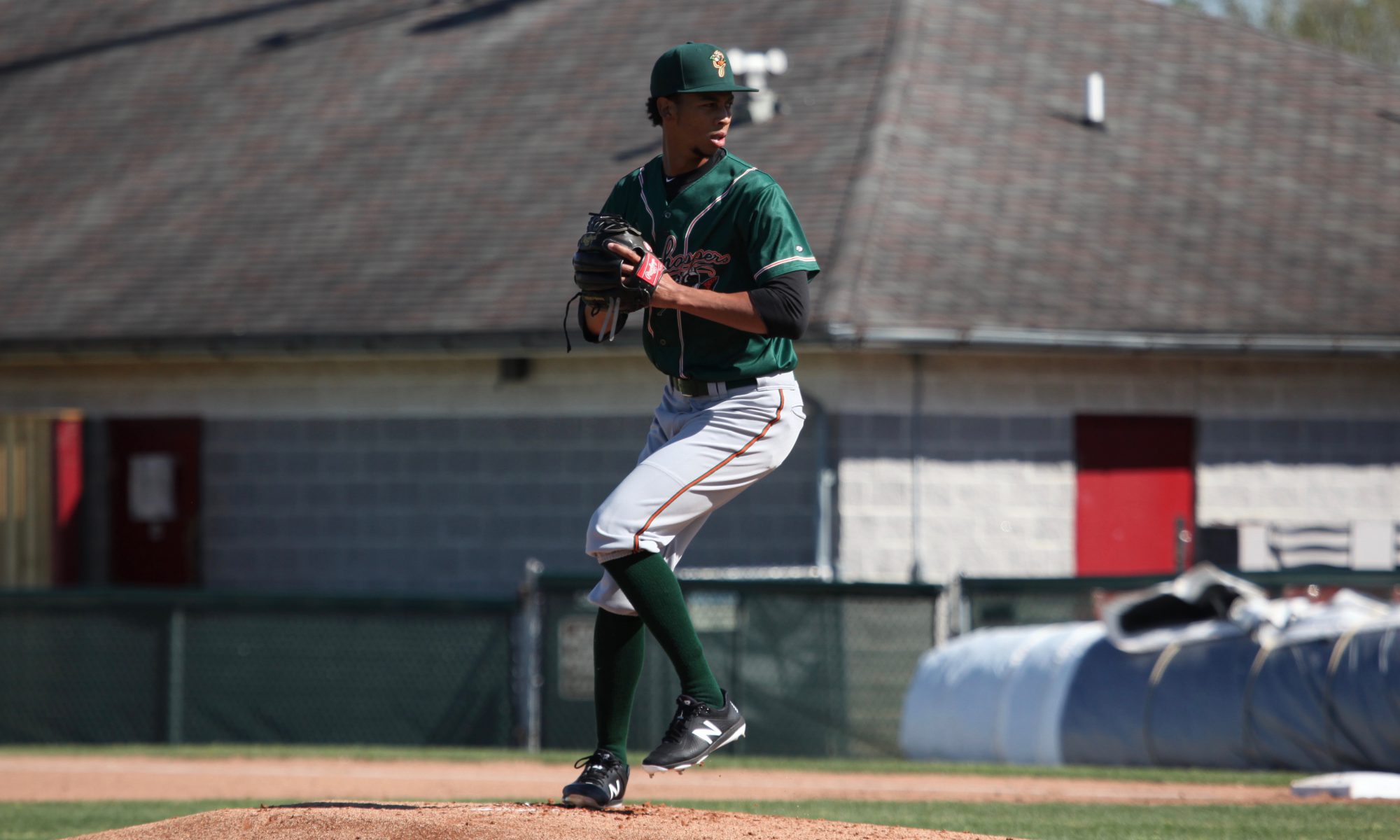 The last two days have been looks at the pitching splits for the Altoona Curve and Bradenton Marauders during the 2019 season and comparing them to the hitters for the same team. Today we move on to the Greensboro Grasshoppers, where they had some interesting hitting numbers. Seven players favored the home park, seven favored the road. There were six big home/road splits, with three favoring home and three favoring the road. Today we see if the pitchers had the same type of splits or if they leaned a certain way.

We have been using a minimum of 40 innings pitched last season for this exercise. Anything less would give you small sample sizes for both the road and home games. A total 11 pitchers qualified for the article, led by Alex Manasa, who threw 139.2 innings. The players are listed below in order of their innings pitched, starting with Manasa and working our way down.

Alex Manasa – Manasa had slightly better WHIP/BAA at home, but his 3.90 ERA in Greensboro was a bit higher than the 3.14 road mark. The difference here is ten homers at home in 62.1 innings, compared to five on the road in 77.1 innings.

Steven Jennings – Jennings has some odd splits. At home he had a 4.46 ERA, a .296 BAA and a 1.49 WHIP. On the road, his ERA was higher (5.02), but the BAA (.233) and WHIP (1.13) were much lower. I’m wondering here if it was partially an official scorer issue because he allowed 12 unearned runs at home and just three of the road, or did the Grasshoppers just do that poorly on defense behind him at home? That would require a much more in depth look, but it’s interesting to note.

While the hitting stats ended up being a wash, seven of the 11 pitchers had a higher ERA at home, and another one was basically the same road/away. The numbers here say that Greensboro pitchers as a group preferred being away. That being said, they still did well at home (38-31), but you would expect the better record on the road with those splits, and that’s what happened (41-28).

Four former Pittsburgh Pirates players born on this date, plus a great performance by the Great One.

Al McBean, pitcher for the 1961-68 and 1970 Pirates. He was signed by the Pirates in 1958 out of the Virgin Islands for a $100 bonus, just the second Major Leaguer to be signed out of there, with the first one being another Pirates player, Joe Christopher. McBean was in the majors by the middle of the 1961 season, posting a 3.75 ERA in 74.1 innings that rookie season. He made just two starts (25 relief appearances), but the following season he was moved into the starting rotation. He had a good season, going 15-10, 3.70, finishing second on the team in wins to Bob Friend. Despite the strong stats, it was said that he wasn’t cut out for starting because he worried too much about his starts the whole previous night prior to the game, sometimes getting no sleep. He was moved to the relief role in 1963 and was used often in that role, topping 85 innings in each of the next five seasons. In 1964, he won eight games, saved 22 and had a 1.91 ERA in 58 games.

In 1968, McBean was moved back to the starting role and pitched two shutouts in his first five outings. He began to struggle as the year went on and by late August, after two very poor outings, he was moved back to the bullpen. McBean would be selected by the San Diego Padres that October in the expansion draft. He pitched one game for them before being traded to the Dodgers. After one appearance during the 1970 season, Los Angeles released McBean and he quickly signed back with the Pirates. His second stint with the team lasted less than a month before he was released, following an 8.10 ERA in seven outings. He finished his career playing two more years in the Phillies farm system. In 376 games for the Pirates, 75 as a starter, he had a 3.08 ERA with 65 wins and 59 saves.

Jimmy Wasdell, outfielder for the 1942-43 Pirates. He was one of four players the Pirates acquired in the Arky Vaughan trade with the Dodgers on December 12, 1941. In parts of five seasons in the majors prior to the trade, he had a .270 average with 11 homers and 126 RBIs in 295 games. In 1942 for the Pirates, Wasdell saw plenty of action at the corner outfield positions, while also getting starts in center field and first base. He hit .259 with 38 RBIs and a .655 OPS in 122 games. Despite the fact he played less than 100 games in the outfield, he finished second among all NL outfielders in errors committed. Wasdell wasn’t with the Pirates for long in 1943. After four pinch-hit appearances in the first week of the season, he was sold to the Phillies. He became a solid player in Philadelphia, playing there for 3 1/2 seasons, with his best season coming in 1945 when he hit .300 with 60 RBIs. That year, he struck out just eleven times in 541 plate appearances. He lasted in the majors until 1947, getting one at-bat for the Indians that year before being released. He finished his pro career with three more seasons in the minors. He was a player/manager his last season in the minors, then managed during the 1950 season.

Jimmy Smith, shortstop for the 1916 Pirates. He was a light-hitting shortstop, who was a native of Pittsburgh, Pa and an alumni of Duquesne University. There have been just eight players in Major League history who have attended that school and six of them played with the Pirates. He spent the first two seasons of his big league career in the Federal League, considered an outlaw Major League at the time. After hitting .207 in 128 games in 1915, he was released and signed with the Pirates as a free agent on February 6, 1916. He was with Pittsburgh at the beginning of the year, playing shortstop when Honus Wagner played first base, but by June Smith was sent to Toronto of the International League. He hit .222 there in 85 games before returning to the Pirates in September. In a total of 36 games for the Pirates, Smith hit .188 with five RBIs. He was sent back to Toronto in 1917 after unrealistic salary demands and eventually he was released so he could sign with the New York Giants. He played in the majors until 1922, getting into 370 games, with a .219 career average.

Harry Salisbury, pitcher for the 1882 Pittsburgh Alleghenys. He attended Brown University from 1877 until 1879, then made his major league debut for the Troy Trojans of the National League after graduating. Salisbury went 4-6 with a 2.22 ERA in ten starts that year for Troy. He had prior pro experience, playing minor league ball in 1877, the first year that organized minor league ball existed. His next known baseball experience came for the 1882 Pittsburgh Alleghenys, when he showed up on the roster one month into the season. The team started the season with a 6-5 record over the entire of May (games played were sporadic due to travel and limited time to draw up the first schedule) and Salisbury made his debut the next day in an 11-4 win. The Alleghenys played 79 games that year, and of the 68 played from June 1st on, he started 38 of those games. He also pitched a complete game in all 38 of those games, getting in a total of 338 innings. He is the first twenty-game winner in Pirates franchise history. That 1882 season was his last in the majors and he played at least another three years in the minors afterwards. It was said that he had signed an 1883 contract to play for Louisville of the American Association before the 1882 season ended and some noise was made by Pittsburgh management about his last game in an Alleghenys uniform, which was a 20-6 loss to Louisville.

On this date in 1967, Roberto Clemente had the game of his career, yet the Pirates still lost to the Reds by an 8-7 score. He went 4-for-5 with a double and three home runs. Clemente drove in all seven runs for the Pirates. He hit a two-run homer in the first inning off of Milt Pappas. Clemente repeated that feat in the fourth inning. In the seventh he brought in two runs with a double. He capped his night with a solo homer in the ninth inning. The Reds won in the bottom of the tenth on a walk-off double by Tony Perez, which scored Rose from first base. Clemente would hit three homers in a game two years later, but he never drove in more than five runs in any other game.