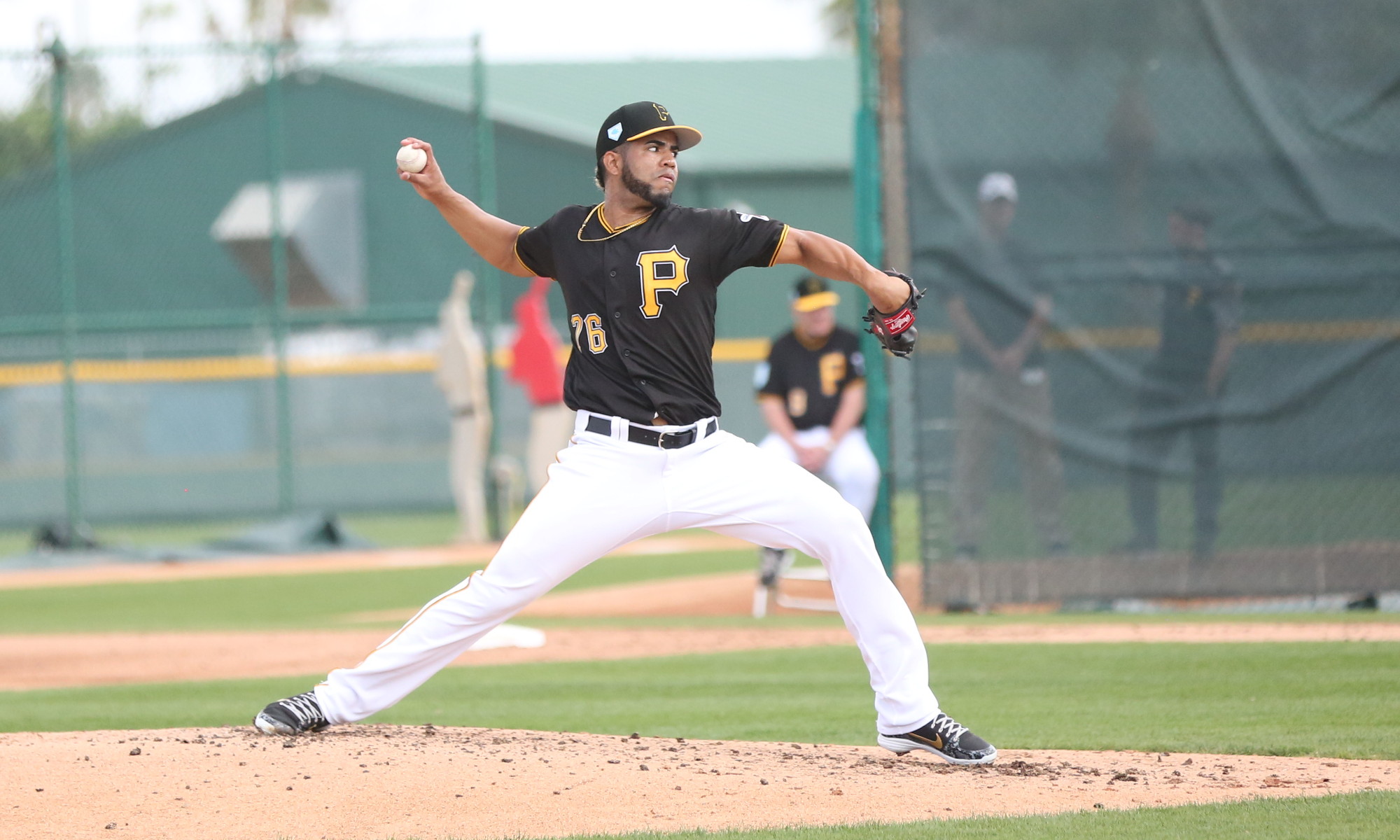 I’ve been looking for some series I could do daily in First Pitch, so I decided to look for the best ten Game Scores from starting pitchers in 2019 for each affiliate of the Pittsburgh Pirates. Bill James developed the Game Score for pitchers, which you will see in the boxscores on MiLB. It starts with a base of 50 points and awards points for good pitching (strikeouts, recording outs and pitching late in games), while subtracting points for things such as walks, hits, earned runs and unearned runs.

Below you will find the ten best Game Scores for starters on the 2019 Indianapolis Indians, with a brief description of each game. I’ll go through the entire system down to the Dominican Summer League affiliates. With tie scores, I just listed them alphabetical, and if it was a tie between multiple starts for the same pitcher, I went in chronological order.

Six former Pittsburgh Pirates players have been born on this date.

Steve Pearce, first baseman/right fielder for the 2007-11 Pirates. Pearce hit .301 in 72 games for Williamsport in 2005. He moved up to low-A ball to start 2006, splitting the season between Hickory and Lynchburg. He hit a combined .273 that year, with 26 homers, 97 RBIs and 83 runs scored. Pearce repeated High-A ball to start the 2007 season. but quickly worked his way up the system, finishing the year in the majors. Between three stops in the minors, he hit .333 with 40 doubles, 31 homers and 113 RBIs. In the majors he hit .294 in 23 games. Pearce started the 2008 season at Triple-A, getting recalled in July and hitting .248 with four homers and 15 RBIs in 37 games. In 2009, he was hitting .286 with 13 homers and 54 RBIs through 77 games at Triple-A when he got his third shot at the majors. He played a career high 60 games with the Pirates, hitting .206 with 13 doubles, four homers and 16 RBIs. He opened his season at Triple-A for the third straight year in 2010, this time getting recalled in early May. He was hitting .276 through 15 games, when he injured his ankle at first base chasing down an errant throw from third baseman Delwyn Young. Pearce would not return to the Pirates that season. In 2011 he made his first Opening Day roster, but hit just .202 in 50 games . The Pirates let him go in November and he has played with the Orioles, Astros, Yankees, Red Sox, Blue Jays and Rays since then (the entire AL East). In 13 seasons, he’s a .254 hitter in 766 games, with 91 homers and 303 RBIs.

Ricardo Rincon, pitcher for the 1997-98 Pirates. He pitched in the Mexican League for six seasons, prior to signing with the Pirates in March of 1997. That first season in the majors, he pitched 62 games in relief, getting into a total of 60 innings. Ricardo had a 4-8 record, with a 3.45 ERA, four saves and he recorded 71 strikeouts. On July 12, 1997, he pitched the final inning of a ten inning no-hitter, started by Francisco Cordova. He began the 1998 season in the minors but quickly returned to Pittsburgh, where he made 60 appearances out of the bullpen, getting into a total of 65 innings, with 64 strikeouts, a 2.91 ERA and 14 saves. On November 18, 1998, the Pirates dealt Rincon to the Cleveland Indians for outfielder Brian Giles. Rincon last pitched in the majors in 2008 with the Mets. For his career, he had a 21-24, 3.59 record in 565 games, all as a reliever.

Doug Strange, infielder for the 1998 Pirates. He began his career in the Tigers system, getting drafted in 1985 and first playing in the majors in 1989, when he hit .214 in 64 games. Strange next appeared in the majors briefly in 1991 with the Cubs (four games) and then for 52 games in 1992 when he hit .160 in 94 at-bats. Chicago let him leave via free agency and he signed with the Texas Rangers for 1993. He had his best season in the majors that year with a .256 average and 60 RBIs in 145 games. Strange wasn’t able to repeat those numbers the next season, then he moved on to Seattle, where he was a bench player for two seasons. In 1997 with the Expos, he hit .257 with 47 RBIs and a career high 12 homers in 118 games. The Pirates signed him as a free agent on December 2, 1997. In 1998 he played mostly third base and saw plenty of opportunities in a pinch-hitting role. He missed almost the entire month of July and struggled when he did play, hitting .173 with no homers and 14 RBIs in 90 games. Strange was with the Pirates in 1999, but was placed on the disabled list to start the season due to an elbow problem. By mid-season it was determined he needed surgery, which ended his season. He played briefly in the minors in 2000 before retiring as a player. Doug is currently the Special Assistant to the GM for the Pirates. He has been in the Pirates organization in some capacity since 2002.

Claude Hendrix, pitcher for the 1911-13 Pirates. He pitched two seasons in the minors with mixed results before having a strong season in 1910 pitching for a semi-pro team out of Wyoming, where he struck out over 200 batters and won 17 games. The Pirates signed him for 1911 and he made 12 starts and ten relief appearances that year. In 118.2 innings, he went 4-6 with a 2.73 ERA. In 1912 he was in a starting rotation that included star pitchers Howie Camnitz and Babe Adams, but it was Hendrix who had the best season. He went 24-9 with a 2.59 ERA and a team leading 288.2 innings pitched. He threw four shutouts, 25 complete games and he struck out 176 batters, second highest total in the league. The Pirates dropped from 93 wins in 1912 down to 78 in 1913 and despite an ERA of 2.84, Claude saw his record drop to 14-15 on the year. When the Federal League formed, Hendrix jumped to the Chicago team in the league and had a great season, winning a league high 29 games with a league best 1.69 ERA. When that league folded, most of the Chicago players from the FL were moved to the Chicago Cubs roster. Hendrix finished out his career with five more seasons in the Windy City. He had a 144-116, 2.65 career record.

Mike Simon, catcher for the 1909-1913 Pirates. He was a light-hitting minor leaguer for five seasons before being taken by the Boston Doves (Braves) in the 1908 Rule 5 draft. The Doves sold him to the Pirates on March 1, 1909 and he became the backup catcher to George Gibson. That 1909 season saw Gibson play 150 games, which didn’t leave much playing time for Simon or the other backup catcher, Paddy O’Connor. Simon played just 12 games his rookie season, going 3-for-18 at the plate. He received slightly more time in 1910, but got his first real chance to play in 1911 when Gibson “only” caught 98 games. Simon played 71 games in 1911 and he had a .228 batting average with 22 RBIs in 215 at-bats. In 1912 he batted .301 on the season, but a new catcher named Bill Kelly emerged and he hit .318 in 48 games, leaving Simon with just 113 at-bats all year. Simon took over at the starting catcher in 1913. He hit .247 with 17 RBIs in 92 games behind the plate. Following the 1913 season, the Federal League was formed to help players get a better salary by eliminating the reserve clause and Simon was one of many players to jump to the league. He played two seasons in the FL, and like many of the marginal players who jumped to the league, they didn’t have a Major League job when they tried to come back after the new league folded. He finished his career in the minors in 1917.

Abel Lizotte, first Baseman for the 1896 Pirates. He was a strong hitting minor league outfielder for most of his 17-year career, batting over .300 during at least six of those seasons (his minor league stats are incomplete). For as good as he was in the minors, spending most of his time at the top levels of the minor leagues, his Major League career lasted just ten day in September of 1896. After going 3-for-29 at the plate, with three singles and three RBIs in the last seven games of the 1896 season for the Pirates, Lizotte returned to the minors for another 11 seasons. After his last game, the local paper said that if he could hit like he did in the final game of the season, and not like the first six games, the Pirates might just have something. He played all of his Major League games at first base and he hit third in the batting order. He lived later in life in Wilkes-Barre, Pa, where he had played five seasons and also managed during his last two years (1907-08) in pro ball.