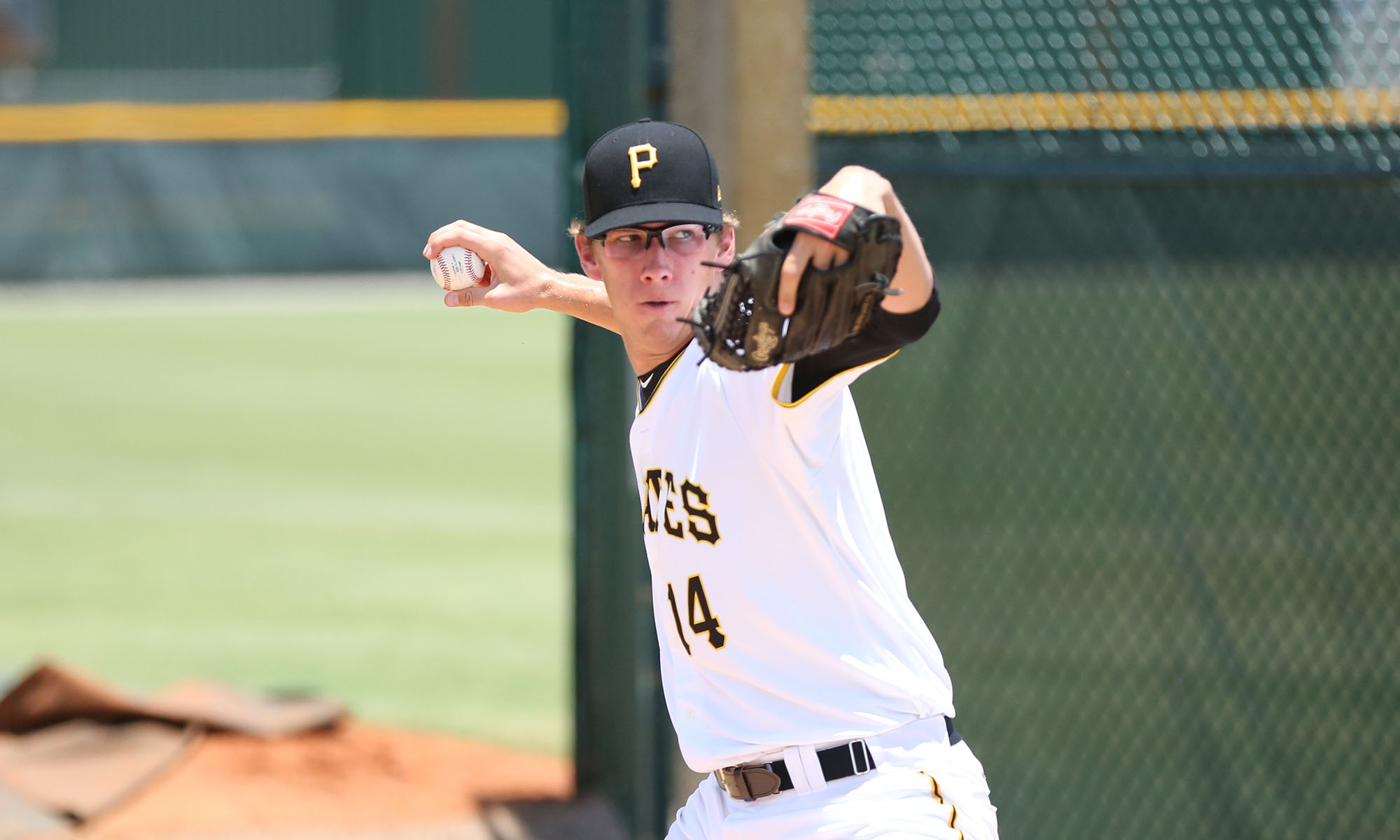 On Monday we started a new series that will be nine parts, looking at the top Game Scores from minor league starting pitchers for the Pittsburgh Pirates. The first article looked at the best from the Indianapolis Indians. That was followed by the Altoona Curve on Tuesday and the Bradenton Marauders on Wednesday. Today is the Greensboro Grasshoppers.

Bill James developed the Game Score for pitchers, which you will see in the boxscores on MiLB. It starts with a base of 50 points and awards points for good pitching (strikeouts, recording outs and pitching late in games), while subtracting points for things such as walks, hits, earned runs and unearned runs.

Below you will find the ten best Game Scores for starters on the 2019 Greensboro Grasshoppers, with a brief description of each game. With tie scores, I just listed them alphabetical, and if it was a tie between multiple starts for the same pitcher, I went in chronological order.

The short-season teams top Game Scores will begin on Monday. Wilbur Miller will finish out the minor league preview this weekend.

Three former Pittsburgh Pirates players born on this date, one trade to talk about and one Opening Day to mention. We start with one of the all-time greats in team history.

Paul Waner, outfielder for the 1926-1940 Pirates. If the Pirates ever created a Mount Rushmore for players, Waner has a strong case to be included there. He retired with a .333 career average, 1,627 runs scored, 3,152 hits, 1,091 base on balls and 1,377 RBIs. With the Pirates, he ranks first all-time in batting average with a .340 mark (Jake Stenzel hit .360, but had less than 2,000 PAs). He also ranks first in doubles with 558 (career he ranks 11th all-time). He is sixth in games played, second to Honus Wagner in both runs scored and triples, third in hits and walks, and fifth in RBIs. When he left the Pirates, he was the team’s all-time leader in home runs. Among all Major League right fielders, he is first in putouts, fourth in assists and second in games played.

He holds the Pirates single season record with 237 hits. He’s also tops on the doubles list with 62, and first in RBIs with 131. He has five of the top ten single season batting averages in team history, four of the top ten in hits, and two of the top ten seasons in runs scored. He led the NL in games played three times, runs twice, hits twice, doubles twice, triples twice, RBIs once and he won three batting crowns. He was the NL MVP in 1927 and finished second in the voting in 1934. Waner batted .333 during the 1927 World Series.

He was voted into the National Baseball Hall of Fame in 1952, then was joined there by his brother Lloyd in 1967, although Paul had passed away two years earlier. The Pirates retired his jersey number 11 in 2007. The Waner brothers combined for 5,611 hits.

On this date in 1937, The Pittsburgh Pirates traded first baseman/right fielder Earl Browne, to the Philadelphia Phillies in exchange for pitcher Joe Bowman. Browne was a September call-up for the Pirates in both 1935 and 1936. He was 26 years old at the time and had hit .273 in 17 total games for the Pirates. Bowman was also 26, and coming off a season in which he went 9-20, 5.04 in 203.2 innings. It was his fourth season in the majors and he had a 21-35 career record. The trade worked out decent for the Pirates in that they got five seasons out of Bowman. He had a 33-38, 4.35 record in 629.2 innings for Pittsburgh. He pitched 134 times, 78 as a starter. Browne was a regular for the Phillies in 1937, playing all three outfield positions and first base. He hit .292 with 52 RBIs in 105 games. The Phillies sold him to the Cardinals just over a month into the 1938 season and he never played in the majors again.

Babe Phelps, catcher for the 1942 Pirates. While with the Dodgers from 1935 until 1941, Phelps was a strong hitting catcher who made three All-Star appearances. Twice he batted over .360 in a season and in 581 games with Brooklyn, he had a .315 average. His last season in Brooklyn was marred by health problems, injuries and a suspension, leading him to play just 16 games in 1941. The Pirates acquired him a four-for-one deal on December 12, 1941 in exchange for shortstop Arky Vaughan. Phelps platooned at catcher with future Hall of Fame manager Al Lopez in 1942 for the Pirates. He hit .284 with nine homers and 41 RBIs in 95 games that season. In April 1943, Phelps was put on the voluntary retired list by baseball for failing to sign his contract for that season within ten days after the start of the schedule. The Pirates tried trading Phelps in May, but the commissioner held up the deal due to his status. They finally dealt Phelps to the Philadelphia Phillies, along with cash, in exchange for first baseman Babe Dahlgren on December 30, 1943. Phelps never reported to the Phillies, instead deciding to retire after 11 seasons in the majors.

Piggy Ward, left fielder for the 1891 Pirates. He made his major league debut just after his 16th birthday, playing one game for the 1883 Philadelphia Quakers (Phillies). Six years later he returned to the majors, this time playing seven games for the 1889 Quakers. Two seasons later, he joined the Pirates for a brief six-game trial in late August, with all five of his starts in left field. The local newspaper at the time was critical of his defense, suggesting he should play third base because he was too slow to cover ground in left field. However, they did like the hitting that he added to the team during his brief stay. Pittsburgh was one of five teams he played for that season, spending time with four minor league teams at some point during the season, in four different leagues. He bounced around a lot during his career, playing for five different Major League teams in six seasons and at least 30 different minor league teams during his 21-year career. Ward hit .333 for the Pirates in 18 at-bats with two RBIs and three stolen bases. He was a .286 hitter in 221 big league games. His minor league stats are far from complete at this time, with a few seasons totally missing and others incomplete, but he is still credited with over 1,600 minor league hits.

On April 16, 1903, the Pirates played their season opener against the Cincinnati Reds. Pittsburgh had won the last two NL pennants and they looked to make it three in a row. Although they didn’t know it at the time, the 1903 season wouldn’t just end with an NL pennant. The Pirates would go on to play a postseason series against the the AL champions Boston Americans, in what would be the first modern day World Series. The Pirates opened up the 1903 season with an easy 7-1 win against the Reds, on their way to sweeping the four-game series. The starting lineup for the Pirates that day was as follows:

That same lineup would start game one of the World Series, with the only change being Ritchey and Sebring were switched in the order.